This month Jed Schwartz had his Bar Mitzvah. And, like many B’nai Mitzvah students, Jed gave a D’var Torah– speaking about his portion and the way that he relates it to issues he cares about. For Jed, one of those issues is LGBTQ inclusion.  Jed’s Torah portion included the infamous line from Leviticus 18 that is often quoted as the basis for outlawing same-sex relationships; so Jed decided to use his time in front of the congregation to speak about equality and how the Jewish community should support LGBTQ rights.

As a requirement of becoming a B’nai Mitzvah, many students perform acts of tzedakah, often planning projects centered on issues that are important to them. As Jed took on this task, he again turned his attention to LGBTQ equality. He created rainbow silicone bracelets, with the word “ahavah” (love) surrounded by Jewish stars. Selling these bracelets, Jed raised several thousand dollars, which he donated to Keshet!

We’re honored by Jed’s donation, and inspired by his dedication to the fight for LGBTQ equality.

Below is the speech that Jed gave at his Bar Mitzvah; 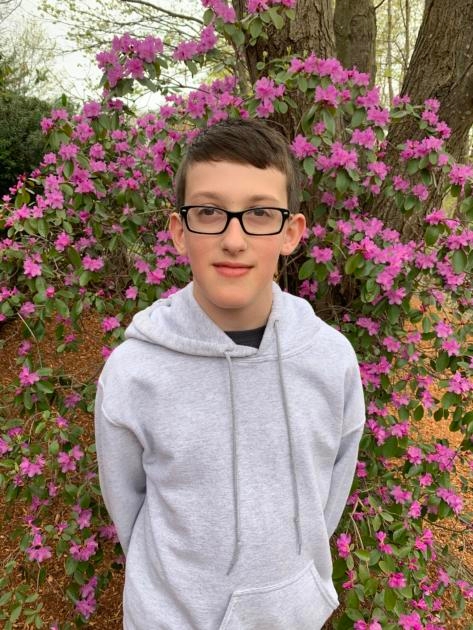 My Torah portion is called “Acharei Mot.” There are three parts of my Torah portion. The first part, Chapter 16, is about Yom Kippur and the rules of Yom Kippur approximately 3,000 years ago, including a lot on the sacrificing of goats. Also, in that same part, it talks about the concept of the Scapegoat. The Jewish people would transfer all of their sins for the whole year onto the chosen goat and send it into the wild to be eaten or die from starvation. In Judaism the importance of the sacrificial goat is it requires Jews on Yom Kippur to publicly acknowledge their sins. This is how the Scapegoat came about and now people use it to blame one person for a group’s problems.

The second part, Chapter 17, is about how to properly sacrifice animals and that you should not drink blood of any kind. I know that only 1 or 2 of you in this room are vampires, so this only applies to you. [pick someone specific to look at]

The third and final part of my Torah portion, Chapter 18, is about what not to do when having a relationship with someone or, as it’s called in the Torah, sexual offenses. The third part is what I’m going to talk about today because it’s the part that I can talk about without boring all of you. Who wants to hear a speech about blood suckers or starving for a day. I’m getting hungry just thinking about that.

Chapter 18 includes many different commandments covering who you can and cannot have relationships with. For example, you can’t have relationships with your mother, step-mother, sister, step-sister, aunt, daughter-in-law, granddaughter, neighbor’s wife, and beast. I’m okay with those, but the verse that really bothers me is Chapter 18 Verse 22 which says “Do not lie with a male as one lies with a woman; it is an abhorrence”. That line over time has caused millions of gay people to be discriminated against and to hide their inner feelings. Just think back around 3,000 years ago when the Torah was written. Many of the 613 commandments are focused on rules that would keep Jews safe, healthy, and growing the Jewish population. I believe the Torah says men should not be with other men because that would not result in growing the Jewish population and could end up shrinking it instead. Today, the purpose of marriage is about so much more than just growing the population.

Amazing people like Abraham Lincoln and Martin Luther King, Jr. have stood up against discrimination of African-American people and many others have stood up against discrimination based on gender, race, age, religion, disabilities, and national origins. For example, my Aunt Robin, who is no longer with us, was a strong voice in Syracuse against discrimination based on disability. In fact, she once chained herself and her wheelchair to a Syracuse city bus to protest a lack of wheelchair access. Uncle Barry, I’m sure you remember that. If we are not allowed to discriminate against any of those groups, why are we allowed to discriminate against gender identity or sexual orientation? Why is it that you can’t discriminate against some things but you can against others? A person is a person. Everyone should be treated the same way no matter who they are and who they have relationships with. No matter who you love, you shouldn’t be punished for that. You should live your life the way you want to live it. Discriminating against people who are different from you — now that is an abhorrence!

I am proud to be part of the Union for Reform Judaism, better known as URJ, and to go to a URJ camp, Camp Eisner for many reasons. One reason is that the URJ supports LGBTQ+ rights and inclusion.

For my B’nai mitzvah project, I have decided to focus on LGBTQ+ rights. I have created and sold rainbow silicone bracelets that have the hebrew word for love, Ahava, surrounded by Jewish stars. All of the profits I have made have gone to Keshet, a non-profit organization, based in Boston, but now national, that helps Jewish LGBTQ+ people gain equality and feel supported in the Jewish community. I have raised over $1,500 already. At the door, when you come in to the party tonight, there will be a donation box and a basket of bracelets if you’d like to support this important cause. I will also be donating a percent of any gifts I receive from my Bar Mitzvah to Keshet.

LGBTQ+ rights are very important to me since I have good friends and close family members that are transgender and gay and its upsets me that they don’t have the same rights across America and the world as non LGBTQ+ people do. No matter who you love or what gender you identify as, or whether you identify with a gender at all, you shouldn’t be punished for that.

Thank you to everyone who helped me get to this day. Thank you to my mother for being there for me and helping me write this D’var Torah. Thank you to my father who helped me practice my prayers, Torah portion, and haftorah portion and who drove me back and forth to hebrew school constantly every single Wednesday. Thank you to my brother helping me make posters and sell bracelets for my bar mitzvah project. He was a great sales person — chasing down anyone who dared to walk by my table at hebrew school without buying a bracelet and bringing them back to me. Thank you to Cantor Doob for helping me with my haftorah. Thank you to Rabbi Perlman and Rabbi Jaffe for helping me with my D’var Torah. Also, a general thanks to my mom, dad, and brother for all of the support they’ve given me over the years. Also thanks to all of you for coming and celebrating this special day with me, especially those of you that have come from far away like California, Florida, North Carolina, Virginia, and Pennsylvania to get here. And of course, special thanks to my friends from Vermont and my camp friends who made a special effort to come.