Anthony Mordechai Tzvi Russell has been the subject of numerous profiles in recent years. Given his unique background—he is a black, Jewish and gay former opera singer who now performs primarily in Yiddish—reporters tend to ask him the same questions over and over again. He is always having to explain who he is, he told me recently, and that gets tiring. 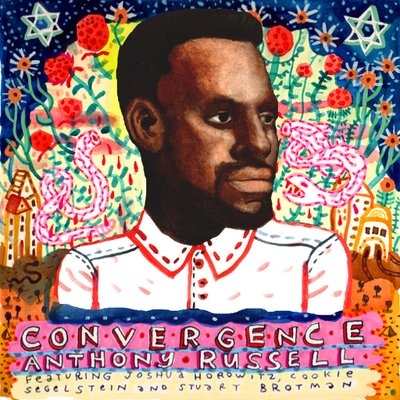 So for this interview, Russell and I decided that we would focus not on his biography but on his music. In August the 37-year-old bass from the Bay Area of California released his debut EP called Convergence. Recorded with the klezmer trio Veretski Pass (Joshua Horowitz, Cookie Segelstein and Stuart Brotman), the album mashes up Yiddish folk songs and African American roots songs in unexpected and transcendent ways. It is complex, defies easy characterization, and forces the listener to reevaluate preconceived ideas. Kind of like Russell himself.

When and how did you start hearing connections between Yiddish and African American music?

It really started in 2012. The way that I tell it is that I was practicing a Yiddish song [“Der Gemore Nign”] and an African American spiritual [“Motherless Child”] which I had learned previously came to mind, and I just started singing one line from one and then another line from the other, and it seemed to fit. So I started performing this piece that I had put together as an encore to an hour of straight up Yiddish music.

You’ve written that you resisted performing spirituals and other African American music for Jewish audiences. What changed for you with this project?

Before this project I usually tended to avoid African American roots music because as a performer, I wanted to avoid being defined by the music and by audiences who were not themselves African American and who brought all kinds of associations to that kind of music and, of course, to me performing that kind of music. But I think I was doing myself a disservice because I was also leaving myself out of that equation.

What would you say to folks who question your decision to combine these two seemingly disparate musical traditions?

The two genres also share these lyric elements that lean heavily on biblical images. One can make the case that all Christian music contains elements that lean heavily on biblical images, but in this case, I’m just talking about African American music because it’s among the music that I’m the closest to. And the images that I grew up with [in the Christian church] were also the images that informed my eventual Judaism, so in that sense, personally, there was a connection there. [Editor: Russell converted to Judaism in 2011 and is married to Rabbi Mike Rothbaum.]

There are certain moments on the album that feel explicitly political, including on a work song called “Rosie” that invokes mass incarceration. Why was it important to you to raise this issue on the album?

It was really important for me to have the sample of the woman saying “more black men are in prison today than were enslaved in 1850” because people have allowed themselves to think that once slavery came to an end, what slavery was materially came to an end, and we know that that’s not true. It was really important for me to be able to broach that in a musical fashion by finding this piece of music, which does not come out of slavery but specifically comes out of the penitentiary system.

It is a political statement, but it’s also a personal statement. The political is personal. I think it’s very hard to be African American and not on a very visceral level feel how much the specter of mass incarceration has affected the lives of black people who live in the United States. As a very artistic and sensitive, expressive black person, I feel like it would only be a matter of time before this very real aspect of African American life came up for comment in my own work, and this is the way in which I did that.

One of the most stirring tracks on the album is called “Zion (Adoration of the Ancestral Shrine).” It sounds so different from everything else. What’s the background for that song?

I used three distinct diasporic documents to create that song. One was a spiritual called “Rockin’ in Jerusalem” in which I felt I could identity a certain African motif. And then there is Av Harachamim from the Saturday morning Torah service, which is by a Russian composer by the name of Danyevsky. So I had these two melodies, which were both about Jerusalem but were both written very far away from Jerusalem. There’s this sort of yearning in each of the pieces of music that just felt captivating to me, and I wanted to have those two respective yearnings in the same place.

What I used to fuse these two respective yearnings together was yet a third diasporic element, which was a Cuban rhythm called the guaguancó, which is a variant of the rumba rhythm which was brought over by slaves directly from west Africa to Cuba.

With the title “Zion (Adoration of the Ancestral Shrine)”, I love the idea of calling Jerusalem an “ancestral shrine” because these are the terms people use to refer to certain holy spaces in African cultures— ancestral and shrine.

What’s your personal relationship to Jerusalem?

The first time I was in Israel in 2016, I got off the plane and I got into an Uber and when I saw a highway sign for Jerusalem, it was like my heart jumped out of my chest because I couldn’t actually believe I was in a place where if I just kept on going down that road, I would be in Jerusalem. I had, I think, a very diasporic idea of what Jerusalem is: It’s this far off place that lives more in the religious imagination than anything else. Suddenly I got on a plane and I got off the plane and then there it was. It was this insanely moving experience for me, and yet while I possess all of these feelings, I also possess this question which is: Why has there been generation after generation after generation of veneration for this place that has been almost impossible to get to?

I think for myself the answer is that Jews and even black people have in their hearts and occasionally in physical space built places that they could call their Jerusalem that were not the physical Jerusalem. In that sense there are many Jerusalems, and we never really know where we’re going to find it. I guess this is my Kabbalistic idea of Jerusalem, where Jerusalem is this element that is shattered and there are pieces of Jerusalem that are everywhere.

What do you hope listeners who are not very familiar with Yiddish or African American music take away from the album?

It sounds terribly corny, and I don’t think of myself as being a corny person, but I want people to listen with their hearts. I want people to feel the kinds of connections through time, space and history that I had to create between these two very different kinds of music.

Outside of this project, I’m very scrupulous about the casual ways in which American Ashkenazi Jews like to express their relationship to African Americans. When somebody of a particular generation interacts with this project and they say, “I totally understand this project…I get the spirit of it…we have so much in common…rabbis marched with Dr. King,” to a certain extent it gets tiring. Even though this project is very much rooted in historical music, I dislike the fact that Jews who are alive today have to express their connections to African Americans in historical terms. I dislike it. I think talking about something as complicated as the African American and the Jewish experiences in historical terms means that we are taking the work of building bridges that people did previously for granted, which is definitely something that we should not do.

There are so many layers to the songs on Convergence that unless the listener is, like, an ethnomusicologist he/she is probably going to miss some stuff! Is that OK with you?

There’s a part of me that resents the necessity to constantly explain something. I think this is very much related to my history as a black man and my relatively recent history as a Jew of color. I think being a Jew of color means always having to explain yourself, and I think on some level I’m very tired of always having to explain, especially when so little has been explained to me. I was just expected to know things [in Jewish contexts].

I’m an autodidact, so I make it my business to know things because I don’t want to look ignorant. So as an artist, I feel like my work is there to be experienced, and I think it’s the work of people who want to experience art to figure out what the meaning is for them.

Who are your musical idols?

Lastly, I have to ask about Twitter because you are very active on the platform (@mordkhetzvi). What is your approach to using Twitter as an artist and a Jew of color?

In some ways I’m an impromptu representative of Jews of color on Twitter. I always have things to say around the subject of being a Jew of color, and oftentimes I try to create a conversation or maybe raise some consciousness around issues that affect Jews of color by using humor or being clever or irreverent. I feel like that has a way of disarming a lot of the casual ignorance with which I think Jews of color are often met. I do want to make you laugh, but I also want to make you think.

Russell will be performing original Yiddish pop songs with accordionist Dmitri Gaskin—the two perform as a duo called Tsvey Brider—at the Museum of Fine Arts in Boston on December 5. Click here for tickets.