Eddna Samuel lives with joy and wonder and adventure. An Indian Jew by birth, she has lived in the United States and India and for the last few months in Israel. She does not like to plan, she just lets things unfold. Since coming to Israel she has lived in 8 places. Some people would be worried about finding the next place, Eddna, seem to take it in stride. She doesn’t mind moving and enjoys the surprise that comes with finding a new possibility. So far she has lived in home-let that had a great garden but no sink in the kitchen as well as the Ritz Carlton hotel.

“It started with six couples, 2,500 years ago,” explains Eddna Samuel. “They were stranded off the coast of Konkan in the State of Maharashtra. They were rescued and brought to the King. He asked them, “what do you know how to do? What special skills can you contribute?” They (the Jews) explained that they were experts in pressing oil, and we can do that, but we cannot work on Shabbat. So the Bene Israel, as the community would become known, was also known as Shanivar Teli, the Saturday oil presser caste.”

“Of course, they were living in India, so they had to eat Indian.” For this cooking class, she has allowed me to bring along a friend and invited filmmaker Oren Rosenfeld who has been filming Eddna’s life for a documentary on Mumbai Jews. The kitchen is tiny but we all pile in and begin to chop and fry. The lack of space does not deter her, as she explains, she has to cook because she gets hungry every two hours!

To start we made chai. Pouring several generous spoonfuls of tea leaves and spices into a pot of water with sugar and bringing it to a boil, she is quick to point out that the main ingredients came with her from India. “I carry a little India with me in my suitcase,” she explains gesturing to a tray of many spices, “there is nothing like the taste of home.” 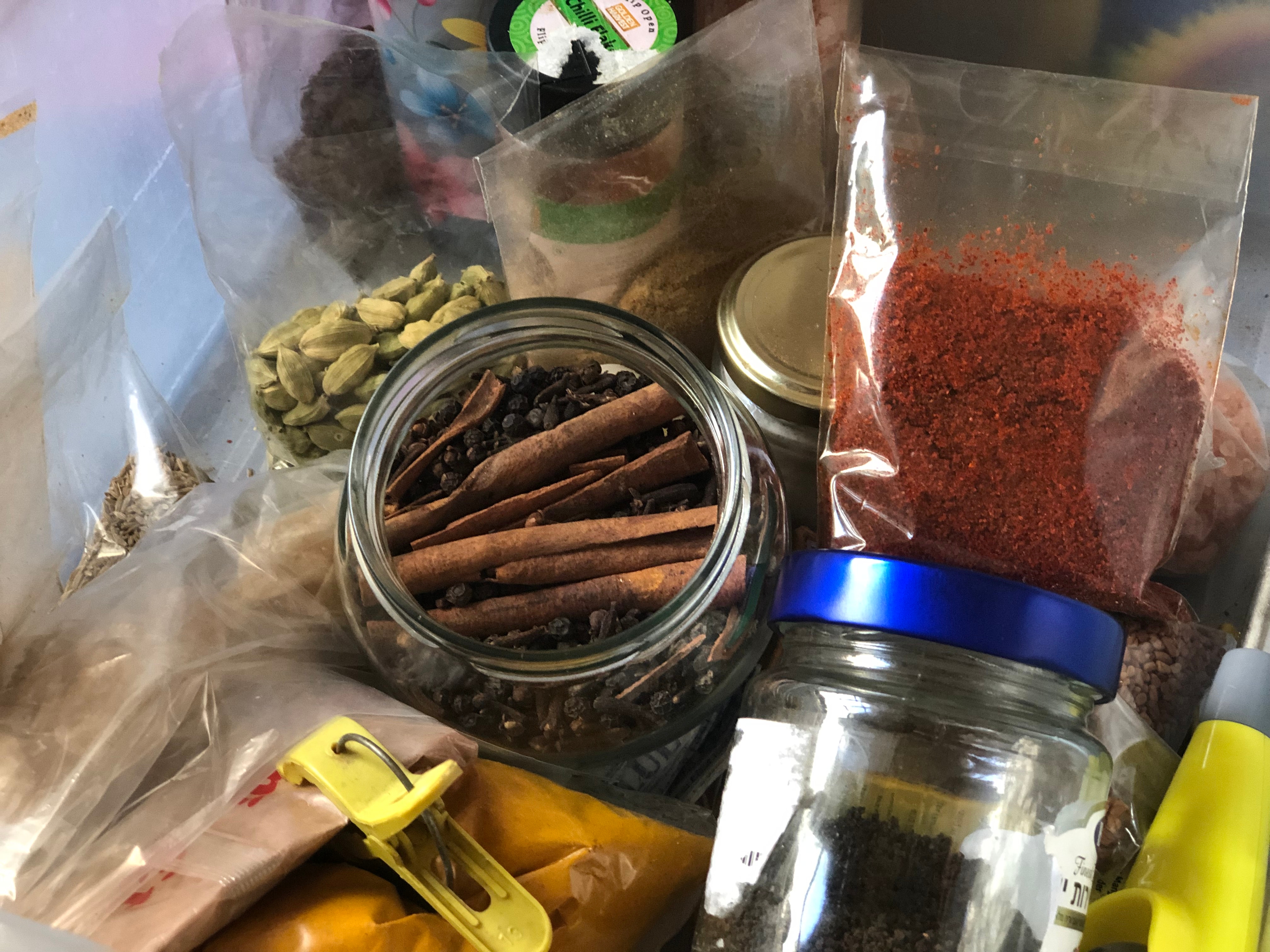 Next, we prepare Upma, a semolina dish that is punctuated with Indian flavors. Tasked with toasting mustard seeds, I cautiously add a small amount. Eddna by contrasts encourages generosity. Laughing, she gestures at her trim figure explaining that they are good for the body. She then skillfully uses scissors to make easy work of cutting flavorful chili and cilantro into small pieces and adding them to the pan. Finally, we add the semolina and some hot water and just like that this classic dish is done. Eggs are must in my breakfast Masala Omelets were also on the menu. Masala means spice and in this case, the eggs were flavored with onions, and once again chillis, and cilantro. While these dishes are not unique to the Jewish community, Eddna is quick to point out that “this is the way Jews have been eating in India” for over years.

While we worked we discussed the unique role of Eliyahu HaNavi, Elijah the Prophet, in Indian Jewish life. Eliyahu is said to have been the guardian angel that watched over the original six Jews who came to India and assured their safety. As a result, he is revered and prayed to by Indian Jews around the world even to this day.

When I ask Eddna, if Indian Jews have depictions of Eliyahu HaNavi in their homes, the look of surprise on her face implies that she could not imagine it otherwise. “Yes, of course, we have a picture of him going up to heaven in his chariot. And we also do a Malidah whenever there is a happy occasion such as setting off on a journey, an engagement or house warming” The Malida is an offering of flattened sweetened rice that is served piled high on a silver platter surrounded by fruits and decorated with coconut and nuts. “We invite friends to join in us as we offer the Malida and say prayers in praise of Eliyahu HaNavi.” Like the food, this tradition is a seamlessly Indian-Jewish. Its origins coming from the tradition of offerings in the days of the Holy Temple in Jerusalem and influenced by the Hindu ritual offerings as well. “Don’t forget,” Eddna reminds me, “Eliyahu HaNavi was dark skinned like me!”

Upma is a porridge made with semolina / rava, and green chilies. It is a traditional South Indian breakfast dish. Upma is so easy to make and can be done in 15-20 minutes. 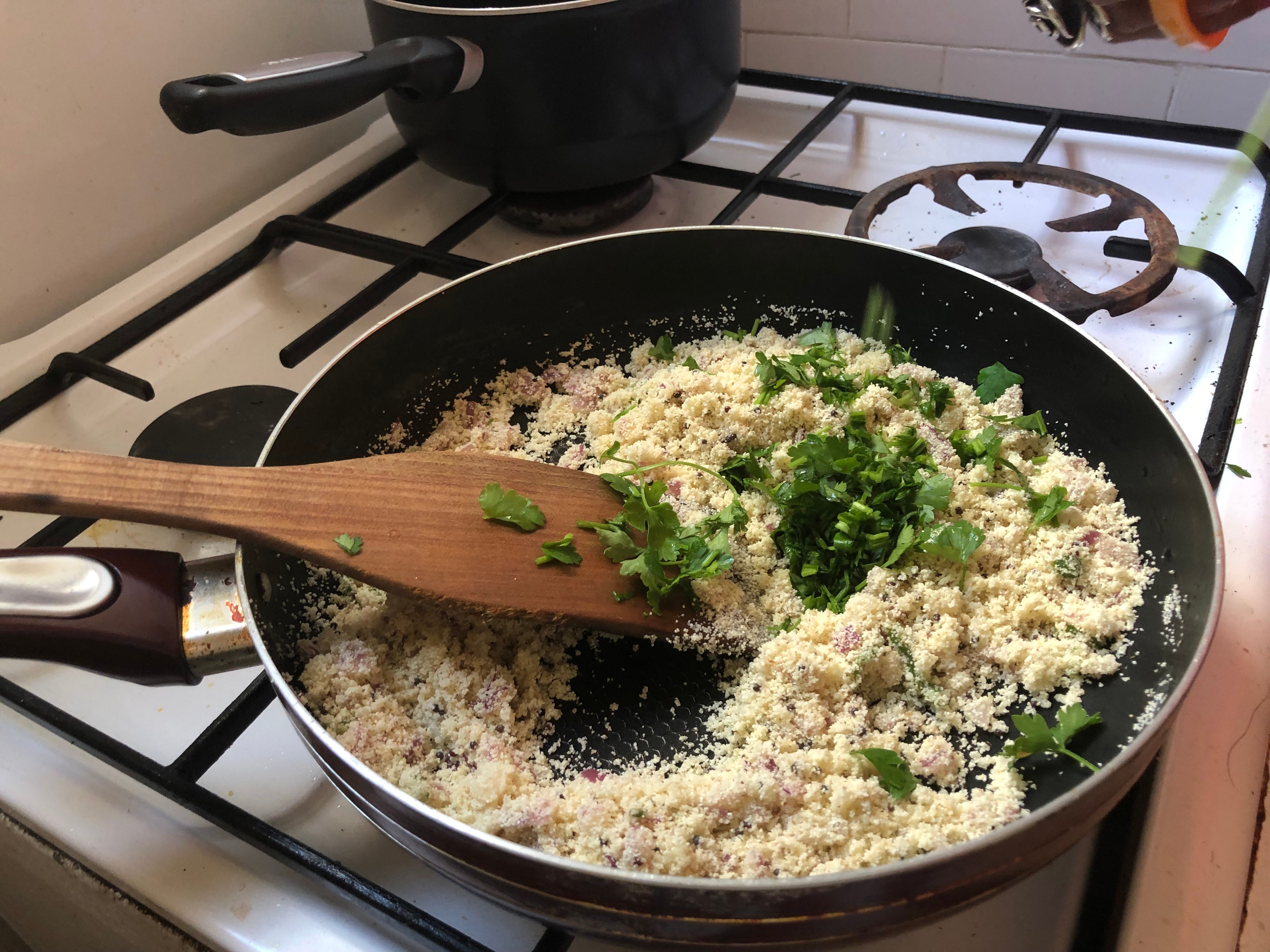 Dry roast the semolina or sooji on a low flame for about 5 minutes. Set it aside.

Heat oil in a pan and add the mustard seeds, Saute until they are a light brown color.

Add the chopped onion and saute until they are translucent.

Add water and salt and bring it to a rolling boil.

Slowly add the roasted rava or semolina and stir continuously to avoid any lumps.

Cover and cook over a medium-low flame for 3 – 5 minutes or until the rava/mixture gets cooked.

Give it a mix and finally add cilantro

In a nonstick pan, fry the onion and chilies in oil until soft but on brown.

In the meantime, whisk eggs until frothy.

Add cilantro and salt to the eggs.

Once the onions and chilies are softened you can pore them into the egg mixture and stir.

Pour the egg mixture back into the pan and let set.

Lift sides and scrape middle to edge to allow for even cooking.

Serve with bread and Indian pickle. 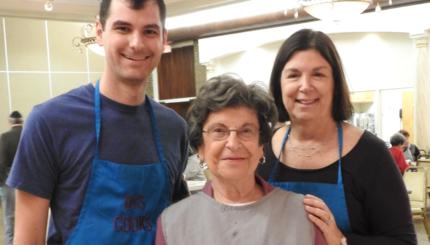