As we near the end of Tracate Yoma, today’s daf reads like a greatest hits collection of ideas related to atonement. We see a strong critique of those who sin intending to repent and then sin again afterward. (No fake atonement!) We find the source for the popularly quoted idea that one needs to ask forgiveness at least three times. (People might need to hear “I’m sorry” more than once!) And we revisit an idea we’ve seen recently (Yoma 85) that Yom Kippur atones for sins between humans and God, but not between individual humans.

All of these are powerful ideas can help us understand why Yom Kippur has had such staying power even among less observant Jews. After all, it was the power of a Yom Kippur service in Berlin in 1913 that convinced German philosopher Franz Rosenzweig not to leave Judaism and led to his deep engagement with Jewish learning. He ultimately became one of the preeminent Jewish thinkers of the 20th century.

The last 87 pages have provided us with the choreography of the Yom Kippur rituals and its indelible teachings, largely as regards the high priest and the complex Temple ritual, but today we focus on the main individual mitzvah of the Viddui, the public confession. While the Temple practice is no longer observed in our day, the Vidduiremains an emotional cornerstone of Yom Kippur.

The Gemara explains that an individual recites the Viddui on Erev Yom Kippur, during the evening service, after their Amidah prayer (and the prayer leaders offer it in the middle of their Amidah prayer). Today, it is recited throughout the holiday.

You may be familiar with the modern text of the Viddui, an alphabetic acrostic of wrongdoings that it is assumed members of the community have succumbed to in the previous year: Ashamnu (aleph), bagadnu (bet), gazalnu (gimmel), dibarnu dofi (dalet). We have sinned, we have betrayed, we have stolen, we have slandered. It goes on and on as the congregation beat their breasts with each sin recited.

In the rabbinic period, the text of the Viddui was not yet fixed. As we have seen in Tractate Berkahot and elsewhere, the rabbis often do not have a completely fixed text in mind and offer multiple versions of a given prayer. On today’s page, Rabbi Yehuda offers a short prayer that can serve as the Viddui that gets straight to the point:

For our iniquities are too many to count and our sins are too great to number.

My God, before I was formed I was unworthy. Now that I have been formed, it is as if I had not been formed. I am dust while alive, how much more so when I am dead. See, I am before You like a vessel filled with shame and disgrace. May it be Your will that I may sin no more, and as for the sins I have committed before you, erase them in your compassion, but not by suffering.

But it’s Mar Zutra, a 5th-century rabbinic sage in Babylonia, who offers the simplest version:

We said only that one must follow all these versions when he did not say the words: aval anachnu hatanu — but we have sinned.

Tractate Yoma includes thousands of words, countless images, endless ideas and digressions. But these three words from Mar Zutra — aval anachnu hatanu, but we have sinned — manage to sum everything up.

As Shakespeare, a bard of a very different era, quipped: “brevity is the soul of wit.” Mar Zutra’s words manage to capture the core, Yom Kippur on one foot, without the flowery embellishments. At its core, Yom Kippur, like many things in Judaism, is a communal experience. “We” stands out as a key part of this phrase. “We” are bound together as a people across space and time. “We” are not islands, but are responsible for the fates of others whether they sit next to us in synagogue or if they are on the other side of the world. Mar Zutra reminds us that “we” are all in this together. It is not easy for each of us to individually admit that we have failed. But when we understand that we shoulder this failure together, it becomes an easier burden to bear.

Read all of Yoma 87 on Sefaria.

This piece originally appeared in a My Jewish Learning Daf Yomi email newsletter sent on July 7th, 2021. If you are interested in receiving the newsletter, sign up here. 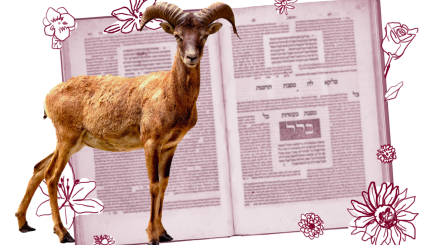 Doing the work of repentance.