According to Mishnah Sukkah 4:9–10, the priests performed a special ceremony each day of the holiday of Sukkot — a water libation. They would fill a golden jug with water from the Siloam pool in Jerusalem. They would then ceremonially carry the jug to the Temple, and pour the water out into a basin placed on the altar. This ceremony concluded with a truly epic celebration featuring blazing candelabra, people juggling fire torches and a crowd dancing to the music created by all manner of musical instruments. As the Mishnah declares: One who did not see the celebration of the place of the drawing of the water never saw celebration in his days.

The Mishnah and the Talmud contain extensive discussions of this ritual, both in Tractate Sukkah (stay tuned!) and in our tractate, Yoma. But the biblical text contains no mention of it at all. And that fact explains one of the stranger episodes described in today’s daf.

But what’s going on in this weird episode? Why is the priest performing the ritual wrong? And why do the people throw their etrogs at him in protest?

The medieval commentator Rashi suggests that the priest is a Sadducee, a member of a Second Temple Jewish sect which accepted Scripture as authoritative but not the Oral Torah. Since the Festival of the Water Libation is not actually mentioned in the Written Torah, this priest’s action was a protest against the integration of rituals which only appear in oral tradition. According to Rashi’s interpretation, the people’s response is thus a strong defense of the Oral Torah and the festive rituals that it mandates.

It’s worth noting, however, that pelting leaders with etrogs seems to be a traditional Jewish form of political protest. The first-century Jewish historian Josephus recounts one episode in the reign of the Hasmonean king Alexander Janneus. According to Josephus (Jewish Antiquities XIII, 372):

“At a festival which was then celebrated, when he (Alexander Jannaeus) stood upon the altar and was going to sacrifice, the nation rose up against him and pelted him with citrons [which they then had in their hands because] the laws of the Jews required that at the feast of Tabernacles everyone should have branches of the palm tree and citron fruits, which we have elsewhere related. They also reviled him as descended from a captive and therefore unworthy of his office and of sacrificing.” (Translation from Lawrence Schiffman, Texts and Traditions.)

In this episode, the problem seems not to be related to the ritual of water libation, but to the people’s perception that this Jewish king and high priest, a member of the dynasty descended from the Maccabees, was unfit to serve as a priest at all.

The holiday of Sukkot was the perfect time for public protest. As a pilgrimage festival, Jews came from all over the world to Jerusalem to celebrate. Issues such as political leadership or which sources of authority shaped their ritual lives would have come to a head as people crowded together to celebrate. And in a world where kings and priests were not always accountable to their followers, what better way to get your leaders to pay attention to your needs than by throwing sacred fruit at them in the Temple in Jerusalem? Now that’s a Water Libation Festival to remember.

Read all of Yoma 26 on Sefaria.

This piece originally appeared in a My Jewish Learning Daf Yomi email newsletter sent on May 7th, 2021. If you are interested in receiving the newsletter, sign up here. 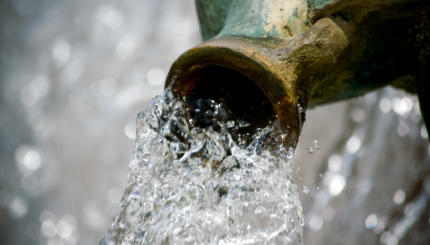