Back on Yoma 15, we learned that some of the rabbis objected to turning to the left. There’s actually a word for this: sinistrophobia. On today’s daf, we’ll learn that rabbinic sinistrophobia wasn’t limited to Temple matters and that using one’s left foot in a ritual might render it illegitimate.

The context is our continuing discussion about the particulars of halitzah, the ritual for the nullification of the levirate obligation in which the widow removes the yavam’s shoe and spits. Does it matter if she removes a shoe from the right foot or the left foot? The mishnah on today’s daf tells us that if she removes the left shoe, the halitzah is invalid. Rabbi Elazar dissents.

What’s the issue with the left foot? The Gemara tells us:

Ulla’s reasoning is a piece of rabbinical logic we’ve seen many times already: the gezeirah shavah. In Leviticus 14:14, we read that a priest is required to smudge blood on the big toe of a leper’s right foot as part of a purification ritual. Since the same word for foot — regel — is also used with respect to halitzah, the rabbis conclude that the right foot must be used there too.

But not so fast! The rabbis aren’t entirely convinced that this gezeirah shavah holds up. They note that, in some cases, the words invoked in establishing a gezeirah shavah must be “free” — that is, the word is contextually unnecessary and therefore must be included solely for the purposes of allowing us to link the two texts. Here, the word “foot” is not free. It’s required to describe the ritual of halitzah.

And even if they are not both free, what refutation is there? It can be refuted, as the leper requires cedarwood, hyssop, and scarlet thread.

The rabbis’ position is that the process of purifying a leper is uniquely specific, requiring the sprinkling of blood and several particular materials: cedar, hyssop and scarlet thread. A comparison to halitzah may therefore be inapt, which allows the Gemara to conclude that removing a shoe from the left foot during halitzah might be acceptable.

This debate rages on into the Middle Ages (see the Or Zarua for an example of one opinion, including a discussion about a left shoe on the right foot.) But at least for the rabbis in the Talmud, there’s no inherent connection between the foot of a leper and the foot of a yavam, allowing us to conclude that maybe the rabbis’ fear of left-ness wasn’t quite so strong.

Read all of Yevamot 104 on Sefaria.

This piece originally appeared in a My Jewish Learning Daf Yomi email newsletter sent on June 19th, 2022. If you are interested in receiving the newsletter, sign up here. 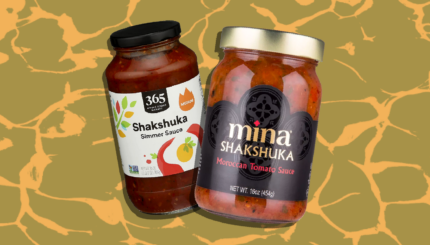 The Best Shakshuka Sauce to Buy at the Supermarket

These starter sauces make the easiest meal ever.