For many American Jews and for many Americans in general, lox is the luscious topping to their Sunday morning bagel and schmear (generous portion of cream cheese).

Lox is always made from salmon and is very expensive. In this regard, it is different from many other iconic Jewish foods, like gefilte fish and herring, which are made from ingredients that are easy to acquire and cheap — an important consideration for historically poor Jewish communities.

The American History of Bagels and Lox

Because lox is such an expensive item, Claudia Roden writes in The Book of Jewish Food, there is no evidence that the Jews of Eastern Europe ate it in the shtetls. The widespread availability and interest in lox did not come about until Eastern European Jews arrived in America in the late 19th and early 20th centuries.

In the 1920s and ’30s lox actually became quite affordable, due to the availability of salmon from the Pacific Northwest, which was brought east to New York via the transcontinental railroad. Lox was easy to use and keep, because it did not need refrigeration. Home refrigeration was available starting in the mid 1920s, but many new immigrant families did not yet have this newfangled appliance. For observant Jews, lox had an additional perk: It could be eaten with any meal — meat or dairy–because fish is pareve (neither meat nor dairy).

No one knows exactly who put the winning triumvirate of bagels, cream cheese, and lox together. Cookbook author Joan Nathan suggests that it was most likely born through an advertising campaign for Philadelphia Cream Cheese. Others simply suggest that it was an “anonymous genius.” It became the perfect answer to the rest of America’s typical Sunday breakfast of bacon, eggs, and toast.

While lox may be delicious, the term is quite confusing — what we now call lox, derived from the German word for salmon, lachs, is in fact smoked salmon. True lox is brined in a salty solution, which cures the fish, but also leaves a strong, salty taste. Today, lox is cured with a light salting and then cold-smoked, which provides the typical “Nova” or smoked salmon flavor. The word lox is now used interchangeably with smoked salmon, and the most popular Sunday-morning item sold at Zabar’s in New York City — over 2,500 pounds per week–is not “real lox” actually, but smoked salmon.

READ: What Are the Different Kinds of Lox?

Unfortunately, lox has become an even more complicated issue with current fishing trends. As wild salmon becomes increasingly scarce, the use of salmon farming has increased dramatically. Over 80 percent of salmon sold in the United States comes from farms, which raises health and sustainability issues, documented in this 2003 article in the New York Times, “Farmed Salmon Looking Less Rosy.”

However, it is now easy, while still not cheap, to purchase sustainable, wild-caught salmon at specialty stores, or at Trader Joe’s and Whole Foods. Though you’ll spend on the fish, you can save money by learning to cure it yourself.

The easiest way to make homemade lox is to follow the Scandinavian form of Gravlax, which is cured salmon in a salt-sugar solution. This process skips the smoking step, an unrealistic task for most home cooks.

How to Make Your Own Lox

How to Make Gravlax 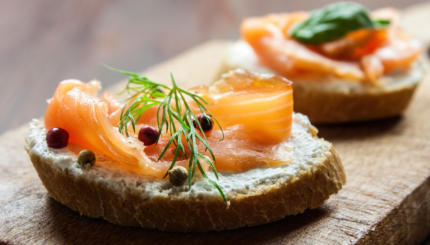 How to Make Your Own Lox

The classic Jewish brunch food is more affordable -- and surprisingly easy -- when you make it at home. 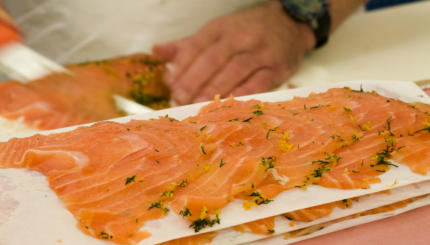