The crusty ring‑shaped bagel — the word means “bracelet” in German — which was the everyday bread of the Jews in Eastern Europe, has become the most famous Jewish food in America and a standard American bread. Like challah, it is of South German origin, but it came into its own and took its definitive form in the Polish shtetl.

It was sold on the street by vendors with baskets or hanging on long sticks. Hawkers had to have a license. Illegal selling of bagels by children was common and viewed as respectable, especially by orphans helping their widowed mothers, but if they were caught by a policeman they would be beaten and their baskets, bagels, and linen cover would be taken away.

Because of their shape-‑with no beginning and no end‑‑bagels symbolize the eternal cycle of life. In the old days, they were supposed to be a protection against demons and evil spirits, warding off the evil eye and bringing good luck. For these reasons, they were served at circumcisions and when a woman was in labor and also at funerals, along with hard‑boiled eggs.

When the Jews left Eastern Europe in great masses for America, Canada and Europe, many sold bagels from pushcarts on the Lower East Side of Manhattan and in the East End of London. When my great‑uncle Jacques immigrated to New York from Syria at the turn of the century, the only jobs he could get were peddling door-to-door and selling bagels from a pushcart. He found this so demeaning that he migrated back to Egypt, where a large part of his family had settled. A month ago in Paris, his widow, Régine, told me of his difficulties in communicating in either English or Yiddish, and of his surprise when he first encountered bagels.

Although so many new varieties of bagels have now appeared in New York, purists will have only the original plain water bagels, which are made by throwing rings of risen dough into violently boiling water for a few seconds, then draining, cooling, and baking quickly till golden, shiny, and crisp. They are wonderful when very, very fresh and still spongy inside but quickly become tough and leathery, in which case the best thing is to cut them open and toast them. New York is said to make the best, supposedly be­cause of the mineral content of their water. 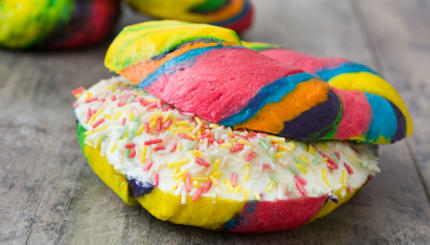 The 7 Most Horrifying Bagels Ever Invented

From kimchi to mac and cheese, people are desecrating the sacred bagel. 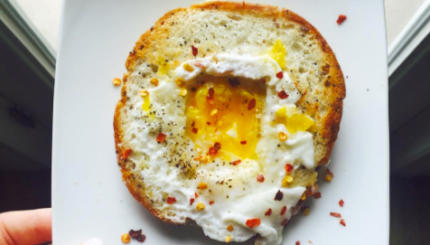 Why eat your fried egg on a bagel when you can have an egg in your bagel?

The Best (And Worst) Way to Cut a Bagel

The other day, Tech Insider posted a video about “the best way to cut a bagel.” Intrigued, yet skeptical of ...