Ushpizin: Inviting in Our Ancestors on Sukkot

Maimonides admonished that anyone who sits comfortably with his family within his own walls and does not share with the poor is performing a mitzvah not for joy but for the stomach. In addition to extending personal invitations to the needy (in former times it was customary to have at least one poor person at a Sukkot meal; today donation of funds often is a substitute), we open our homes symbolically.

With a formula established by the kabbalists in the 16th century, based on the earlier Zohar, on each night of Sukkot we invite one of seven exalted men of Israel to take up residence in the sukkah with us. “When a man sits in the shadow of faith (sukkah) the Shekhinah (Divine Presence) spreads Her wings on him from above and Abraham and five other righteous ones of God (and David with them) make their abode with him? A man should rejoice each day of the festival with these guests.”

The inspiration for hakhnasat orekhim (hospitality to guests) goes back to our first patriarch, and the first guest honored, Abraham. He would sit outside waiting for the opportunity to invite dusty wayfarers into the shade of his tent, and then run to prepare a meal of the choicest ingredients. (A midrash based on the apocryphal Book of Jubilees claims that the first booth, on which the holiday Sukkot is based, was built by Abraham when he greeted the three Angels who came to tell him his wife Sarah would at last bear a child Genesis 18:1-10. Jubilees 16:21 traces other observances of Sukkot to Abraham’s tents in Beersheva, where he erected an altar and circled it while praying.)

We perform a short ceremony to welcome the ushpizin (Aramaic for “guests”). The full text for the invitation that they join us, including prayers that our fulfillment of the mitzvah of sukkah will be worthy of Divine favor, is printed in a full daily/festival siddur (prayer book). Then, on the first day we say, “I invite to my meal the exalted guests, Abraham, Isaac, Jacob, Joseph, Moses, Aaron, and David. May it please you, Abraham, my exalted guest, that all the other exalted guests dwell with me and with you – Isaac, Jacob, Joseph, Moses, Aaron, and David.” On each day, a different one of the seven is singled out, in order.

The Sephardim (Jews of Spanish or Mediterranean ancestry), who often set aside a special chair laden with holy books for the ushpizin, invite the patriarchs, then the leaders/prophets (Moses and Aaron), then royalty (Joseph and David). They often send provisions to the poor along with a note saying, “This is the share of the ushpizin.” Recently, it has become popular in some circles to invite matriarchs and other important women of Israel — Sarah, Rachel, Rebecca, Leah, Miriam, Abigail, and Esther — either paired with the men or on their own.

In addition to serving as a reminder of our duty to the poor (it is said that the ushpizin would refuse to enter a sukkah where the poor are not welcome), each of these exalted personages represents uprootedness. (Abraham left his father’s home for the land God promised to show him [Genesis 12:1], Isaac went to Gerar during a famine [Genesis 26:1], Jacob fled from his brother Esau to the habitat of Laban [Genesis 28:2], Joseph was sold to merchants and taken to Egypt [Genesis 37:23-36], Moses fled to Midian after inadvertently killing an Egyptian [Exodus 2:11-15] and he and Aaron wandered the Sinai for forty years [beginning with Exodus 13], and David hid from Saul in the wilderness [ISamuel 20, 21].)

Each in his wanderings contributed to the world through a respective personal characteristic: lovingkindness, strength, splendor, glory, holiness, eternity, sovereignty. Reflecting the periods of homelessness and wandering in their lives, our temporary dwellings can inspire us to emulate the benefits they brought to the world. Many people put up plaques or pictures of the ushpizin,containing the blessing and scenes from their lives. (Laminated ones are available in Jewish supply stores.)

Excerpted  from  Celebrate!: The Complete Jewish Holidays Handbook. Reprinted with permission of the publisher. Copyright 1994 by Jason Aronson Inc. 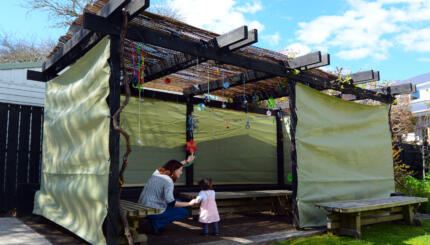 Text of the Ushpizin Service

Some recite this short prayer each night of Sukkot, inviting one of seven ancestral guests into the sukkah.