Embedded in a three-page treatment of Hanukkah and its ritual in the Talmudic tractate Shabbat 21a-24a is a seemingly offhand, yet surprising question: “What is Hanukkah, anyway?”

This question appears, seemingly out of nowhere, in the midst of a rabbinical discussion about kindling the Hanukkah lights. But shouldn’t it have been obvious to the Rabbis what Hanukkah was? People were presumably celebrating it already in commemoration of the Maccabean victory, and one might think that the Rabbis simply needed to clarify the legal and ritual requirements.

It turns out, however, that the Rabbis were uncomfortable with the existing rationale for Hanukkah, namely the Maccabean victory; and their answer to the question “What is Hanukkah?” provided an entirely different source for the holiday, the miracle of the single cruse of oil that lasted for eight days. The Rabbis taught:

On the 25th day of Kislev begin the eight days of Hanukkah, on which lamentation for the dead and fasting are forbidden. For when the Greeks entered the Temple, they defiled all the oils in it, and when the Hasmonean dynasty prevailed over them and defeated them, they searched and found only one bottle of oil sealed by the High Priest. It contained only enough for one day’s lighting. Yet a miracle was brought about with it, and they lit with that oil for eight days. The following year they were established as a festival, with Hallel (prayers of praise) and Thanksgiving (Shabbat 21b).

The historical story of Hanukkah — as it is related in First and Second Maccabees, ancient works that the Rabbis decided not to include in the Jewish biblical canon — is of the Maccabees’ military victory over Antiochus’s Syrian Greek armies and their Hellenist sympathizers. That being the case, why do the Rabbis decide to focus entirely on this miracle of the oil?

The 16th-century Maharal of Prague, Rabbi Judah Loew, offers a concise answer to this puzzling rabbinical emphasis on the miracle of the oil:

The main reason that the days of Hanukkah were instituted was to celebrate the victory over the Greeks. However, so that it would not seem that the victory was due only to might and heroism, rather than to Divine Providence, the miracle was denoted by the lighting of the Menorah, to show that it was all by a miracle, the war as well.

The longer answer about why the Rabbis changed Hanukkah’s meaning in midstream has to do with the Rabbis’ historical context, their lives under Roman rule, their attitudes toward the decadence of the Hasmonean dynasty, and their rabbinic theology, which celebrated learning and prayer over physical strength.

For the Rabbis, the destruction of the Temple in 70 C.E. and the devastation following the Bar Kokhba revolt of 135 C.E. were historically too close for comfort. They knew that Jewish attempts to challenge mighty powers by military means had failed dismally, and they feared the repercussions of celebrating the military victory of the underdog Maccabees against the powerful Syrian Greeks and the reestablishment of Jewish sovereignty in Judea.

They may have worried about potential Roman reprisals, but certainly did not want to encourage Jews to engage in a suicidal rebellion against their Roman rulers. They may have also been concerned about the possibility of harsher religious restrictions being imposed by the Romans.

Worse yet, they had combined the priesthood and the kingship, nullifying the separation between religious and political power that had been traditional in Israel. Ultimately, the Hasmoneans became the very Hellenists against whom the Maccabees had fought. Eventually, they invited the Roman Empire to be protectors of Judea, paving the way for the Roman conquest. Finally and perhaps most importantly, the Hasmoneans had supported the Sadducees, the priestly party, against the Pharisees, the spiritual progenitors of the Rabbis. Indeed, the Pharisees suffered a period of intense persecution during the late Hasmonean period.

Rabbinic Ambivalence and the Transformation of Hanukkah

Given their ambivalence about the Maccabean victory, the Rabbis had a problem: What could they do about the popular holiday established by the Maccabees and celebrated each year on the 25th of Kislev? They could get rid of it, as they had done with other holidays instituted by the Maccabees and their descendants — after all, Hanukkah was not a holiday of biblical origin. Or they could transform the meaning of Hanukkah in line with their own theology, which is what they did.

The Rabbis’ first tack seems to have been to try to suppress the holiday altogether. The books of the Maccabees, which recount the historical events surrounding the genesis of Hanukkah, were not included in the biblical canon. (The books of First and Second Maccabees are still accessible today only because they were incorporated into Catholic and Orthodox Christian Bibles.) Among the Jews, these books are called sefarim hitzonim, external books, or in Greek, apocrypha, and the Rabbis expressed their opinions about such books in no uncertain terms in Mishnah Sanhedrin 10:1. Following a list of several categories of individuals “who have no share in the world to come,” Rabbi Akiva adds, “Also one who reads the external books….” Otherwise, the Mishnah is virtually silent about Hanukkah, except to refer to a “ner Hanukkah” in Baba Kama 6:6.

Only later, in the Gemara, particularly in Shabbat 21a-24a, do we see the Rabbis begin their transformation of Hanukkah with a new rationale for the holiday’s significance, the miracle of the oil. This legend about the oil is the most revealing clue of the Rabbis’ intentions for their re-imagined holiday of Hanukkah. Through this story, the Rabbis were able to give prominence to God while diminishing and even nullifying the role of the Maccabees. The miracle was no longer the military victory, but rather that a single cruse of oil sustained the lights in the Temple Menorah for eight days.

The raison d’etre assigned by the Rabbis to Hanukkah is made even more explicit by the haftarah — prophetic reading — they selected for the first Shabbat of Hanukkah. The reading from the book of Zechariah is about the prophet’s mystical vision of the rededication of the Second Temple. When the prophet sees a dream vision of a golden menorah, he asks an angel to explain its meaning, and the angel responds: “This is the word of the Lord to Zerubbabel: Not by might, not by power, but by My spirit—said the Lord of hosts” (Zechariah 4:6). Again, God’s role is paramount.

The Al Hanissim (“for the miracles”) prayer — recited during the Amidah and the Blessing after Meals throughout Hanukkah — also echoes this rabbinic perspective. In this prayer God is entirely responsible for the successful military revolt, whereas Mattathias and his sons are reduced to mere time markers as to when the events occurred (“in the days of the Hasmoneans”).

The prayer emphasizes God’s role, particularly with its insistent repetition of the word “you”:

We thank You also for the miracles, for the redemption, for the mighty deeds and acts of salvation, wrought by You, as well as for the wars which You waged for our fathers in days of old, at this season. In the days of the Hasmonean, Matityahu son of Yohanan, the High Priest, and his sons, when the iniquitous power of Greece rose up against Your people Israel to make them forgetful of Your Law, and to force them to transgress the statutes of Your will, then did You in Your abundant mercy rise up for them in the time of their trouble; You pleaded their cause, You judged their suit, You avenged their wrong, You delivered the strong into the hands of the weak, the many into the hands of the few, the impure into the hands of the pure, the wicked into the hands of the righteous, and the arrogant into the hands of those that occupied themselves with Your Law….

Just as the Rabbis of yesterday endowed the holiday with a meaning appropriate for their day and time and their religious theology, Jews today are finding in Hanukkah old and new meanings that resonate strongly. Some emphasize the nationalist and military aspects of Hanukkah, others the Maccabees’ role in defending religious freedom, and still others the metaphorical themes of light versus darkness, as expressed in a Secular Zionist Hanukkah song, “We have come to expel the darkness. With fire and light in our hands, each one of us is a small light, but all of us together are a powerful light.”

The rabbinical willingness to reinterpret the historical Hanukkah and endow it with new theological import is echoed in the efforts of today’s Jews to reflect and refract the history and texts of Hanukkah to create new images for their own lives. 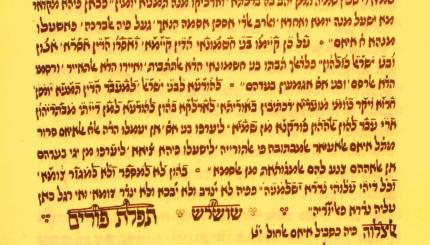 A Megillah for Hanukkah?

The case for reviving a tradition of reading the Scroll of Antiochus.

The holiday we celebrate today is a rabbinic creation.