How Zechariah Relates to Sukkot

The modern reader is likely to ask questions about Zechariah’s oracles, which are hard to understand today. If one wonders whether his own contemporaries were able to follow his message, the answer cannot be a straightforward yes or no.

Zechariah had extraordinary visions of things to come at the end of time. They told of happenings that no one had ever experienced; they put the familiar upside down and doubtlessly created astonishment among his listeners. Could everyone follow him? Probably not; but those able to read a transcript of his words could study his predictions and ponder hidden meanings.

The modern reader does the same, but in addition has to discover afresh what to the Prophet’s audience were familiar allusions. They knew about “living waters” and about the rainfall in Egypt; words like Mount of Olives, Aravah [Arabah], Geba, Rimmon, Eastern and Western seas did not have to be explained to them. The location of the gates in Jerusalem required no commentary, and Sukkot and its water festival were as much part of their lives as Thanksgiving Day is in North America.

Zechariah must have startled his contemporaries with his broad visions. He was a prophet who tied the fate of Israel closely to all humanity, and by doing so spoke of the future of Israel and that of nations far off in almost the same breath. With Jerusalem the spiritual capital of the world, and idolatry having disappeared, the Eternal would be the sole divinity whom people would adore.

The Prophet did not challenge his listeners to assist God so that this might come to pass. He did not think of missionaries traveling to the far ends of the globe in order to convert others to Judaism. If religious movements elsewhere were doing this, he did not know about them. For him, the sole motive power in this spiritual revolution was God, and none other. The time of the end would come when God was ready.

Zechariah’s messianic vision became in time the religious property of his people. The Eternal’s name would be on all lips, Zechariah foresaw, and by his vision, fortified a sense of pride and happiness in his contemporaries. The Temple was not just another building, it was a place of holy striving, where the flame of faith was kept burning for the time when God would make Jerusalem the goal of one vast human pilgrimage.


Reprinted with permission from The Haftarah Commentary published by Union of American Hebrew Congregations. 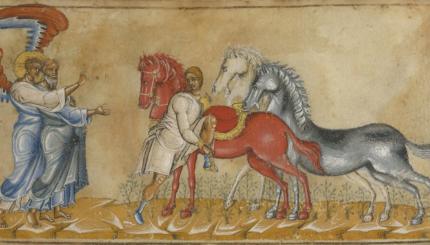 These three prophets are principally concerned with the status of the Temple, the new religious hierarchy, and the religious obligations of the post-exilic community.

The Sukkah shelters a messianic ideal.