Tisha B’Av, the ninth of the month of Av, is a day of mourning for Jews. It is the day Jews remember the destruction of both Temples that once stood in Jerusalem as well as a number of other tragedies that have befallen the Jewish people over the course of history.

A three-week mourning period preceding Tisha B’Av begins on the 17th day of the month of Tammuz. According to the Mishnah, this was the day the Romans succeeded in breaching the walls of Jerusalem in 70 C.E.; the Mishnah also mentions other tragic events that occurred on this day in Tammuz. This three-week period leading up to the major fast of Tisha B’Av is called “Bayn Ha-Metsarim“–“in the Straits.” Traditional Jews do not get married or celebrate other joyous festivities in these three weeks.

Nine days prior to Tisha B’Av, a new period of more intense mourning begins. Traditional Jews do not eat meat, cut their hair, or wash their clothes unless they are to be worn again during the nine days. All these actions are considered signs of joy or luxury inappropriate for this time of mourning. Reform, Reconstructionist, and Conservative Jews adopt a varied range of these practices.

The Shabbat immediately preceding the festival is Shabbat Hazon (vision). The name derives from the haftarah (prophetic reading) for the day. Taken from Isaiah 1, the reading describes Isaiah’s vision of national disaster befalling the Israelites because of their sins.

Tisha B’Av cannot be observed on Shabbat, so if the date falls on Shabbat, the festival is postponed until Sunday. On such occasions, there are some small changes to Maariv (the evening service) on Shabbat. Also, during havdalah (the concluding ceremony of Sabbath), the blessing over the wine is postponed until after the fast on Sunday night, though the blessing over the twisted candle is still said at the close of Shabbat.

Tisha B’Av is a full fast day, so the last meal must be eaten before sunset prior to the ninth of Av. This meal marking the boundary between periods of eating and fasting is called the “seudah ha-mafseket.” The meal often is comprised of round foods like eggs or lentils, which symbolize mourning in Jewish tradition because they evoke the cycle of life. Some people eat an egg or bread sprinkled with ashes, and some Jews may sit on the ground during the meal. The birkat hamazon (grace after meals) is said individually and in silence.

In addition to abstaining from food or drink during Tisha B’Av, Jewish tradition also mandates refraining from wearing leather, engaging in sexual relations, washing one’s body, and using perfume or other such ointments. Visiting cemeteries on this day is encouraged, as if to heighten the sadness.

Uniquely on Tisha B’Av, Torah study, meant to be joyful, is not permitted. Some parts of the Bible or Talmud are allowed, like Job or Jeremiah, or sections of the Talmud or Midrash that discuss the destruction of Jerusalem. In the synagogue, the lights are dimmed and the ornamental parokhet (covering) is removed from the ark as a sign of mourning before the evening service. Congregants remove their leather shoes and do not greet each other.

Megillat Eicha (the Scroll of Lamentations)–which is a lament for the destruction of the First Temple — is chanted during the Maariv service, along with several kinot, elegies or dirges written at different periods of Jewish history. The kinot speak of the suffering and pain of Jewish tragedy through the ages. An extended set of kinot are traditionally recited during the morning service, and some communities repeat the chanting of Eicha in the morning as well. The traditional Torah reading is Deuteronomy 4:25-40 and the Haftarah is Jeremiah 8:13-9:23, which is chanted to the same tune as Lamentations the night before.

Tallit (prayer shawl) and tefillin (phylacteries), usually worn during morning services, are instead worn during Minchah (the afternoon service). During Mincha, prayers that were omitted in the morning are recited. The Torah and Haftarah are the same as on other public fasts.

The meal ending the fast traditionally omits meat and wine, in acknowledgment of the fact that the burning of the Temple continued until the next day. Finally, the sorrow that began on the 17th of Tammuz comes to a halt and the Shabbat immediately following Tishah B’Av is called Shabbat Nahamu (Shabbat of comfort) because the Haftarah begins with the words “nahamu nahamu ami” (“comfort, comfort my people”). This begins a period of consolation and comfort leading up to Rosh Hashanah, the Jewish New Year. 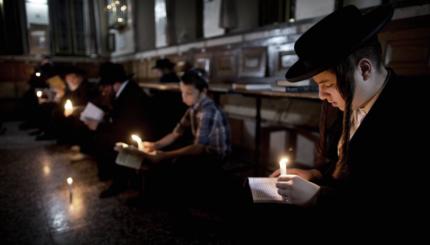