Jerusalem is the capital city of the State of Israel, and one of the oldest cities in the world. It is a holy city to Jews, Christians, and Muslims, and is home to the Western Wall, the Church of the Holy Sepulchre, and two important mosques: The Dome of the Rock and al-Aqsa. Judaism has a strong religious connection to Jerusalem, and a belief that the city itself is connected to the Holy Temple which once stood there.

The very existence of Jerusalem makes it a constant source of struggle between religions, groups, and individuals, for access to and control of some of its many religious sites. This is caused by several factors: Its centrality to the State of Israel, its status as the capital of the country, and the intense connection to Jerusalem of Judaism and other religions.

A Jewish History of Jerusalem

Jerusalem was established as a city by King David. His son Solomon built the First Temple there, establishing Jerusalem as a spiritual center, and virtually the entire nation converged on the city several times each year, bringing harvest-offerings and other sacrifices.

In 597 BCE, Jerusalem was ransacked, the Temple destroyed, and the Israelites put into exile by the Babylonians under King Nebuchadnezzar. They returned in 312 BCE, though subsequent raids, wars, and exiles followed–including the conquest of Israel by Antiochus and the Syrian-Greek army of the Hanukkah story. In the year 70 CE, the Roman Empire invaded Jerusalem, and in the ensuing centuries the city belonged to a series of rulers from the Byzantine Empire to the Crusaders to several caliphates and sultanates. A 400-year rule by the Ottoman Turks ended in with the city being controlled by the British in 1, and subseqently as the centerpiece of a partition plan to split Israel in two.

Following the Israeli War of Independence in 1948, Jerusalem was divided. In 1967, following the Six-Day War, the city was reunited under Jewish rule. The Hebrew date of its anniversary, the 28th of the Jewish month of Iyar, was declared as Jerusalem Day, and each year it is celebrated by the city’s Jewish residents and Jews around the world.

Today, Jerusalem is a permanent home and a travel destination to millions of people of all religions. Nothing speaks of the bond between Jerusalem and the Jewish religion more than the closing words of the Passover seder, which are the culmination of a ritual-feast that lasts many hours: “Next year in Jerusalem!“

From the land of Israel to Diaspora. 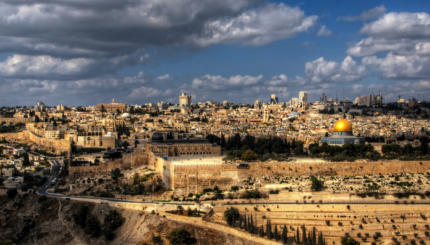 The 14th and 15th blessings of the Amidah pose some difficult theological questions.