Themes & Theology of Nature & the Environment

Jewish prayer and liturgy include a number of recurring themes that reflect the historic theology of Judaism. The most basic theme of Jewish worship is the belief in God as Sovereign of the universe. It follows from this that we human beings, and in particular the Jewish people, are the subjects of this Sovereign. The relationship allows each party to have expectations of each other, which are reflected in the ideas and words of the prayers we recite.

One expectation is an orderly universe, a universe based on immutable laws and rules that we can know. These laws, broadly called Torah, allow for mutual accountability. God demands obedience of us, and we demand of God fair application of the law.

However, before the prayer services as we know them came to be, our ancestors worshipped God primarily at the Temple in Jerusalem with its sacrificial rites and rituals. The memory of this history is preserved in every prayer service, but it is most conspicuous on the Sabbath and Festivals. On these days, there is an added service that is almost entirely about the sacrifices and rites performed in the ancient Temple on these special days.

The recitation of this additional service, it should be noted, is one of the distinguishing characteristics that differentiate the streams of Judaism. Orthodox and most Conservative congregations retain the service, while Reform and Reconstructionist congregations only include some elements of it.

There are other essential themes expressing more fully the relationship between God and humanity, and between God and the Jewish people. Franz Rosenzweig, a 20th-century German-Jewish thinker and teacher, pointed to three dominant themes of Judaism based in Scripture and developed not only in Jewish prayer, but also through Jewish holidays and festivals. These themes are Creation, Revelation and Redemption, and they inform us about different aspects of the sovereign-subject relationship.

Creation explains how the relationship originates: we are creatures brought into existence by God. As God’s creations, we have a loving relationship with God that allows us to turn to God on a daily basis and in times of need, and demands that God respond in our best interest. That does not mean that God always, immediately and fully grants our requests, but there is always a response.

Revelation explains how we Jews learn the laws and rules of the universe that we are expected to follow. Through prophets and teachers, beginning with Abraham and flowing through Mount Sinai, by means we often do not quite understand, God makes the knowledge we need available to us. In our liturgy, we thank God twice daily for the gift of revelation, an expression of God’s love for the people Israel. On those days that portions of the Torah are read, we re-enact, as it were, the receiving of Torah at Mount Sinai.

Redemption explains the past and the continuing involvement of God in the life of the Jewish people. The primal, historic experience of redemption was the Exodus from Egypt, and we are promised that redemption will occur in the future as it has in the past.

When referring to God’s activity in the world, Jewish liturgy frequently employs the continuing present-tense form of the Hebrew verb — e.g. “– who lifts up those who fall…”– indicating that the action ascribed to God has been ongoing since the beginning of time and will continue indefinitely. Thus, God is understood as an active participant in the life of the universe, in the lives of humankind, and in the life of the Jewish people on a daily basis, as God has always been and always will be.

The act of praying is not only a recitation of words affirming ideas about God, but is an attempt to enter into God’s presence and engage in dialogue on a profound, intimate level. 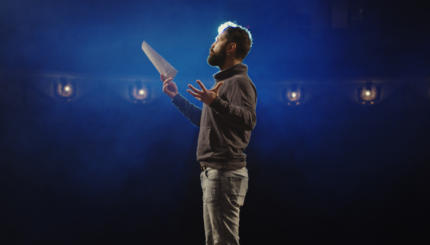 How approaching the siddur like an actor handles a script can deepen the prayer experience.