Bringing The Cycle To An End

Shavuot is one of the least understood of all the major Jewish holidays. While everyone knows what Passover is all about and how we celebrate it, for many, the significance of Shavuot remains unclear. As a result, this important holiday sits unnoticed, observed by far fewer Jews than the more popular Passover.

The Eighth Day of Passover

The truth is, Passover and Shavuot are actually two parts of the same whole; two holidays inextricably connected to one another through spirit and time. Where’s the connection? In the simplest sense, the very name of Shavuot gives it all away. Most Jewish holidays have names that reference their times or most noteworthy practices: on Sukkot we sit in sukkot, on Yom Kippur (The Day of Atonement) we atone for our sins, etc. The name Shavuot , however, betrays nothing of the holiday’s own function. Instead, it links it to the prior holiday–emphasizing that this holiday is celebrated a certain number of weeks (in Hebrew, shavuot) after Passover.

This connection is very significant, going far beyond a simple accounting of days. Throughout the Talmud, the rabbis use the word Atzeret (meaning stop), to refer to the holiday of Shavuot, and not the word Shavuot itself. Why would that be? A look at another "Atzeret" sheds some light. The festival of Shemini Atzeret (the assembly of the eighth) occurs the day after the seven-day fall holiday of Sukkot. While Shemini Atzeret feels like just another day of Sukkot, it is in fact an entirely different holiday. Tied inexorably to Sukkot by its placement and its name, however, Shemini Atzeret serves as a conclusion the week-long holiday.

In the same vein, Shavuot (Atzeret), can be considered the "eighth day" to the seven-day holiday of Passover. This notion of Shavuot acting as an eighth day conclusion to Passover takes true, practical form in our counting of the Omer. From the second day of Passover onward, we count days in groups of seven to form weeks, and we count weeks until we’ve reached a total of seven. After these 49 days we celebrate Shavuot, which is seen as the eighth "day" following the groups of seven which began on Passover. The counting of the Omer seeks to continuously remind us that the true conclusion of Passover is yet to come. In fact, Nachmanides (Leviticus 23:36) even goes so far as to equate the days of the Omer to Hol Hamoed, the intermediate days between the beginning and end of a festival.

What meaning does Judaism give to the number eight? In mystical thought, seven is considered to be the number that represents "teva," or the natural order of things: for instance, a week has seven days and there are seven years to the agricultural shmita (sabbatical) cycle. Since eight is one number greater than seven, it has come to represent "limalah min hatevah," or the supernatural. Some recognizable supernatural eights include Chanukah, a holiday of eight days commemorating a public miracle, and brit milah (circumcision), done on the eighth day to signify a covenant between the Jewish people and God that transcends the natural order.

Another way to think of the dichotomy between "teva" and "limalah min hatevah" is physical versus spiritual. Strictly speaking, the holiday of Passover is "a seven," it is a holiday of seven days, and thus relates to the physical. While the events of Passover are no doubt supernatural (the plagues, the splitting of the Red Sea, etc.), what we are celebrating in essence is our redemption from the physical bonds of slavery in Egypt.

The exodus from Egypt, however, was only the first step in our transformation into Am Yisrael, or the Jewish people.

Simply put, the reason why the Jewish people were taken out of Egypt was to receive the Torah. The exodus alone granted us physical freedom, but it was freedom without purpose. It was the acceptance of the Torah at Sinai that solidified our nation-hood, as the verse mentioned above says, "and I will take you to me for a people and I shall be a God to you." There is a one-to-one connection between the covenant with God and the Jews’ status as a people.

Thus, Shavuot serves as the final "day" of Passover, the last step in our redemption from Egypt and our ascent to be the people of God. But the question remains: If Shavuot is really like the eighth day of Passover, why do we celebrate it almost two months later?

The answer is in the spiritual journey. It’s important to assess the character of the Jews at that time. The Zohar teaches that during their time in Egypt, the Jews had sunk to the 49th level of tuma, spiritual impurity, perilously close to the fiftieth level from which no one can be redeemed. Spending over two hundred years entrenched in a land of immorality and idolatry had left the Jews almost devoid of their spiritual connection to God.

Plainly, this could not stand; the Jews needed to receive the Torah. But immediately upon exodus from Egypt, it would have been impossible for them to experience the revelation at Sinai in their present state. The spiritual impurity within them simply could not have withstood the direct revelation of God at Mount Sinai. So, a period of cleansing was in order, a seven-week interlude through which the Jews could rise from this 49th level of impurity. As each day passed they grew closer to God, until they reached the fiftieth day, when they were finally fit to receive the Torah.

We mark the same seven-week period that the Jews did through our counting of the Omer, drawing day-by-day, much as they did, closer to God. The continuous counting serves to remind us that the redemption did not end with Passover. Had we been taken out of Egypt but not experienced the revelation at Sinai, it would not have been enough, no matter what the popular seder song "Dayeinu" may say. The process was not complete until the festival of Shavuot, when what began with Passover finally came to its fitting conclusion–spiritual, as well as physical, redemption. Perhaps it is fitting, then, that Sukkot has no physical observances; on this intensely spiritual holiday, we honor God not with ritual, but by dedicating our souls and our minds.

Shavuot has no specific rituals because it is all about receiving God's Torah. 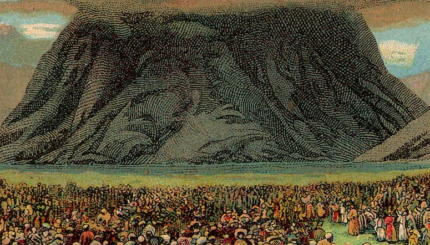