The Passover Haggadah demands that each person see him or herself as having personally come forth out of Egypt. Accordingly, the seder is one of the most sensory-heavy  rituals of the Jewish year. During the seder, we don’t just tell the story of the Exodus, we see, smell, feel, and taste liberation.

Many of the elements of this sensory experience appear on the seder plate (k’arah), which serves as the centerpiece of the seder table. The seder plate traditionally holds five or six items, each of which symbolizes a part (or multiple parts) of the Passover story.

What’s On the Seder Plate

Karpas represents the initial flourishing of the Israelites during the first years in Egypt. At the end of the biblical book of Genesis, Joseph moves his family to Egypt, where he becomes the second-in-command to Pharaoh. Protected by Joseph’s exalted status, the family lives safely for several generations and proliferate greatly, becoming a great nation. The size of this growing population frightens the new Pharaoh, who enslaves the Israelites, lest they make war on Egypt. Even under slave conditions, the Israelites continue to reproduce, and Pharaoh eventually decrees that all baby boys be killed. In the course of the seder, we dip the karpas in salt water (Ashkenazi custom) or vinegar (Sephardi custom) in order to taste both the hope of new birth and the tears that the Israelite slaves shed over their condition.

Karpas also symbolizes the new spring. One of the names for Passover is Hag Ha-Aviv or the “holiday of spring.” Right around Passover the first buds emerge, and we look forward to the warmth and sense of possibility that accompany the beginning of spring. Some Ashkenazi Jews use a potato for karpas, as green vegetables were not readily available in Eastern Europe.

This mix of fruits, wine or honey, and nuts symbolizes the mortar that the Israelite slaves used to construct buildings for Pharaoh. The name itself comes from the Hebrew word cheres or clay. Ashkenazi Jews generally include apples in haroset, a nod to the midrashic tradition that the Israelite women would go into the fields and seduce their husbands under the apple trees, in defiance of the Egyptian attempts to prevent reproduction by separating men and women.

Sephardic recipes for haroset allude to this fertility symbolism by including fruits, such as dates and figs, mentioned in Song of Songs, the biblical book that is most infused with images of love and sexuality.

This bitter herb allows us to taste the bitterness of slavery. Today, most Jews use horseradish as maror. Originally, though, maror was probably a bitter lettuce, such as romaine, or a root, such as chicory. Like life in Egypt, these lettuces and roots taste sweet when one first bites into them, but then become bitter as one eats more. We dip maror into haroset in order to associate the bitterness of slavery with the work that caused so much of this bitterness.

A second bitter herb, used in korech or the Hillel sandwich, which consists of matzah and bitter herbs (some add haroset as well). Many Jews use horseradish for maror and Romaine lettuce or another bitter green for hazeret. Others use the same vegetable for both parts of the seder, and do not include hazeret on the seder plate at all.

A roasted lamb shank bone that symbolizes the lamb that Jews sacrificed as the special Passover offering when the Temple stood in Jerusalem. The zeroa does not play an active role in the seder, but serves as a visual reminder of the sacrifice that the Israelites offered immediately before leaving Egypt and that Jews continued to offer until the destruction of the Temple. Vegetarians often substitute a roasted beet, both because the red of the beet resembles the blood of the sacrifice and because the Talmud mentions beets as one of the vegetables sometimes dipped during the seder.

A roasted or hard-boiled egg that symbolizes the hagigah sacrifice, which would be offered on every holiday (including Passover) when the Temple stood. The roundness of the egg also represents the cycle of life — even in the most painful of times, there is always hope for a new beginning.

How Is the Seder Plate Arranged?

There are a few traditions regarding the arrangement of items on the seder plate. Most commonly, the maror is placed in the middle of the plate. The hazeret is at the six o’clock position followed by, moving clockwise, karpas (seven o’clock), beitzah (11 o’clock), z’roa (one o’clock), and haroset (five o’clock).

What Else Is On the Seder Table?

Many contemporary Jews add additional items to the seder plate to symbolize modern liberation struggles. The most common new item is an orange, which honors the role of women and/or gays and lesbians in Jewish life. The orange symbolizes the fruitfulness that these previously marginalized communities bring to Jewish life. Some Jews place an olive on the seder plate to signal hope for eventual peace between Israelis and Palestinians.

One way to encourage participation in the seder is to ask each guest to bring one item that, for him or her, represents liberation. Participants might bring family heirlooms that remind them of their family’s immigration story, newspaper stories about current liberation struggles, or other symbolic objects. Each guest should place this item near the seder plate and, at an appropriate time in the seder, explain its significance. 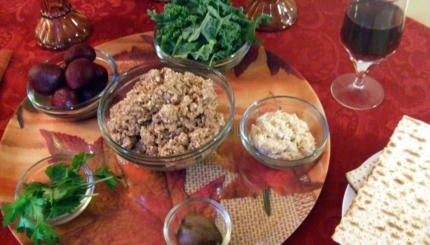