The Haggadah, which means “telling” in Hebrew, is a written guide to the Passover seder, which commemorates the Israelites’ Exodus from Egypt. The Haggadah includes various prayers, blessings, rituals, fables, songs and information for how the seder should be performed. Although modern Haggadot (the plural of Haggadah) can vary widely, the tradition of reading a book to guide the seder dates back to the Middle Ages, and some of the elements that make up contemporary Haggadot were used 2,000 years ago.

What’s Inside the Haggadah

Most Haggadot begin with instructions for the order of the seder (the word “seder” means “order” in Hebrew) and go on to include rituals like the blessings over the four cups of wine that will be consumed, the custom of washing one’s hands, and an explanation for various traditional items on the seder table including the seder plate, which contains the bitter herbs and other symbolic foods. There is usually a break in the seder for the meal and the Haggadah is picked up again before the seder is completed.

Haggadot usually include the 10 Plagues, the Four Questions — customarily read or sung by the youngest seder participant — and songs about liberation and freedom. “Dayenu” is one of the most recognizable songs in the Haggadah. It is more than 1,000 years old and thanks God for all of the miracles and gifts he has given to the Jewish people. The chorus “dayenu” translates to “it would have been enough for us.”

Haggadot vary widely in length and outlook. While some Haggadot are printed only in Hebrew and do not stray from the original text, many newer Haggadot explore alternative meanings for common seder symbols or encourage seder participants to reflect on the larger themes of emancipation and redemption and to explore their own personal feelings of persecution and freedom.

Some Haggadot have become historical artifacts or well-known cultural touchstones. One of the oldest Sephardic Haggadot in the world is known as the “Sarajevo Haggadah,” believed to have been created in Barcelona by Spanish Jews around 1350 and bought by a museum in Bosnia in 1894. The Sarajevo Haggadah was created in the medieval style of illuminated manuscripts. Some of its pages are stained with wine — evidence that it was used at seders dating back to the 14th century.

While traditional Haggadot focus on the ancient story of the Exodus from Egypt, some Haggadot suggest we can understand the enslavement and freedom of our ancestors only by reflecting on present-day political situations. In the late 1930s, the Polish-Jewish political artist Arthur Syzk created an illustrated Haggadah with watercolor images in which he paralleled the story of Pharaoh’s oppression to the rise of fascism in Europe. After Syzk’s Haggadah, it became more popular to draw connections to modern political struggles.

In 1969, the political activist and rabbi Arthur Waskow published the “Freedom Seder” Haggadah, which drew comparisons between the slavery and liberation of the ancient Jews to contemporary struggles such as the civil rights movement and women’s movement. The Stonewall Seder is an LGBTQ Haggadah that began as a seder celebrated by the Berkeley Queer Minyan for Gay Pride Weekend. It has been updated and expanded by members of the B’nai Jeshurun synagogue in New York. And because many modern Jews connect the themes of Passover with social justice, a number of social justice Haggadot or supplements speak to various communities and causes that might lie outside the Jewish community like the Black Lives Matter movement, hunger, and labor justice issues.

One of the most famous Haggadot in modern history is the iconic Maxwell House Haggadah, published by the Maxwell House coffee company to market their coffee as a “kosher for Passover” choice for an after dinner drink. Maxwell House’s Haggadah was offered alongside its coffee cans in supermarkets throughout the United States beginning in 1932, and is still offered at supermarkets for free with a purchase of Maxwell House coffee. It has been updated over the years and even made it to the White House, where it was used at a 2009 seder hosted by President Barack Obama.

Making Your Own Haggadah

Today, seder hosts can choose from a plethora of published Haggadot on the market, as well as a growing number of digital versions now available for free (often as downloadable PDFs) like this one and this one.  In addition, some Jews opt to create their own Haggadot. If that option appeals to you, read How to Make Your Own Passover Haggadah.

A DIY Haggadah adds a personal touch to your seder and can make for a more meaningful holiday. 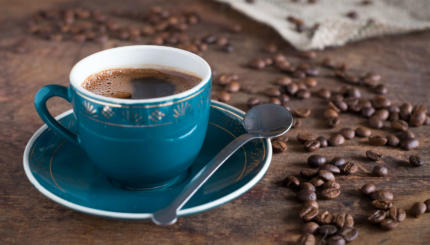 How Coffee Became Kosher for Passover

The interesting history of coffee and Passover in America.

Passover is fast approaching, which means it’s time to prepare to lead, or participate in, a seder. It can be ...