The latter part of the book of Exodus describes the construction of the mishkan, the portable tabernacle that served as the focus of God’s presence during the Israelites’ wanderings in the desert and beyond. These sections are characterized by a love of regularity and order. The same carefully selected few carry out the same intricately prescribed rituals the same way each day, using sacred objects, which have been standardized down to the last detail.

Each aspect is described twice, first as God commands Moses, and then in its actual implementation, which matches the plans almost to the letter. In contrast, extemporaneous religious expressions, like the Golden Calf, are hazardous at best. There is no room for the novel amid the routine.

This week’s and last week’s parshiyot [Torah portions], when taken together, shed further light on the essential tension between tradition and innovation, routine and novelty, within the Jewish religious experience. Last week’s parsha, Terumah, describes the collection of donations and provides the plans for the tabernacle itself as well as the most important implements, including the ark, the altar, the table and the menorah.

This week’s parsha, Tetzaveh, then focuses on standardizing the human factor–first, the garments that the priests will wear, and then the ritual that will initiate Aaron and his descendants into that noble task. At the very end of Tetzaveh, separated from the accounts of all the other primary implements, comes the commandment to create an altar to be used for incense (Exodus 30:1-10).

Many commentators address the question: Why should this small acacia-wood altar, covered with beaten gold, be listed separately from the others? The Meshekh Hokhmah [a biblical commentator] suggests that of all the implements, it alone is not strictly necessary for the functioning of the tabernacle. The lights may not be lit without a menorah, the sacrifices may not be offered without the main altar, but incense may be offered even if the golden altar is absent; therefore, as an optional accessory, it is listed after the standard equipment.

Also commenting on Exodus 30:1, Ramban [Nahmanides] offers the opinion that there is a functional difference between the altar and the other types of implements. The other implements serve the role of bringing God close to the Jewish people. The incense fulfills the special role of “stopping the plague,” assuaging God’s anger at ritual infractions taking place in the divine presence. This role only becomes necessary after the rest of the implements have been put into place, after God has been brought near.

This view is particularly striking given that the actual construction and dedication of the mishkan are bookended by two catastrophic divine responses to inappropriate ritual experimentation. In each case, it is gold or incense that is central to the original infraction. The simplest understanding of the biblical chronology would have the incident of the Golden Calf brewing even as God showed Moses the plans for the golden altar. Nadav and Avihu, Aaron’s sons, were killed (according to Ramban, at that very altar) as they offered up incense in a way not commanded by God, thus ruining the culmination of their appointment as Kohanim [priests].

Ramban’s interpretation is not extraordinary in its sensibility that in human encounters with the divine, strict adherence to ritual is the only way to avoid utter disaster. Indeed, the very incense itself would seem to deter innovation. Omitting or changing even one ingredient (Talmud Tractate Kreitot 6a) makes one liable for the death penalty. Yet, Ramban’s interpretation of the golden altar, as a concession to the possible need for human failure, and the need to expiate for such variances, in and of itself reflects a degree of flexibility within the ritual tradition, a responsiveness to human needs and weaknesses.

Even within the routine, daily offering of the incense, an allowance was made to ensure continued novelty and freshness of the time-honored ritual. According to the Mishnah (Yoma 2:1-4), in the ancient temple there were systems of rotations and lotteries to determine which priests would be assigned the various tasks associated with the daily Tamid offering and other aspects of the rite that were carried out day in and day out without fail. The third lottery, for offering the incense, was unique because it was only open to those who had never done it before.

The Talmud (Yoma 26a) proposes one reason for this practice–anyone who offered the incense was assured of wealth, and there was a desire to make sure that that blessing would be spread as widely as possible. This practice had the equally important auxiliary effect of ensuring that each day, there would be someone coming to the morning’s routine with the excitement of doing something for the first time. The incense was not only a column of smoke, but also a breath of fresh air.

To be sure, there are positives and negatives to having a particular role always filled by a novice. No one wants to be a surgical resident’s first patient, but in ritual matters the question is more nuanced. In synagogues where there is a Bar/Bat Mitzvah every week, the Haftarah [prophetic reading] can be a weekly trade-off between the electricity of a new, life-changing moment and the comfort of a talented “old hand” at work. What is not in doubt is that each new person who comes to a ritual brings his or her own unique signature and point of view, and has the capacity to enrich the communal understanding.

The altar and the incense offered upon it are signs that it is possible, and moreover necessary, to seek out freshness within the bounds of tradition. While some novel modes of religious expression, like the Golden Calf or the incense of Nadav and Avihu, are “outside the bounds” of Jewish practice, there is a place for the golden incense altar, legitimately created to address new needs and situations. The Meshekh Hokhmah‘s understanding of the role of the altar encourages us to consider the value of the optional, of the additional, alongside the mandated minimums. The lottery of the incense reminds us of the necessity of inclusion, of finding ways to see even the most mundane daily practice through new eyes and of making every time feel like the first time. 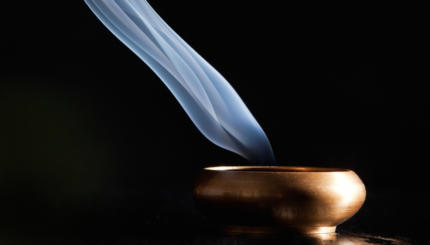 The incense reminds us to unite our bodies and souls in our service of God and to imbue our lives with holiness, purity, compassion and hope.

The high priest's breastplate reminds us of the numerous ways to understand text and reality.