Darkness unsettles us. As children we went to sleep with a small light on; as adults we prefer to come home to a dwelling not totally dark. We fear what we cannot see. It is for this reason that we start the evening service with the recitation of a verse from Psalm 78: “But he, the compassionate one, would expiate sin, and not destroy; he would again and again turn back his anger, and would not arouse his full wrath” (v. 38, trans.by Edward J. Greenstein). As the darkness of night envelops us, we affirm God’s nearness. God does not withdraw with the setting of the sun.

We intone Maariv [evening prayer service] only after the appearance of three stars. It begins with Barekhu, the call to praise God in a minyan [prayer quorum of 10]. Yet before that summons to prayer, we softly recite for ourselves vehu rahum . . . The verse is there to offset our anxiety with the onset of night. It avers the opposite of what we fear.

According to the midrash, the first time Adam experienced nightfall, he was overcome with dread. That first Shabbat of God’s newly created world had lasted 36 hours. As it ended, Adam feared that under cover of darkness his mortal enemy, the snake, would do him harm. To assuage his angst,God provided Adam with two flints from which he produced fire. During the Havdalah ceremony ending Shabbat we still recall that initial act of human creativity by saying a special blessing over fire praising God for enabling Adam to dissipate the darkness (Bereshit Rabba 11:2). Similarly, the ritual of starting Maariv with vehu rahum was inspired by the tinge of Adam’s primordial dread that assaults us nightly.

The ancient Egyptians called the experiential absence of divinity “darkness by day.” How much more frightening is the reversal of nature! They worshiped the sun not only as the source of their well-being but as the regenerator of creation on a daily basis. From the Middle Kingdom on the king was venerated as the son of Re, the living incarnation of the sun.”The mystery of solar rebirth is in fact the central, salvational element in Egyptian religion” (Jan Assmann, The Mind of Egypt, p. 209).

Hence, it is no accident that darkness unites the final three plagues that God hurls against Egypt. The locusts darken the face of the earth, if not the sky itself (Exodus 10:5, 15). The darkness that follows is so thick that one could touch it (Exodus 10:21-22). And the killing of the firstborn occurs in the depth of the night. Darkness forebodes devastation, even for the descendants of Jacob.

While the plague of darkness did no more than intimidate the Egyptians, underscoring the impotence of their supreme deity, it wreaked havoc on the Israelites. Rashi stresses that God used the three days of pitch black to eliminate all those Israelites who did not want to leave Egypt. True, Goshen where the Israelites resided was bathed in sunlight. But the darkness over the rest of Egypt concealed from the Egyptians all knowledge of their fate, thus denying the Egyptians any comfort (Rashi on 10:22).

Nor should we think the losses were light. On the contrary,Rashi tells us later that only one out of five Israelites left Egypt. The rest were not deemed worthy of redemption and perished unbeknown to their taskmasters (Rashi on 13:18).

Association with the Firstborn

Night is also associated with the slaying of the firstborn. Moses issues two commands to his people to avert tragedy: to cover the lintel and doorposts with the blood of the lamb and to stay indoors. In a memorable formulation, the Midrash posits the reason for the second: “Once permission has been granted to the destroyer to terrorize, it no longer distinguishes between the righteous and the wicked” (Mechilta d’Rabbi Yishmael, Horowitz-Rabin ed., p. 38).

The Torah substitutes the word”destroyer” twice for God’s name in reference to the 10th plague(Exodus 12:13, 23), as if to suggest that when God’s fury is fully unleashed all moral distinctions collapse. Destruction cuts a broad swath. In Egypt God struck when humans felt most vulnerable, in the middle of the night. Hence the instruction to the Israelites not to leave their dwellings on that fateful night. Outdoors the same end awaited all firstborn.

Interestingly, the verse with which we open the Ma’ariv service is taken from a dramatic retelling of the birth of ancient Israel. For the Psalmist, destiny came calling in a cascade of miracles that sprang Israel from slavery and sustained it through the wilderness and beyond. Yet time and again Israel repaid boundless grace with vile ingratitude and betrayal.Nevertheless as our verse makes clear, the covenant goes unruptured.

Compassion tempers wrath. God is willing to try again. The location of our verse near the middle of the psalm seems to imply that the historic relationship between God and Israel turns on unrequited loyalty and love. Divine compassion makes up for human frailty. By the same token, the Talmud observes that our verse (78:38) constitutes the epicenter in terms of verses of the entire Psalter, the quintessential biblical expression of an I-Thou relationship (BT Kiddushin 30a). Nothing but God’s infinite mercy can bridge the gap between our need and merit.

That faith in a compassionate Creator, I believe also helps to account for the unconventional fact that in Judaism the day as a unit of 24 hours begins with nightfall. It is at dawn that we are in our diurnal prime.Yet we greet the new day as our strength wanes because in the darkness we detect the light to come. With God by our side, we can defy the obvious and affirm the mystery that informs all existence. 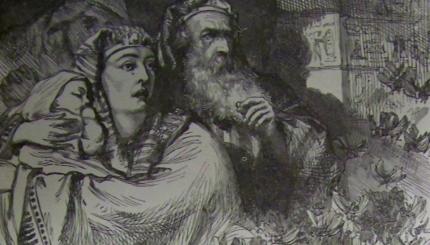