Have you ever wondered about the Jewish tradition that several major historical calamities occurred on a single day: Tisha B’Av, the fast still observed today on the ninth of the Hebrew month of Av? The Gemara on today’s daf sheds some light on the matter.

The rabbis are discussing a mishnah we read on Taanit 26, which lists five tragedies said to have taken place on the ninth of Av: (1) the decree that the generation of Israelites that wandered in the wilderness would not enter the land of Israel; (2) the destruction of the First Temple; (3) the destruction of the Second Temple; (4) the conquering of the Beitar fortress; and (5) the plowing under of Jerusalem by the Romans.

How do we know these five tragedies occurred on the Ninth of Av? On today’s page, we find just three words concerning tragedy #4, the conquering of Beitar:

Beitar (was) conquered. (How do we know that date is correct?) It is a tradition.

And what of the fifth tragedy, the plowing of Jerusalem? The Ein Yaakov, a medieval collection of non-legal material from the Talmud, says explicitly: “That the city was plowed under [on Tisha B’Av] is also a tradition.”

In other words, it may be more traditional than historical that the conquering of Beitar and the plowing of Jerusalem occurred on Tisha B’Av. A logical question follows: What is it about Tisha B’Av that motivated the rabbis to stack up tragedies on it? And what is it about these two final disasters that we consider them fundamentally tragic in the same way as the destruction of the Temple?

After the destruction of the Second Temple in 70 CE, ancient Israel was no longer under sovereign Jewish control, but a vassal of Rome. Rabbi Yochanan ben Zakkai had established the rabbinical academy of Yavneh, located about 60 kilometers from Jerusalem, as the new hub of Jewish learning. It seemed that the Jews were, if not content, at least resigned to subjugation by a foreign power.

But then Jews throughout the Roman world began to revolt. In Judea, the rebellion was led by a messianic figure named Bar Kochba. Bar Kochba, whose real name was Shimon bar Kosiba, took his nom de guerre from a verse in Numbers 24:17: “A star rises from Jacob, a scepter comes forth from Israel.” The Hebrew word kochav, meaning star, is the root of Bar Kochba’s moniker, and this phrase is understood to refer to the messiah.

Bar Kochba wasn’t an upstart. He was close with Rabbi Akiva, and all accounts point to Rabbi Akiva’s belief that Bar Kochba was indeed the messiah. So one can imagine the despair when the revolt collapsed spectacularly in the summer of 136 CE, with Beitar being its last holdout. Tens of thousands of people were massacred and ten of the leading rabbis — including Akiva — were martyred, an event we still recount as part of the Yom Kippur liturgy.

It’s unclear whether the ploughing of the Temple occurred prior to the Bar Kochba revolt — which would indicate it was one of its causes — or after, which would indicate it was a consequence. Either way, these events — the failure of the revolt, the extreme loss of life, the murder of rabbinic leaders and the plowing of the Temple to create a center of pagan worship — were every bit as calamitous as the destruction of the Temple itself, leading to 2,000 years of non-Jewish control over the land of Israel.

In the end, it makes sense that a rabbinic tradition arose to commemorate these last two events on the same day as the destruction of the First and Second Temple. After all, they effectively had the same outcome.

Read all of Taanit 29 on Sefaria.

This piece originally appeared in a My Jewish Learning Daf Yomi email newsletter sent on December 11th, 2021. If you are interested in receiving the newsletter, sign up here. 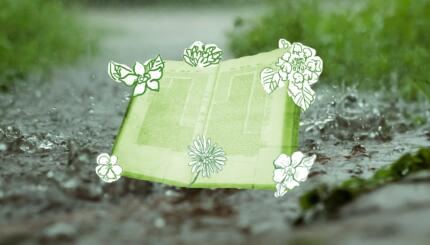 This talmudic tractate about fasting is packed with stories.