The English pediatrician and psychoanalyst Donald Winnicott spent much of his career examining the nature of beginnings. Expanding upon Freud’s theory (with perhaps a tad less cynicism), Winnicott believed that behind every delinquent, every dictator and every anxiety-plagued adult resides a child with a broken beginning. “Tell me what you fear,” he wrote, “and I will tell you what has happened to you.”

For Winnicott, beginnings don’t end. They remain dormant just beneath our consciousness, shaping the contours and textures of our later relationships. Addressing fellow practitioners in his aptly titled collection Home is Where We Start From, he writes:

I would like to feel that as a result of what I have to say, you may be able to see a little more clearly that in every case that comes your way there was a beginning and at the beginning there was an illness, and the boy or girl became a deprived child. In other words, there is a sense in what once happened, although by the time that each individual comes into your care the sense has usually become lost.

Our beginnings persist, informing every aspect of who we are. And yet they are often lost to us, faint and inaccessible. I am reminded of this any time I feel some measure of inadequacy. In my mind’s eye, it feels like I missed my childhood carpool. Beginnings don’t end. They endure.

The Passover seder is a celebration of the beginning of the Jewish people. Rabbi Judah Loew, also known by his acronym Maharal, asked why the Torah wasn’t given to the many worthy individuals we meet early on in the Torah narrative, prior to the Exodus from Egypt: the patriarchs and matriarchs, the twelve tribes, Moses and Aaron. His answer is that while individuals live and die, families are eternal. Only an eternal nation could perpetuate the eternal values of the Torah. And it was only after the Jewish people were reborn during the Exodus, transformed from a collective of individual Jews into the Jewish nation, that the world had a vessel capable of receiving the Torah.

And yet like Winnicott, Jewish tradition teaches that this beginning does not reside only in the past. That’s why, the Maharal explains, so many Jewish rituals are done in remembrance of leaving Egypt. It’s why, as the Talmud teaches, in every generation each person must view themselves as though they personally left Egypt. Our beginning as a people was not a discrete event that occurred once in a distant past, but something we relive each year.

The Passover seder is, in another important respect, about childhood. Children are the audience that shapes the entire seder.  It is the youngest child who traditionally asks the Four Questions. Several oddities are built into the seder experience just in the hope that a child notices and asks a question. Even the Hebrew word for Passover itself, pesach, can be translated as baby steps.

But it is not just the actual children that the seder hopes to engage, but also our inner children that Passover seeks to awaken. For one night, we remind ourselves that our childhood is not lost, but with enough careful prodding and attention it can reemerge.

Rabbi Abraham Isaac Kook makes much the same point when he writes:

Leaving Egypt was the type of event that only superficially to the untrained eye appears as something that happened one time in the past … but in truth, through internal recognition we arrive at the understanding that the very act of leaving Egypt was a feat that never ceased.

Therein lies the magic of Passover. When the beginning is not a buried relic of the past but ever-present, ever-unfolding, and ever-emerging, it becomes possible to reach just beneath the surface and begin again. Reliving our national birth each Passover is a reminder of how accessible our collective beginning can become.

To address the wounds of the present, we need to begin with those of our past. When the traumas of childhood, personal and collective, remain unaddressed and unhealed, they bubble up from time to time, impacting our lives in myriad ways. Passover forces us to confront the pain of our collective origin, which we incorporated into the Haggadah. As the Talmud advises in guiding our retelling of the Passover story: “Begin with the difficult times and end with the meritorious times.”

On Passover, we relive our collective childhood as a nation. And when we relive it, we can reshape it, reimagine it, and consider it anew.  We retell our founding story to remind us that the past persists and our collective beginning is never completely out of reach.

Passover enables us to squint just enough and rediscover our beginning, no matter how buried it has become. It reminds us that even an aged grandfather has a childhood just beneath the surface. And the very moment we learn of the possibility of re-encountering our beginning, we also discover how to recreate and reshape it. We learn to begin again.

This article initially appeared in My Jewish Learning’s Shabbat newsletter Recharge on April 9, 2022. To sign up to receive Recharge each week in your inbox, click here. 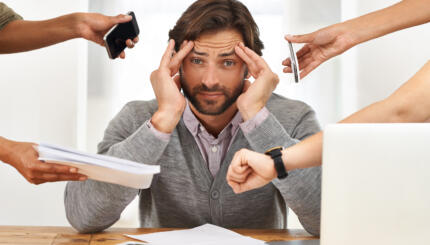 Too Busy for Redemption

Ironically, the festival of freedom is the holiday that requires the most preparation.