Americans don’t truly appreciate okra. It barely registers north of the Mason-Dixon line, and it’s eyed with suspicion even in the South, where it is regularly pickled, or deep-fried. But who can blame those who are wary of this green, pinky-shaped vegetable? It’s infamous for the slick ooze that comes seeping out of it when cooked. Advocates point out that okra slime actually helps thicken stews and clings to a cornmeal crust, but detractors have a hard time getting past the “yuck” factor. Believed to have originated in Africa (okra is a member of the mallow family–a cousin of cotton), okra is full of dietary fiber, protein, iron, calcium, and a slew of B vitamins.

Outside of America, okra reigns as a staple vegetable in much of the world’s hot-weather cuisine, from North Africa, to the Middle East and India; it also turns up in Italy, Spain, and parts of Central and South America. According to Gregory McNamee, author of Moveable Feasts: The History, Science, and Lore of Food, “[In these parts of the world], okra tends not to have the gummy, slimy, mucilaginous quality that makes it such an object of disdain among eaters tender of sensibility…a quality that results mostly from overcooking, the bane of asparagus, broccoli, and other such vegetables.”

Okra even turns up in Jewish cuisine, according to Jewish Food: The World at Table by Matthew Goodman: “In Libya…okra [or “Bamia” in Arabic] was considered a food of mourning, and was traditionally eaten, with onions and tomato sauce, before Tisha B’Av.” In addition to its symbolic resonance, this food choice also makes sense ecologically, as Tisha B’Av falls during the summer months when tomatoes and okra plants — both sun- and heat-craving vegetables — thrive.

The recipe below is an adaptation of Goodman’s Bamia recipe. If you live in the American South or near enough to it to score fresh heirloom okra from the farmers market, consider yourself among the lucky. Otherwise, head to the nearest Whole Foods or Middle Eastern market and stock up.

juice of one lemon

Heat olive oil over medium heat in a large sautee pan. Add okra, toss to coat, and cook for 3-5 minutes. Add chopped onion and garlic and cook for an additional 3 minutes, until onion starts to soften. Add tomatoes, tomato paste, lemon juice, sugar, and spices and simmer for 30 minutes, stirring occasionally. If mixture starts to look dry, add water a few tablespoons at a time. Serve hot over rice. 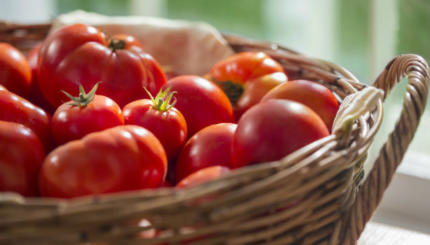 Whether you’re growing your own tomatoes in the backyard (like me!), getting barrels of tomatoes in a CSA, or just ... 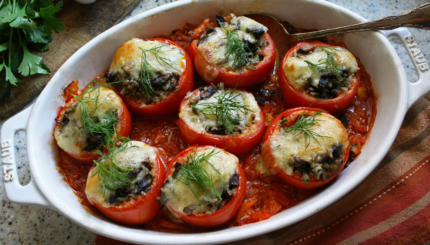