Today’s daf continues the discussion about what activities are permitted on the intermediary days of Passover and Sukkot — called hol hamoed — which are not as strict as first and final festival days but not like ordinary working days either. For example, one should not shave or cut one’s hair on hol hamoed. But the mishnah on the bottom of yesterday’s page allows for exceptions:

The following people may cut their hair on hol hamoed: someone recently arrived from overseas, or just freed from captivity or prison, one who had been ostracized by rabbinic decree and then released, someone who had taken a vow not to shave and the vow had been annulled, a Nazirite (who may not cut their hair) whose term had ended, and the leper who had come out of quarantine. Washing clothes was also forbidden except for those who had just come out of prison or captivity.

These are all people who, for one reason or another, are not able to cut their hair or shave just before the holiday. For them, we make an exception and permit a haircut on hol hamoed. But for people not in these extraordinary circumstances, the rules are different, as the Gemara explains:

Here, too (ordinary people are forbidden to cut their hair on hol hamoed) in order that they not enter the festival untidy.

The prohibition on a haircut during the festival encourages people to enter the sacred week looking and feeling their best.

Back to those who are not able to freshen up ahead of the festival: Some of these categories are no longer relevant, such as the leper and the person ostracized by rabbinic decree. The Hebrew term for ostracism, niddui, refers to a form of communal punishment applied during the talmudic era mainly to rabbis who refused to accept a majority decision on matters of Jewish law. Perhaps the most famous example of this is the ostracism of Rabbi Eliezer in the iconic story of the Oven of Akhnai, which we will encounter in just over two years’ time on Bava Metzia 59b.

Scholars who were ostracized were sent out of the community, usually for 30 days, until such times as they relented. If they died in exile, they were buried with a stone to symbolize divine punishment.

A related but much more severe mechanism, which remains in force even today is called herem, the ban. This is a total and permanent shunning, much more severe than niddui. The original biblical usage of heremwas the ban on using holy things for mundane purposes or forbidding specific property to be used as in the case of Achan (Joshua 7:13). It was also sometimes applied to enemies who were to be extinguished, and so in the biblical context can also mean “destroy.” (e.g. Deuteronomy 13:16)

By talmudic times, herem was used as a means of imposing communal standards in places where Jewish communities were limited in other punitive measures and where local authorities would undermine the standards of the community. It continued to be a favorite form of communal punishment throughout the medieval and the early modern period.

The most famous post-talmudic ban was that of the 17th century philosopher Baruch Spinoza, born in Amsterdam. Because he refused to accept the authority of the community and challenged traditional beliefs in a providential divine being and the divine origin of the commandments, they excommunicated him in 1656. Though he is long dead, the memory of the ban is still very much alive.

There are a few famous examples of excommunication in the modern period. In 1918, the Rabbinical Council of Odessa excommunicated Leon Trotsky for his anti-religious socialist ideas. In 1945, the Orthodox rabbinate in the United States excommunicated Rabbi Mordecai Kaplan, the founder of Reconstructionism, because he published a prayer book that altered traditional liturgy. And in Israel, a herem, more symbolic than effective, was imposed by the Chief Rabbinate on the Neturei Karta — the small, extreme, ultra-orthodox and anti-Zionist movement which is committed to anti-Israel activism — after its leaders participated in a 2006 Holocaust denial conference in Iran.

But returning to the subject of hol hamoed, the Jewish community is still divided on the nuances of observing intermediate festival days. For example, there is a contemporary debate about whether one lays tefillin on the intermediate days of the festival, which generally distinguishes Hasidim (who largely do) and most Sephardim (who do not), and Lithuanian or Yeshivish Jews (who do). And even these groups are divided between those who make a blessing and those who do not. Such are nuances of Jewish religious life.

Read all of Moed Katan 14 on Sefaria.

This piece originally appeared in a My Jewish Learning Daf Yomi email newsletter sent on January 26th, 2022. If you are interested in receiving the newsletter, sign up here. 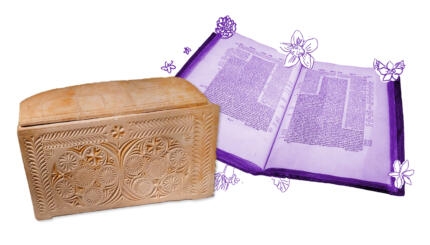 Don’t do it, unless you must.

For personal use only.