The word midrash refers to “searching out” the meaning of, or interpreting, the words of the Torah. Midrash tells new stories, answers new questions and forges connections between new Jewish realities and the eternal, unchanging biblical text.

When this searching centers on ideas, values, or the story and characters of the Torah, it is known as midrash aggadah.  When the focus is on Jewish law and practices, it is called midrash halakhah.  The latter term is also used to refer to a set of works from the talmudic period that are largely made up of legal interpretations of the books of Exodus, Leviticus, Numbers, and Deuteronomy.

The text of the Torah is often general or ambiguous even when presenting laws.  Midrash halakhah attempts to clarify, specify, or extend a law beyond its obvious reference points.

These words that I command you today shall be on your heart.  You shall teach them repeatedly to your children, and speak of them when you sit in your home, when you go on your way, when you lie down and when you get up.  You shall bind them for a sign on your hand and they shall be frontlets between your eyes; you shall write them on the doorposts of your house on your [city] gates.

“These words” could refer to the verses at hand, the longer speech Moses is giving, or even the whole of Torah. The ancient rabbis interpreted the phrase as referring to verses from this and two other biblical chapters that have come to be known as the prayer Shema. They debated whether “when you lie down and when you get up” refers to the physical position one should be in to say Shema, or the specific times of day for its recitation (evening and morning). They derived other practices–the tefillin boxes worn on the arm and forehead, the mezuzah container affixed to doorposts throughout a home, each containing the words of the Shema — from the same Deuteronomy passage.

The destruction of the Jerusalem Temple in 70 C.E. eliminated Judaism’s national religious center. Long sections of Exodus, Leviticus and Numbers, describing the priestly system and its requirements were now inoperative, and in danger of being irrelevant.  Midrash halacha enabled the rabbis to fashion new practices to replace sacrificial worship and to connect those practices to the words of the Torah.

Jews came to encounter many of the Torah’s passages regarding law and practice in light of halachic midrashim. It is almost impossible to read Deuteronomy today and not think of the Shema and the mezuzah.

The two centuries after the destruction of the Temple were the heyday of midrash halacha. As noted above, midrash halacha from this period was collected in three books — the Mekhilta on Exodus, the Sifra on Leviticus, the Sifrei on Numbers and Deuteronomy — known as the tannaitic midrashim. (The tannaim were the rabbis from the time of the Mishnah, the legal code edited around the year 200.)

While the Sifra and the Sifrei are almost entirely works of halacha, all three tannaitic midrashim contain aggadic midrash as well. They present many of the same laws found in the Mishnah, in order of their connection to the Torah text (in contrast with the Mishnah, which is organized by topic and contains relatively few quotations from the Torah).

The Schools of Rabbi Yishmael and Rabbi Akiva

Two styles or schools of midrash halakhah were associated with particular sages. The dictum “The Torah speaks in the language of human beings” is attributed to Rabbi Yishmael; that is, that Torah’s use of language reflects the way that people customarily converse. Consequently, when a sage is interpreting a verse or deriving a practice, he should assume that the text is making use of human conventions (such as digressions, repetitions, etc.) rather than assigning significance to each textual quirk. Thirteen interpretive principles were attributed to Rabbi Yishmael, such as noting when a general law and a particular specific application are both supplied in the Torah.

Rabbi Akiva, by contrast, held that the Torah’s language was divine in character, and thus no letter or word in the Torah could be dismissed as a mere redundancy or convention. Even the smallest element of the text, such as the particle et (which in ordinary language is merely a frequent grammatical indicator), had its own unique, even mystical, significance.  What Rabbi Ishmael might interpret as simply a feature of human language, Akiba would view as having deliberate significance and meaning. In one talmudic story, Moses himself is shown in Akiba’s classroom, where Akiba links particular laws to calligraphic flourishes on the letters in the Torah scroll, and attributes the laws to traditions received from Moses at Sinai. 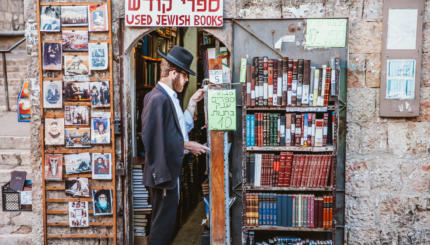 A compilation of aggadic (narrative) and halachic (legal) midrash