Words matter. Yet we are taught exactly the opposite for our entire lives.

As children, we intone, “Sticks and stones may break my bones, but words will never hurt me.”

As adults, we’re urged to “get it in writing.” A verbal contract or agreement is meaningless without having it appear in black and white, finalized with our signature.

But Kol Nidrei — the service recited at the outset of Yom Kippur and which is arguably the most recognizable piece of Jewish liturgy — teaches us that words alone carry an awesome power. This most sacred, powerful, and iconic service of the Jewish year revolves around nothing less than the sheer majesty of the spoken word.

In front of the entire congregation, the cantor chants:

All vows we are likely to make, all oaths and pledges we are likely to take between this Yom Kippur and the next Yom Kippur, we publicly renounce. Let them all be relinquished and abandoned, null and void, neither firm nor established. Let our vows, pledges, and oaths be considered neither vows nor pledges nor oaths.

In fact, the Kol Nidrei prayer is not a prayer at all. Rather, it’s a somewhat dry legal formula. Two witnesses, holding Torah scrolls to insert an additional measure of gravitas, stand on either side of the cantor as he chants the text three times. The words of Kol Nidrei are not even Hebrew, but Aramaic, which was the vernacular in ancient times. Hebrew would be reserved only for holy texts and prayers, not a legal proceeding.

And because we would never engage in any business or legal dealings during a Jewish holiday, Kol Nidrei must be recited before Yom Kippur actually begins, in advance of sunset. This is why the Yom Kippur fast lasts closer to 25 hours or even longer. We’re already sitting in synagogue listening to Kol Nidrei before the holiday technically begins.

Why do we use this rather bland and uninspiring public declaration to usher in the most sacred day of the year? One might think that we should proclaim our collective commitment to engage in the act of teshuvah (repentance). Perhaps we should seek to have our past transgressions forgiven and ensure that our names be entered into the Book of Life.

The truth is seemingly more prosaic: We state in advance that we should not be held accountable for any vows we might take between now and next Yom Kippur. This probably doesn’t resonate with the modern mind so much, but vows used to be serious business. A vow was much more than simply a promise someone made to another person; it was a sacrosanct commitment that could not be broken.

The Torah outlines in great detail who could make and be held accountable for vows. Much like today’s rules regarding signing a contract, minors (and often women) could not enter into a vow.

In the Book of Jonah (traditionally read on the afternoon of Yom Kippur), after the non-Hebrew sailors throw Jonah overboard and witness the power of God, we read that they “feared God and made vows.”

Nazarites took vows to live a life of holiness, with added restrictions such as the prohibition against drinking any wine.

And even in recent history, it might be common for a person who finds himself in great peril to state, “God, if I survive this situation, I hereby vow to commit myself to a life of strict observance!”

But human nature being what it is, how many vows are actually kept?

The Kol Nidrei service provides a way to let us off the hook. At the precise time when we’re seeking to start anew and wipe the slate clean, we try to stack the deck in our favor for the coming year by annulling any careless promises in advance.

But the message of Kol Nidrei carries a deeper meaning: What we say can be just as consequential as what we do. If we’re truly seeking to change our behavior for the coming year, to become closer to God and to our community, we must begin with how we speak and relate to each other.

Do we engage in lashon hara, speaking of others in a derogatory way?

Do we needlessly intensify discussions with inflammatory comments?

Or do we take the opportunity to express our devotion and commitment to our family?

During the morning liturgy on Rosh Hashanah and Yom Kippur, we read, “The great shofar is sounded, but a still, small voice is heard.”

Kol Nidrei teaches us that the mere spoken word — our own still, small voice — can be an enormous catalyst for how we choose to live.

Cantor Matt Axelrod has served Congregation Beth Israel of Scotch Plains, New Jersey, since 1990. He is a graduate of the Jewish Theological Seminary of America and a national officer of the Cantors Assembly. Cantor Axelrod is the author of Surviving Your Bar/Bat Mitzvah: The Ultimate Insider’s Guide, and Your Guide to the Jewish Holidays: From Shofar to Seder. You can read his blog at mattaxelrod.com. 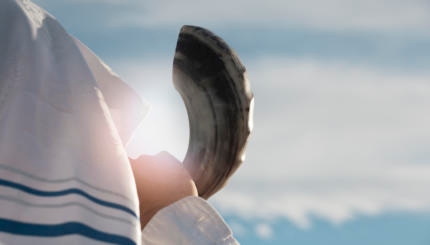