Jewish Renewal is a Jewish religious movement that combines a heavy emphasis on spiritual practices, particularly those drawn from Hasidic Judaism, with socially progressive values like gender egalitarianism and environmental awareness. Its practices draw from Jewish mysticism and Hasidic thought, recast in contemporary progressive terms and deeply influenced by the 1960s counterculture. Jewish Renewal has been described as a marriage of Hasidism with a New Age ethos.

The movement is small by the standards of traditional Jewish denominations, encompassing only about 50 affiliated communities, most of them in the United States. The number of Jews who identify with Renewal is small enough that the 2013 Pew Survey of American Jews lumped it in with other small movements (like Reconstructionism) with which about 6 percent of American Jews in total identify. And like Reconstructionism, Jewish Renewal prides itself on having pioneered innovations that have since found wide purchase in the larger Jewish community.

Though it has many of the trappings of a conventional Jewish denomination — including a rabbinical and cantorial training program, clergy association, synagogue network and regular conventions — Renewal describes itself as an attitude, not a denomination. Among other things, communities emphasize both joyful prayer and periods of quiet contemplation, a liberal approach to Jewish law, a strong connection between Jewish practice and the natural world, and an openness to borrowing from other spiritual traditions. The movement is uniformly egalitarian and welcoming of LGBTQ Jews and interfaith families.

The movement grew out of the work of Rabbi Zalman Schachter-Shalomi, a visionary spiritual leader and author renowned for his deep Jewish learning and extensive familiarity with the spiritual traditions of other faiths, as well as his penchant for creative experimentation. Born in Europe to an Orthodox family with Hasidic roots, Schachter-Shalomi began his career as a Chabad rabbi but ultimately ventured far beyond its boundaries, immersing himself deeply in the cultural movements of the 1960s and famously trying LSD with Timothy Leary (and reporting back to his colleagues on its spiritual potential). He finished his career in Boulder, Colorado, as the holder of the World Wisdom Chair at the Buddhist university Naropa.

Schachter-Shalomi believed that various 20th century civilizational developments — Auschwitz, Hiroshima and the 1969 moonwalk were frequently cited examples — were so destabilizing they rendered traditional Jewish modes of thought and practice irrelevant. Judaism, he argued, had to be “renewed,” harmonized with emerging ways of understanding the world. “It can’t be the same Judaism as it was before,” Schachter-Shalomi said. “It has to come to terms with the emerging time.”

Schachter-Shalomi drew on the Hasidic and mystical tradition in seeking the sort of renewal of Jewish life he found urgently necessary, but he also pushed for some significant departures from past Jewish thought and practice. He urged Jews to get over their “triumphalist” view that they alone are the bearers of spiritual truth and built close relationships with leaders of other faith communities, even borrowing some of their “spiritual technologies.” He reimagined a host of Jewish traditions to be mindful of emerging understandings around environmentalism and feminism. And he and his followers introduced various innovations — often imported from other traditions — that have since become common in the Jewish world, particularly the incorporation of Eastern practices like yoga, chanting and meditation.

In the late 1970s, Schachter-Shalomi founded a synagogue in Philadelphia, B’nai Or (“Sons of Light”). Its name has since changed to the more gender-neutral P’nai Or (“Faces of Light”). A number of Renewal communities today use variations on that name. In the 1990s, the movement merged with the Shalom Center, a liberal advocacy outfit helmed by Rabbi Arthur Waskow, reflecting the twin poles around which much of the Renewal movement orbits — the work of inner repair of the heart and the outer work of social and political change. The groups later parted ways.

Renewal’s statement of principles, adopted in the 1990s, reflects the movement’s commitment to personal spiritual growth as well as its attempt to harmonize ancient Jewish teachings with contemporary values. “We will study, teach, and make accessible [sacred Jewish] texts and writings with all those who wish to encounter them, wrestle with their content and meaning, and decide what to draw on and what to leave behind,” reads one. Other principles commit Renewal to gender egalitarianism, LGBTQ equality, Israeli-Palestinian peace and racial reconciliation.

Renewal is far more decentralized than the traditional denominations. Its principal organization, ALEPH: The Alliance for Jewish Renewal, is based in Philadelphia. But its ordination program has no physical location, relying instead on various forms of distance learning punctuated by regular in-person gatherings. It also lacks the large summer camp and synagogue support networks underwritten by the larger denominations.

Schachter-Shalomi’s death in 2014 was a watershed for Renewal. Though he had relinquished the day-to-day leadership of the movement some years before, his influence among Renewal followers remains unequaled and his teachings remain a mainstay of the religious life of Renewal communities as well as its clergy training programs. 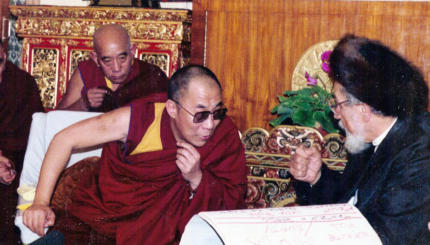 Most traditional authorities dismissed Hinduism as idolatry, but in recent years, some Jews have become more tolerant of certain Eastern religions and practices.