The overarching Jewish attitude toward the poor is best summed up by a single word of the biblical text: achikha (your brother). With this word, the Torah insists on the dignity of the poor, and it commands us to resist any temptation to view the poor as somehow different from ourselves.

The concept of human dignity is well-ingrained in Judaism. The book of Genesis describes human beings as created “b’tzelem elokim” in the image of God (1:26). At least one early Rabbi considers one of the verses expressing this idea to be the most important verse in the Torah (Sifra K’dosbim 2:4). The insistence that human beings are creations in the divine image implies that any insult to an individual, by extension, is an affront to God. In reminding us that the poor person is our sibling, the Torah emphasizes that, like us, this person is a manifestation of the divine image and should be treated as such.

In addition to challenging us to see the poor person as a member of our family, the word achikha also disabuses us of any pretense that we are somehow inherently different from the poor. Those of us who do not live in dire poverty often protect ourselves from any sense of vulnerability by finding ways to differentiate ourselves from the poor: they must be poor because they don’t work hard, because they drink or take drugs, because they come from dysfunctional families, and so forth. Seeing each poor person as our sibling cuts through any attempts to separate ourselves from him or her.

In a riff on the Deuteronomy 15 passage, Don Isaac Abravanel, a 15th-century Spanish commentator, identifies three primary reasons for giving tzedakah: to express mercy on the poor; to recognize the poor person as your relative; and to commit to sustaining your community. With this list, Abravanel proposes a three-pronged approach to interacting with the poor.

First, you may care for the poor out of pity. The word “mercy” suggests a stance toward the poor in which you give out of a sense of generosity, and not out of a belief that the poor person deserves the gift. Similarly, when Jews pray for divine mercy, the liturgy reflects the hope that God will have mercy even though we have done nothing to deserve God’s beneficence. In the words of the High Holiday liturgy, “Avinu Malkenu (our father, our king), have mercy on us and answer us, even though we have done no good deeds.”

Second, Abravanel asks us to recognize the poor as members of our own family, insofar as all people are descendants of a common ancestor. Like the concept of achikha, this demand forces us to seeeach poor person as an individual human being worthy of dignity and respect. Rather than view a poor person as an anonymous and undeserving beggar, we are asked to regard this person as a child of “Abraham, Isaac, and Jacob.” As such, this person, though imperfect, is deserving of what the talmudic Rabbis call z’chut avot (the merit of the ancestors), the ancestral connection that guarantees God’s mercy.

With the reference to Abraham, Isaac, and Jacob, Abravanel seems to be speaking primarily of responsibility to the Jewish community; we can, however, expand his words to include all descendents of these three forefathers–this would certainly include all Christians and Muslims, but we might more generally say that we cannot be sure anymore who is descended from Abraham, Isaac, and Jacob, and thus should extend the definition of achikha to all of humanity.

Third, in Abravanel’s formulation, we should consider the care of the poor as a means of building the community as a whole. In the most utilitarian formulation of this idea, we might say that contributing to the education of the poor helps to guarantee a better educated and therefore more productive society; that helping the poor to buy property increases the number of homeowners in a given place and therefore raises the value of all housing stock; or that job training and small business loans for the poor increase the economic viability of an entire community.

A rabbinic story tells about a group of people traveling in a boat. One passenger takes out a drill and begins drilling a hole under his seat. The other passengers, quite understandably, complain that this action may cause the boat to sink. “Why should this bother you?” this man responds, I am only drilling under my own seat.” The others retort, “But the water will rise up and flood the ship for all of us!” (Vayikra Rabbah 4:6). The moral of this story is clear: one person’s destructive action may literally drown the entire community. But we might add that the inverse is also true: a single positive change may transform an entire community. Thus, the alleviation of poverty, even in the smallest detail, may help the community as a whole to flourish.

Rather than consider the poor person a drain on our resources, we may regard a gift to this person as an investment in the future of the community. With monetary assistance, today’s beggar may be tomorrow’s community leader and himself or herself a giver of tzedakah.

The Paradox of Poverty

A striking feature of the Deuteronomy passage is the apparent contradiction between verse four, “There shall be no needy among you,” and verse eleven, “For the poor will never cease from the land.” We expect the omnipotent God of the Torah to keep promises; we are therefore surprised to hear the Torah promise to eradicate poverty and then, almost in the same breath, admit that this promise will never be fulfilled.

Noting the conditional nature of the promise to eradicate poverty “if you diligently listen to the voice of Adonai your God,” most traditional commentators understand the passage as a prediction that the Jewish people will never fully obey the commandments.

While holding out a utopian promise of the reward for full allegiance to the mitzvot (commandments), God, according to these commentators, simultaneously prepares for the inevitability of the people’s disobedience.

If we accept that God’s promise in this passage relies on a condition that humans can never meet, we encounter at least two problems. First, such an interpretation contradicts a basic principle of rabbinic exegesis–the idea that every word of the Torah has a purpose.

Second, this suggestion raises an even more fundamental theological problem. If human beings are to hold ourselves responsible for observing the commandments of the Torah, we need to believe that God, at least, believes that we are capable of following these commandments. It would seem a betrayal of trust for the Torah to set out expectations that God already knows we will not fulfill.

Many commentators thus seek an alternative resolution of the apparent contradiction between the assurance that “there shall be no needy among you” and the warning that “the poor will never cease from your land.” Rabbi Moshe ben Nachman (Ramban) writes:

“For the poor will never cease from the land” [means] it is impossible that the poor will permanently disappear. [Moses] mentions this because, having assured them that there would be no needy if they observed all of the commandments, he goes on to say, “I know that not every generation, forever, will observe all of the commandments to the point that there is no longer any need for commandments concerning the poor. For perhaps, at certain times, there will be needy, and therefore, I am commanding you for the case in which they are present. And the text says, “in your land,” to refer to the entire area of habitation, for the promise that there will not be poor among you applies “in the land which God is giving you as an inheritance,” as long as you fulfill all of the commandments there; then, it says that it is possible that, in some period or place in which you have settled, there may be a poor person among you. For the meaning of “in your land” refers to all of your settlements–in the land of Israel and outside of the land of Israel. And the meaning of “the poor person in your land” is that this phrase refers both to your brethren and to all of the poor of your land. (Ramban’s commentary to Deut. 15)

With this explanation, Ramban portrays the biblical text as optimistic but realistic. According to his reading of this passage, the Jewish people will generally observe the commandments, but will not always do so perfectly. Even if one generation succeeds in temporarily eradicating poverty, the possibility remains that poverty will resurface in another generation. Thus, the Torah anticipates a perfected world, but it plans for an imperfect one.

What is the Best Approach?

A common debate among those involved in antipoverty work concerns the relative value of direct service addressing immediate needs and of advocacy or organizing addressing the need for systemic change. Advocates for direct service argue that the hungry need to be led today and that the homeless need somewhere to sleep tonight. Those who prefer organizing or advocacy point out that soup kitchens and shelters will never make hunger and homelessness disappear, whereas structural change might wipe out these problems.

The Deuteronomic response to this debate is a refusal to take sides, or better, an insistence on both. Rather than advocate exclusively either for long-term systemic change or for short-term response to need, this passage articulates a vision that balances the pursuit of full economic justice with attention to immediate concerns. In this reading, the text in question becomes a charge to work for the structural changes that will eventually bring about the end of poverty while also meeting the pressing needs of those around us.

Reprinted with permission from There Shall Be No Needy, published by Jewish Lights Publishing. 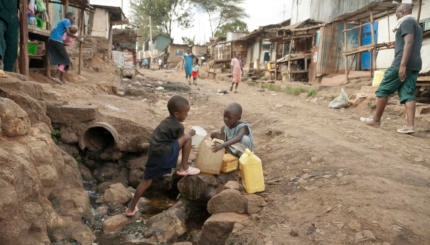 It would be wise to consider sound anti-poverty programs that tackle the general problem of lack of ownership.

Tzedakah in the Bible