The views and opinions expressed in this article are those of the author and do not necessarily reflect the views of My Jewish Learning or its parent company, 70 Faces Media.

Deadly Arab riots have broken out in many of Israel’s mixed cities over the past week, giving expression to decades of pent-up rage over government neglect, repression, and discrimination. In their wake came demonstrations, disturbances, and riots in much of Area C of the West Bank, where Palestinians have been living under the yoke of Israeli military rule for over 50 years. One of the sparks that ignited the tinderbox was the extended, massive Israeli missile and artillery attack on Gaza, in which hundreds of Palestinian men, women, and children were wounded or made homeless and many were killed.

Israel’s campaign against Gaza came in response to the hundreds of rockets that Hamas indiscriminately rained upon Israel, sowing fear and panic and causing widespread disruption, as well as the destruction of property and loss of life. Indignant and angry, Israel felt compelled to defend itself and not let such an attack go unanswered.

Hamas’s rockets were both part of an ongoing war against Israel and a reaction to two ‘Zionist provocations in Jerusalem.’  In the wake of the Six-Day War in 1967 in which Israel captured East Jerusalem, the Israeli Knesset passed a law allowing Jewish organizations to reclaim the land they had owned in East Jerusalem that was lost when Jordan conquered and occupied it in 1948. As a result, a growing number of Palestinians have been losing the dwellings in which they and their families have been living since Jordan resettled them in 1948. The Palestinian neighborhood of Silwan is now dotted by enclaves of religious-nationalist Jewish settlers. One such case pertaining to a number of Palestinian families in the Sheikh Jarrah neighborhood has been winding its way through Israeli courts for a decade, and a final eviction order – pending the intervention of the Israeli Supreme Court – was just recently issued. To make matters worse, unlike Jews, Palestinians who owned land and fled during the 1948 war are legally barred from reclaiming their lost property.

The second cause of Hamas’s indignant rage was the so-called Israeli attack on the Al Aqsa mosque in Jerusalem, the third holiest site in Islam. Israeli riot police, trying to nip incipient violence in the bud and to protect Jewish worshippers down below at the Western Wall, entered the mosque with a heavy hand and the result was bedlam.

And all this began when the holiest time of the year for Muslims, the end of the month of Ramadan, coincided with Jerusalem Day, on which religious Jewish nationalists celebrate the conquest of East Jerusalem in the Six-Day War as part of an ongoing Biblical redemption and proclaim their exclusivist vision of a Jewish Jerusalem.

This terrible string of events over the past week and a half lays bare six fundamental inter-related insights that we ignore at our own peril:

1 The Palestinians living in the land between the Jordan River and the Mediterranean Sea make up one unit. The Green Line separating Israel from the Palestinian Territories/Judea and Samaria has, of course, far-ranging political significance but otherwise, it is meaningless. It marks the 1949 armistice line but carries no deeper meaning and makes no cultural or ethnic sense. What happens in Jerusalem reverberates in the hearts of Palestinians in Gaza and vice versa.

There are two prongs to this argument. First, although on the one hand, Palestinian identity is extremely fragmented, Palestinians are united by a deep sense of shared connection to Al Quds/Jerusalem.  On a very fundamental, visceral level, no matter where they live between the River and the Sea, they all see themselves as guardians of the Al Aqsa mosque.

Second, the Palestinians throughout this land are the same clans and families. Jerusalemites have relatives in Gaza whom they love and with whom they identify. The vast majority of today’s residents of Gaza are not from there, but are refugees and descendants of refugees from the center and south of what is today Israel. They see themselves as displaced people and they want to go home. The fortified border separating Israel from Gaza is for them an immoral barrier preventing them from returning to their ancestral lands.

2 The conflict in this land is also a conflict over identity in which religion, and religious culture and values, play a major role. It is not merely about borders, security, freedom or human rights.

For approximately one hundred years now, Palestinians have been rallying around the call that “Al Aqsa is in danger.” They perceive Zionism as a reiteration of the Crusades of the Middle Ages in which the Christians wrested control of the Al Aqsa mosque from Muslim hands. That historical trauma is being relived in our generation.  Justifiably or not, they perceive the Jewish focus on the Temple Mount and the Holy Temple as an existential threat to their religious identity and honor.

This conflict cannot be solved solely on the playing field of politics. Interfaith dialogue, theological introspection and re-evaluation, and religious (re)education led by religious leaders will have to play a major role.

3 The conflict cannot be understood without including the lens of the Nakba. Palestinians see themselves as experiencing an ongoing Nakba. For them, 1948 was a catastrophe of holocaust proportions that decimated their people physically and culturally. Not only are they still living the trauma, but they experience the wounds as being continually re-inflicted in every action of the Israeli army in the West Bank and every court-ordered eviction in Jerusalem. (And even perhaps in every confrontation between young Palestinians and the Israeli Police in Lod or Ramle.) For them, the war of 1948 is still going on. The Palestinians of Gaza still want to go home and the rockets of Hamas are meant to restore Palestinian dignity lost throughout the land 73 years ago.

4 The vast majority of Palestinians and Israelis live in two different realities and neither side understands the other. We each live in a bubble of our own side’s narrative and are oblivious to how the other side perceives itself, ourselves, and our side’s actions. The two narratives stand in stark opposition, and yet both reflect the authentic lived experience of those who hold to them.  Neither narrative is a complete delusion. Each narrative on its own is true, but only partially so. The larger truth is built from the juxtaposition of the two.

5 No long-range good is achieved by violence in the conflict with Gaza. We need mutual recognition and historic reconciliation. We have already been through Operation Summer Rains, Operation Autumn Clouds, the First Gaza War, Operation Hot Winter, Operation Cast Lead, Operation Returning Echo, Operation Pillar of Defense, and Operation Protective Edge, not to mention numerous smaller skirmishes. Hamas wants to assert its strength, teach Israel a painful lesson, and/or avenge the killing of Palestinian fighters or civilians. Israel aims to teach Hamas a painful lesson, cow Hamas into submission and/or achieve deterrence and calm.  At the end of each episode, we are back where we started from, except that tens, hundreds, or thousands are dead or wounded, displaced, traumatized, and impoverished. Palestinians and Israelis are further embittered, convinced by their first-hand experience that there is no partner on the other side, rather just an evil devil that can never be trusted and only understands the language of force.

Those with any long term memory know this to be true, but we continue lashing out, propelled forward by our irrational animal instincts or convinced that there is no hope for any long term solution and that the best we can do is the short term calm – until the next round – that overwhelming force can sometimes achieve.

Time is long overdue for a complete overhaul of our attitude and our approach. See below.

6 Coexistence is not enough. We need mutual recognition and historic reconciliation.  Cordiality, respect, cooperation, economic partnerships, and general good-neighborliness between Jews and Palestinians in Israel’s mixed cities – as well as throughout the land, including the West Bank/Judea and Samaria – is very important, but it cannot end there. Such coexistence is fragile and unstable because it is only surface-deep. It usually leaves in place all the misunderstandings, prejudices, fears, and traumas of this conflict, which we often don’t even know that we harbor. When a match is lit, it all explodes and we bemoan the fact that we ever trusted our neighbors and co-workers.

Historic reconciliation is the order of the day throughout the land, including Gaza.

Reconciliation means opening old wounds and confronting them. It means deep listening while withholding judgment, listening to narratives that are like a dagger to the heart. It means learning to recognize the presence and the identity of the other and honoring perspectives, truths, and experiences that are not ours, and even developing empathy for them and for those who hold them. It also entails painful introspection and the willingness to admit that our side has made mistakes and even engaged in destructive behavior. It goes so far as reinterpreting religious texts and embarking upon a major overhaul of our self-understanding. Forgiveness is also part of the process.

Through reconciliation, we move from a place of us vs. them, good vs. evil, to a more nuanced intuition that there has been good and bad on both sides. We extricate ourselves from a zero-sum game to an understanding that we must all see ourselves as being on the same side. If one loses, we all lose, and if one gains, we all gain – win-win.

Reconciliation must be part of a larger process of painful political negotiations that will significantly refigure the social and political infrastructure of our lives and societies. It will be an excruciatingly difficult, drawn-out process that will require tremendous resources – material, emotional and spiritual. But it is our only hope. The only thing on earth more difficult is the status quo.

An overview of Israel's relationship to the Sinai, the Gaza Strip, Jerusalem, the West Bank, and the Golan Heights, 1987 - 1998. 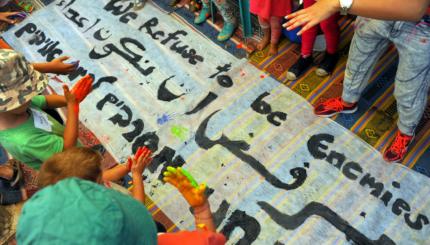 Jon Stewart Can’t Talk About Israel, But We Must

Jon Stewart, in his July 21 episode of The Daily Show, viscerally demonstrated what many of us, I am sure, ...