Kosher foods are those that conform to Jewish dietary laws as given in the Torah and expanded by the rabbis. People who keep kosher do not eat certain animal species including pigs, birds of prey, and crustaceans. They also do not eat the blood of any animals, nor do they consume animals that have not been slaughtered in an approved manner. And people who keep kosher also do not mix dairy and meat products in single meal, instead waiting a set amount of time between these two categories of food.

In modern times, when many foods are processed in factories, some food manufacturers affix labels to their foods to indicate that they are kosher. Kosher certification confirms that a leg of chicken comes from an animal that has been slaughtered in a kosher manner, or that a can of soup has been prepared in a facility that ensured non-kosher ingredients did not come into contact with the contents of the can.

The laws of keeping kosher are ancient, and many have sought an explanation for their origin — especially the Jewish taboo against eating pig — in the idea that this diet conveys health benefits. The idea is that pig meat was more likely to be diseased and avoiding it was a way to remain healthier. Though there may be some truth to this explanation, it doesn’t provide a strong explanation for all of the Jewish dietary regulations.

Is a Kosher Diet Healthier Than Other Diets?

Today, while many Jews keep kosher for religious reasons, some people (Jews and non-Jews) prefer kosher food because they believe it to be healthier. For one, they know that processed kosher foods are more closely supervised than other foods. And fresh foods, like salad greens, are carefully inspected for insects.

But while many, though not all dietitians might agree that not eating pig meat — or at least not consuming it in large quantities — is in fact beneficial to one’s health, there is little reason to think that a kosher diet is inherently healthier than any other. Just as a vegan diet composed entirely of beer and french fries is unlikely to improve one’s health, a kosher diet that is loaded with processed meats and soda (read the interesting history of how Coca Cola became kosher!) is not likely to convey health benefits. Indeed, many of the traditional Ashkenazi foods that are thought of as quintessential “Jewish food” are not considered the most healthy foods around. (Traditional Sephardic cuisine may in fact be much better for you.) There is also a concern that to avoid bug contamination in produce, kosher vegetables are sprayed with extra pesticides that are not great for human health.

Although there is wide disagreement about what constitutes a healthy diet, one can pursue almost any diet (vegan, vegetarian, whole foods, paleo, keto, Mediterranean, etc.) while keeping kosher. As a bonus, raw vegetables and fruits are inherently kosher! So eat your veggies.

Sign up for a journey All About Keeping Kosher:  Explore what it means to keep kosher. This email series will teach you everything from the basics to how to set up a kosher kitchen. 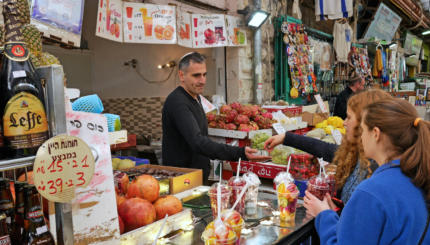