As in the Diaspora, Hanukkah in Israel is a major event, with families gathering to light the menorah and feast on fried foods. But Israel does have a number of unique Hanukkah traditions that set it apart from the rest of the Jewish world.

The most concrete difference between Israeli and Diaspora holiday celebrations is found on the dreidel, the spinning top at the center of this classic holiday game. Outside of Israel, the four-sided top is marked with four Hebrew letters: nun, gimmel, hey, shin, which stand for the Hebrew phrase nes gadol haya sham (“a great miracle happened there”). In Israel, where the Hanukkah miracle took place, the final letter on the dreidel is pey instead of shin, for nes gadol haya po (“a great miracle happened here.”)

On Hanukkah, it’s customary to eat fried foods in commemoration of the holiday miracle, in which a jar of oil sufficient to burn for one day wound up burning for eight in the ancient Temple. In most of the world, latkes are the fried food of choice. But Israelis go for sufganiyot, or donuts. The classic version is filled with jelly and topped with dusted sugar. But Israeli bakers have also trotted out an ever-increasing variety of donuts adorned with decadent toppings. Click here to sample Israel’s amazing variety of donut flavors.

Hanukkah is showtime in Israel. Across the country, elaborate plays and musicals are staged, perhaps to help keep kids entertained while they’re off from school (yes, Hanukkah is vacation time in Israel). Among the best-known of these is the annual Festigal show, a musical production that pits major Israeli stars against one another in musical numbers.

Learn how to play this Hanukkah game with our video and written instructions. 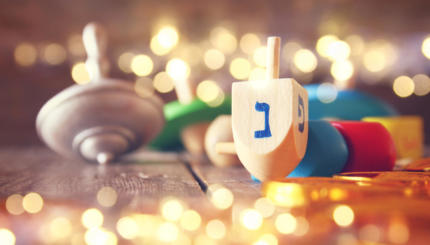 What Do the Letters On the Dreidel Stand For?

The four-sided top has slightly different markings depending on where in the world it was made.