The history of the Ukrainian Jewish community goes back over 1,000 years. Located in the Pale of Settlement, a territory at the western edge of the Russian empire where Jews were forced to live beginning in the late 18th century, the country was once home to over 1 million Jews and was among the largest Jewish communities in Europe on the eve of the Holocaust. The country has played a significant role in Ashkenazi Jewish history as the birthplace of the Hasidic movement and a major locus of Yiddish culture prior to the Holocaust. The Baal Shem Tov (the founder of Hasidism), Yiddish playwright Sholem Aleichem, Marxist theorist Leon Trotsky, Soviet dissident Natan Sharansky, and Israeli prime ministers Levi Eshkol and Golda Meir were all born in Ukraine. And for centuries Jews thrived there, despite repeated episodes of antisemitic violence that culminated in the Holocaust, which saw an estimated 1.5 million killed in that region alone and many more displaced.

The Jewish presence in Ukraine can be firmly dated to as early as the ninth century, but there’s reason to think it may go back even farther. The Khazars, a Turkic people who established a trading empire in southern Ukraine in the sixth century, are believed to have converted to Judaism in the eighth century, but the extent of this is unclear.

The Jewish presence in Kyiv can be firmly established by the 10th century. Sources in the Cairo Geniza note a Jewish presence in the city as early as 930. By the 12th century, historical documents mention a “Gate of the Jews” in the city and a well-known talmudist, Moses of Kiev. At various points, the Jewish community was prosperous, active in trade and in the arenda system, in which large rented estates were used for agricultural purposes. In a pattern not unfamiliar in Jewish history, economic success made Jews ready targets for violent antisemitism.

Jews flourished in Ukraine in the early modern period, becoming one of the country’s most significant ethnic minorities. Among the most prominent Jews of this time were the Brodsky brothers, Lazar and Lev, who grew wealthy in the sugar industry and helped finance a Jewish hospital, synagogue and trade school in the 19th century. Much of the Jewish population was clustered in the major cities, but many also lived in innumerable shtetls, tiny villages that dotted the countryside. Antisemitic violence was commonplace. The Jewish community of Kyiv suffered from multiple expulsions — in the late 15th century and again in the 17th. In both cases, the community was able to reestablish itself. In 1648, tens of thousands of Ukrainian Jews were massacred and hundreds of Jewish communities destroyed by Cossack bands led by Bogdan Chmielnicki, a tragedy that helped lay the groundwork for the embrace of the false messiah Shabbetai Zevi.

It would not be the last time the Jews of Ukraine were targeted for mass murder. In 1768, thousands of Jews were killed in Uman, a Ukrainian town that would later become synonymous with the Breslov Hasidic movement, whose founder, Rebbe Nachman of Breslov, is buried there. The 1821 pogrom against the Jews of Odessa is considered the first in the modern period. It was followed by similar attacks against Jews in the city in 1859, 1871, 1881 and 1905. In the wake of World War I, an estimated 50,000-100,000 Ukrainian Jews were killed in pogroms in the course of a few years.

Rise of Hasidism and Yiddish culture

It may be in part because of the widespread suffering among Ukrainian Jews that the country became fertile ground for spiritual, cultural and political innovation. Among the most significant and lasting of these developments was the Hasidic movement, whose founder, Rabbi Israel ben Eliezer — better known as the Baal Shem Tov (literally “master of the good name”) — was born in a small village in Ukraine around 1700, as were many of his disciples. The Baal Shem Tov established his court in Medzhybizh, in western Ukraine, where he is buried. The town was then a major Jewish center and many prominent Hasidic rabbis were born there, including Rebbe Nachman. From Medzhybizh, Hasidism spread to other Ukrainian towns, including Mezritch, Chernobyl, Belz and Uman — and from there to the rest of Eastern Europe.

Hasidism was a populist movement that, in contrast to the then-dominant Jewish paradigm that sought spiritual uplift through dedicated study, taught that even less-educated Jews were capable of directly encountering God through various ritual practices, notably ecstatic prayer. But Hasidism was not the only response to the situation of the Jews of Ukraine. In the 19th-century, Ukraine became a center of the Jewish Enlightenment (Haskalah), which sought both Jewish cultural renewal and better integration with the surrounding society, and later the nascent Zionist movement, which responded to antisemitic violence by encouraging the return of Jews to their ancestral land in Israel.

Under the influence of the Haskalah, Ukrainian Jews were instrumental in the emergence of both modern Hebrew and Yiddish literature. Isaac Baer Levinsohn, born in the western Ukrainian city of Kremenets, wrote Hebrew poetry and sought to disseminate Enlightenment ideals among the country’s Jews. Sholem Aleichem, born Solomon Naumovich Rabinovich in 1859 in Pereiaslav southeast of Kyiv, was a Yiddish playwright who created the character Tevye the Dairyman, later immortalized in Fiddler on the Roof. Haim Nahman Bialik, born in Ukraine in 1873, was one of the pioneers of modern Hebrew poetry. And Ahad Ha’am, a Hebrew essayist and one of the foremost Zionist thinkers, was born in central Ukraine in 1856.

One of the earliest Zionist groups was established in eastern Ukraine in 1882. Bilu, which took its name from a biblical verse urging Jews to “let us go,” was established in Kharkiv and sent some of the earliest settlers to Palestine that same year. Ukraine would also produce some of the major leaders of the Zionist enterprise. Israel’s second, third and fourth prime ministers —  Moshe Sharett, Levi Eshkol and Golda Meir — were all born in Ukraine. So was Yitzhak Ben-Zvi, Israel’s second (and longest serving) president. And Natan Sharansky, a Soviet refusenik whose plight helped galvanize the fight for Soviet Jewry in the 1980s, was born in Stalino (now Donetsk) in 1948.

Even before the arrival of the Nazis, antisemitism was rife in Ukraine. In 1913, a Ukrainian Jew named Menachem Beilis was tried in Kyiv on charges that he had ritually murdered a teenage boy two years earlier. Beilis was ultimately acquitted and later emigrated to the United States, but the case — much like the Dreyfus Affair in France a decade earlier — convinced many Jews of the deep antisemitism at the heart of the Russian Empire and drove many to emigrate. Violent pogroms against Jews continued as the 19th century turned to the 20th. In the wake of World War I and the 1917 Russian revolution, Jews in Ukraine were subject to one of worst massacres in Jewish history. As many as 100,000 were killed, raped and tortured over a period of several years, and many more were left homeless when their towns were burned. The violence was so horrifying that when a Russian Jew was tried in Paris for killing one of the leaders of the anti-Jewish violence, a jury acquitted him.

Yet the Jewish population remained robust. Depending on how one counts, Ukraine was home to the largest Jewish community in Europe on the eve of the Nazi invasion, with some 2.7 million Jews, equalling about 5 percent of the population.

The western part of modern-day Ukraine was under Polish control when the Germans invaded Poland in 1939, initiating World War II. Most of the Jewish population of these areas fared much worse than those in the central and eastern parts of the country, where hundreds of thousands fled east as the Germans advanced into Ukraine in the summer of 1941. Within months of their arrival, they would perpetrate one of the worst massacres of the war on the outskirts of Kyiv, when over the course of just a few days 33,000 Jews were shot and buried in a mass grave at a ravine known as Babi Yar (now more commonly referred to as Babyn Yar). Similar (though smaller) mass killings also took place in Lviv and Odessa.

Babi Yar would serve as a foretaste of what was to come for the Jews of Ukraine. Rather than deport the Jews to distant camps as was done elsewhere in Europe, in Ukraine special German military forces killed most of the Jewish population close to where they lived, often in concert with local collaborators. In total, an estimated 1.2–1.6 million Jews were killed in Ukraine during the Holocaust — or some 60 percent of the prewar Jewish population.

After the war, returning Jews faced a hostile reception from their Ukrainian neighbors. And as a republic of the Soviet Union, state-sanctioned antisemitism under Communist rule made life difficult for Jews. Still, some 800,000 Jews lived in Ukraine in the 1950s, with most clustered in the country’s largest cities. But as with elsewhere in the Soviet Union, Jewish life was highly circumscribed.

As a result, the Jewish population declined substantially in the second half of the 20th century. After the collapse of the Soviet Union, Jews emigrated in mass numbers. Some 80 percent of the Jewish population is estimated to have left, mainly for Israel and the United States, after 1991. According to Ukrainian census data, barely 100,000 Jews remained in the country by 2001.

Estimates of the total Jewish population of Ukraine today vary widely. The Institute for Jewish Policy Research puts the core Jewish population at 43,000 and the enlarged Jewish population — including those of Jewish parentage who do not self-identify as Jews and the non-Jewish spouses and children of Jews — at 140,000. The IJPP puts the number of Ukrainian Jews who would qualify for emigration to Israel under the country’s law of return at 200,000. The European Jewish Congress says the Jewish population could be as high as 400,000.

With the collapse of the Soviet Union in 1991, Jewish life gradually began to reconstitute itself across the region. After a half century in which the main synagogue in Kyiv was the country’s only functioning Jewish house of worship, today there are now dozens. According to the EJC, there are 75 Jewish schools in Ukraine. In 2012, the largest Jewish community center in Europe opened in the eastern city of Dnipro. Known as the Menorah Center, the 22-story, $100 million center towers over the city and includes a hotel, synagogue, luxury mikveh ritual baths, social hall and several kosher restaurants.

In 2021, the government finally unveiled a memorial to the murdered Jews at Babi Yar after years in which the site was marked only by a handful of neglected monuments. The site is intended to eventually encompass a museum, a synagogue and additional monuments. The inauguration ceremony was presided over by Volodymyr Zelensky, a Jewish comedian who became Ukraine’s sixth president in 2019. “The time for memory has come,” Zelensky said at the ceremony, which was also attended by the president of Israel and the chancellor of Germany. 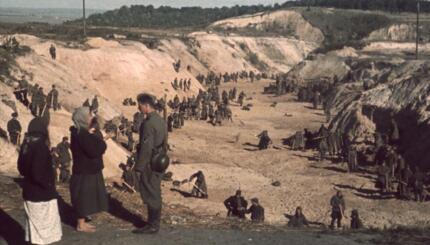