Lev Davidovitch Bronshteyn was born in 1879 in southern Russia, a part of the Russian empire where more mobile, entrepreneurial Jews had been settling for more than half a century. His parents were wealthy landowners, and though they spoke Yiddish with each other, Lev was raised in a Russian-Jewish milieu.

After completing traditional Jewish school, heder, he was sent to the great southern capital of Odessa, where thinkers and writers like the cultural Zionist Ahad Ha-Am and the Yiddish and Hebrew writer Mendele had turned this commercial port on the shores of the Black Sea into one of the greatest Jewish think tanks of the late 19th century.

Trotsky’s political awakening was slow. In his autobiography, he reports that when he first moved to Odessa, he “did not know even the name of Engels, and could hardly say anything definite about Marx. As a matter of fact, I probably had never heard of him.”  But the installation of the conservative Tsar Nicholas II in 1895, which dashed liberal hopes after the death of Alexander III, and Trotsky’s own move to a new, more radical school possibly awakened political tendencies in him.

In 1896, Bronshteyn joined a small cell of underground socialists in Odessa. Since socialism was illegal, he was arrested two years later by tsarist police and eventually exiled to Siberia, a common punishment for political prisoners. In 1902, Bronshteyn, who now went by the name Trotsky as a means of masking his identity in exile, escaped and ended up in London where he met Georgy Plekhanov, founder of the Social Democrats, the Marxist party that would spawn the Bolsheviks and Mensheviks. In London, Trotsky also met the future leader of the 1917 Bolshevik Revolution, Vladimir Lenin. Trotsky, Plekhanov, and Lenin worked together on the Social Democrats’ newspaper Iskra (The Spark), the future Pravda, mouthpiece of world communism.

In 1905, during the first leftist attempt to overthrow the tsars, Trotsky returned to Russia and in St. Petersburg he organized the first revolutionary soviet–a city council run by popular election. This was the socialists’ attempt to organize rule from below, by the workers of the city, rather than from above by the tsars. At age 26, Trotsky was appointed president of the Petersburg soviet. After the tsars agreed to relinquish autocratic power and set up a parliament called the Duma, ending the 1905 revolution, Trotsky, whose politics were still too radical, was again arrested, imprisoned, and exiled to Siberia. However, he managed to escape once more, this time to Vienna.

Trotsky worked as a journalist in Vienna, and he eventually became an editor of the underground Pravda. He kept a close eye on Russian affairs, and wrote bitterly about the 1913 Beilis trial, when a Jewish factory owner, Mendel Beilis, was put on trial under false charges that he ritually murdered a Christian child around the time of Passover. Trotsky argued that the case proved that tsarist Russia was intrinsically anti-Semitic, and the only solution to anti-Semitism in Russia was to overthrow the regime.

With the outbreak of World War I, Trotsky began another nomadic period. He moved to Zurich in 1914 and then to Germany, where he was briefly imprisoned for opposing the war, which socialists understood as a conflict between imperial capitalist leaders, being unnecessarily fought by the working classes of each nation.

In 1915 he moved to Paris, editing the socialist weekly Nashe Slovo (Our Word), but he was expelled from France for anti-war activities. After a short stay in New York as the editor of the socialist newspaper Novy Mir (New World), Trotsky returned to Russia in 1917. He joined the Bolsheviks in St. Petersburg and established the magazine Forward (Vperyod), related only to the more famous Yiddish-language Forverts by their socialist politics.

In October 1917, the Bolsheviks overthrew the provisional government, and Trotsky’s politics became mainstream.

The establishment of the Soviet Union exposed Trotsky’s ambivalence about his Jewishness. At first Trotsky refused a high position in the Bolshevik government, because he thought it would not serve the interests of the new communist regime if too many Jews occupied important positions. He ultimately accepted, and during the civil war that broke out after the Bolshevik takeover, he became head of the Red Army and a member of the Politburo, the decision-making body of the fledgling government.

In the chaos of civil war, new waves of anti-Jewish pogroms broke out throughout Ukraine, and Trotsky considered, but ultimately rejected, the idea of organizing special Jewish sections within the Red Army. When the Chief Rabbi of Moscow, Jacob Maze, asked Trotsky personally for extra security to protect Russian Jews from these pogroms, Trotsky answered that he was a Bolshevik and did not consider himself a Jew.

After Lenin’s death in 1924, a fight for power among leading Bolsheviks ensued, and Joseph Stalin strengthened his own position in the government. Stalin and Trotsky differed on some fundamentals of the communist revolution. While Stalin concentrated on the development of communism in the Soviet Union, Trotsky was dedicated to the belief that Russia should catalyze worldwide communist revolution.

In 1926 Trotsky was expelled from the Politburo because of these differences of opinion. In 1927, he was exiled to Kazakhstan, and then two years later, from the Soviet Union.

Trotsky lived in Turkey (1929-33), France (1933-35), Norway (1935-36), and finally found asylum in Mexico (1936-1940), where many socialist Jewish exiles from Nazi Germany and elsewhere had settled. By then, Trotsky had become one of the world’s most outspoken critics of Stalin and his political system. In 1938 Trotsky established the Fourth International, a socialist, anti-Stalinist international movement.

Trotsky’s name became the terrifying bogeyman of the Stalinist Soviet Union during the Great Purges of 1936-1938, as one after another Communist Party leader was accused of supporting the exiled renegade. In the United States, on the other hand, Trotskyism enjoyed support of influential critics and intellectuals, some associated with the journal Partisan Review, and many of whom were Jewish.

During his period of exile, with the rise of Nazism and state-sponsored anti-Semitism, Trotsky began responding more openly to Jewish issues. In several interviews, he reaffirmed both his opposition to Zionism and his support for Jewish workers making common cause with workers of the countries in which they live. He also recognized the centrality of Jewish workers to the socialist movement in America, and the potential importance of organizing in Yiddish.

As Trotsky became louder in his criticism of Stalin, Stalin became more committed to silencing him. On August 21, 1940, Ramon Mercador, a Stalinist agent who had infiltrated Trotsky’s Mexico City community of socialists, killed him with an ice pick.

Trotsky’s most important biographer, Isaac Deutscher, coined the phrase “non-Jewish Jew” to describe Trotsky and his generation of universalist thinkers. Like Rosa Luxemburg (“Red Rosa”), who was murdered in 1919 for being too far left of the emerging socialist order in post-World War I Berlin, Trotsky’s life was cut short for being a loud-mouthed socialist. Despite his aversion to any self-identification as a Jew, Trotsky’s biography of universal ideas, constant physical movement, and dramatic assassination, reads like a very Jewish 20th-century story.

The organization and development of the Bund, the General Union of Jewish Workers. 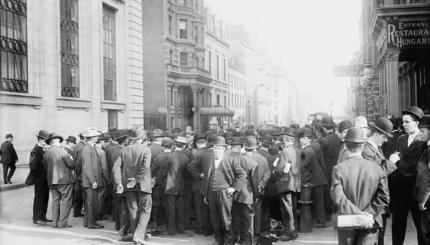 The birth and growth of American Jewish socialism.