Most Jewish communities around the world celebrate the holiday of Hanukkah with communal gatherings, parties, songs, and games. Hanukkah candles are often lit, Hanukkah songs are sung, and these celebrations usually include eating traditional Hanukkah foods such as latkes. Games of chance are played, while everyone tries their hand at spinning a dreidel (top) and Hanukkah gelt is often distributed to children.

Jewish law does not require Jews to observe Hanukkah anywhere outside the home. However, some special liturgy and readings are added to the daily and Shabbat prayer services that take place in synagogue during Hanukkah.

In distinction to the major festivals, the standard weekday or Shabbat service is recited, rather than a special holiday version. A special insert in the Amidah (standing or silent prayer) called Al Hanissim (“concerning the miracles”) addresses the holiday of Hanukkah and offers thanks for God’s role during that event. Hallel (Psalms of praise) is also recited during the eight days of Hanukkah while the penitential prayer is omitted during this holiday.

However, in distinction to non-holiday times, the Torah is read on a daily basis during Hanukkah. The reading from the Book of Numbers, Chapter 7 describes sacrifices brought by the tribal leaders in commemoration of the dedication of the Tabernacle, a ceremony that lasted more than a week. It is the theme of dedication that is claimed to tie the Torah readings to the holiday of Hanukkah. On the Shabbat that falls during Hanukkah, there is a special haftarah (reading from the Prophets) taken from Zechariah, Chapter 4. The haftarah begins by calling for jubilation as God once more dwells among the people. Toward the end of the reading, the prophet describes a lamp stand (menorah), a symbol of the Temple with an obvious connection to Hanukkah. If there is a second Shabbat on Hanukkah, a special haftarah from I Kings, Chapter 7 is read. This short haftarah (verses 40-50) describes Solomon’s completion of the building of the Temple. Again, the symbolic relation to Hanukkah is self-explanatory.

From Minor Festival to Major Event

While Hanukkah itself is a rather minor festival within the frame of Jewish law, the community has embraced it in a significant way and established it as a major event.

Jewish communities around the world view Hanukkah as a celebration of the spiritual survival of Judaism and the victory of Judaic values over a complete, and in many cases enforced, assimilation. Celebrating Hanukkah enhances self-awareness of Jewish adults and emphasizes their responsibility for the Jewish education of their children.

Although Jewish law does not mandate the celebration of Hanukkah anywhere outside the home, Jewish communities have chosen to broaden the scope of Hanukkah and recognized a public aspect of the holiday. Since it is a minor holiday and not a major object of traditional rabbinic concern, there exists tremendous latitude surrounding its observance. As a matter of fact, it is only in the Western world that Hanukkah — under the influence of roughly simultaneous Christmas celebrations — has achieved for many people the dubious and erroneous distinction as the “Jewish Christmas.” The comparison may be based on one common element: Each holiday is designated as a “holiday of light.”

Be that as it may, the open gathering of the community on Hanukkah has become a defiant and public statement of the community’s attachment to Judaism and its ideals. Public lighting of Hanukkah candles has become widespread in some sectors of the Jewish community, especially but not at all uniquely among the Chabad-Lubavitch Hasidic sect, which organizes public celebrations around the world.

Lighting candles together around the time of the winter solstice becomes a strong bonding event for all those involved. Falling between the Jewish New Year in the fall and the holiday of Passover (Pesach) in the spring, Hanukkah serves to break up a long stretch without any major communal religious celebrations. Hanukkah interrupts that lengthy time span and pulls us into our larger Jewish frame, connecting us again to our community.

What is the Origin of Hanukkah? 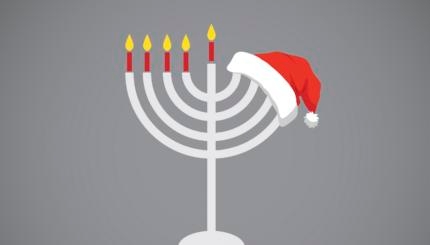 Both are widely observed gift-giving holidays that fall in December, but the similarities stop there.

A holiday influenced by secular society