Technically, a meal is considered any repast in which bread is consumed, so Jewish meals begin with the blessing over bread and then the sharing of bread together. The accompanying blessing is widely known to most Jews, who have heard it since childhood and who may even have memorized it just by having said it so often.

Many Jews follow traditional Jewish precedent by beginning every meal this way; others reserve it for festive occasions like wedding banquets or holiday dinners. In any case, saying it accomplishes two things. First, it draws attention to the privilege of having food to eat. Second, the blessing’s words connect an ordinary meal with a symbolic lesson about the end of time.

Read and listen to the full text of Hamotzi, the blessing over bread, and other Shabbat blessings, here!

The words of the blessings are succinct and to the point: “Blessed are You, Adonai our God, ruler of the universe, who brings forth bread from the earth.” (Barukh ata Adonai Eloheinu melekh ha’olam hamotzi lehem min ha’aretz.) Find the Hebrew text and audio of the Hamotzi here.

Giving Thanks for the “Delivery System”

But bread does not actually come from the earth, except in its raw form as grain—so the blessing ought to have referred to the grain, not to the finished product, bread. That, at least, is what the Rabbis imply in two laconic but insightful comments.

Bread in the Garden of Eden

The first comes from a midrash called B’reishit Rabbah, part of a many-volume compilation of rabbinic comments covering several books of the Bible. In this one, a fifth-century collection of midrash to Genesis, we find a discussion of the various kinds of trees that must have existed in the Garden of Eden. God tells Adam and Eve that they may not eat from a particular tree, “the tree of knowledge of good and evil” (Genesis 2:18), otherwise identified as “the tree in the middle of the garden” (Genesis 3:3). But all the other trees were available for their pleasure, and the Rabbis musingly wonder what they were. This was Eden, after all-pure paradise. Surely Eden had trees that far excelled the ones we now know.

Rabbi Z’ira thinks Eden was so perfect that it contained “bread trees as large as the cedars of Lebanon.” He draws his lesson from the fact that when Adam and Eve are expelled from the garden, God says, “Because you ate of the tree of which I commanded you, saying, ‘You shall not eat of it’…by the sweat of your brow shall you get bread to eat.’ Rabbi Z’ira concludes that before the expulsion they must not have had to bake their own bread.

What It Takes to Bring Bread to Our Tables

Today, most of us just walk into a bakery to buy bread, but Rabbi Z’ira knew how hard it is to make it. Everywhere in antiquity, and in much of the world still today, farmers first plough the earth by animal-drawn implements that are hard to use; then they sow the seed by hand. Thereafter, they anxiously wait and pray for rain, without which there will be no crops come spring.

Even if the grain does grow and ripen, there is still the hard task of reaping it and sorting it so that inedible matter is removed. The grain must then be extracted from the husk by threshing. Then it is winnowed—that is, tossed into the air with a pitchfork so that the lightweight coverings of the kernels, called chaff, are blown away, leaving only the heavier kernels themselves that can be ground into flour. The flour now is sifted, again to separate out any foreign matter, then mixed with liquid and kneaded into dough. Only then can baking occur.

Keenly aware of the intensive labor that goes into bread, rabbinic imagination conjured up an Eden-like existence where fresh and finished loaves of bread actually do grow on trees. Already, then, we have the moral lesson against taking the bread we eat for granted.

Once and Future Paradise—with Bread

But there is more. The Rabbis perceived time as being divided into three eras: a mythical time past, when everything was perfect and Eden-like, and when bread growing on trees could be consumed without labor; the reality of time now, the era of historical time in which we live, when we get our bread with difficulty so that we are lucky to have any food at all; and a hoped-for time to come, a messianic age at the end of days when paradise would return just as in the days of the Garden of Eden.

Surprisingly, neither party holds that the blessing over bread refers to the actual bread that we hold in our hands at the time when the blessing is said. Rabbi Nehemiah’s minority view is that our daily bread reminds us of time past, when bread trees grew from Eden’s soil. The majority, and therefore the official Jewish wisdom today, identifies the bread of the blessing as the bread of a messianic future. Our blessing is much more than a vote of thanks for our daily food. It constitutes also a statement of faith in a time to come when all will have enough to eat, free of the backbreaking work that is now required by most of the world’s population just to put food on the table.

Reprinted with permission from The Way Into Jewish Prayer (Jewish Lights). 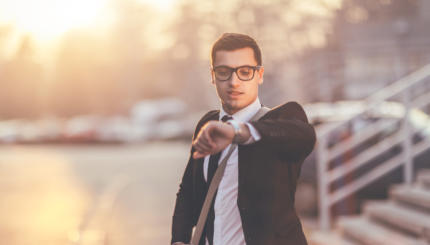 Find out when Shabbat starts.