Bread is amazing on many levels. It’s delicious. It’s filling. It’s great plain or as part of a sandwich. And did I mention it’s delicious? Today’s daf points out another reason that bread is amazing — it can be used to establish an eruv. But what kinds of bread are permissible?

The Gemara explores a number of aspects of bread to try to answer this question. One of those aspects is the ingredients used to make various kinds of bread. While at its core, most bread is made with wheat, the Gemara raises the possibility of using breads made from different grains.

Rabbi Zeira said that Shmuel said: One may establish an eruv even with rice bread or with millet bread.

Mar Ukva argues that the bread used for an eruv has to be edible; while millet might be tasty in porridge or other foods, it apparently does not bake up into edible bread. The Gemara continues by explaining that when we are talking about bread that is edible we mean bread that is edible to humans.

Rav Hiyya bar Avin said that Rav said: One may establish an eruv with lentil bread.

The Gemara raises a difficulty: Is that so? Is such bread edible? But there was that lentil bread in the days of Mar Shmuel, which he threw to his dog, and even it would not eat it.

Dogs are not famous for their discerning palates; anyone who has a dog knows that they will eat almost anything. So a dog eating something does not make it food fit for humans. But why would Mar Shmuel make such terrible bread to begin with?

The Gemara explains: That bread which the dog refused to eat was a mixture of various types of grain, similar to that which the prophet Ezekiel was commanded to eat, as it is written: “Take you for yourself wheat and barley and beans and lentils and millet and spelt and put them in one vessel and make them for yourself into bread” (Ezekiel 4:9).

Apparently Mar Shmuel was conducting an experiment to reconstruct the bread that God commands Ezekiel to make and eat as a symbol of the future siege and destruction of Jerusalem, and the defilement of the Israelites as a result of the conditions of exile. This bread — like destruction and exile — is terrible, and even a dog spurns it.

So then what kinds of bread can be used for an eruv? Bread made of ingredients that are edible, in combinations that are edible, to humans. Breads that are filling, life-giving, and delicious. Because the point of the eruv is to join different families and homes together into a single home, with a single shared “pantry.” The eruv symbolizes unity — for it is within that unity that we can see possibilities, like the possibility of carrying on Shabbat. Tasty!

Read all of Eruvin 81 on Sefaria.

This piece originally appeared in a My Jewish Learning Daf Yomi email newsletter sent on October 29th, 2020. If you are interested in receiving the newsletter, sign up here.

How to be a Fabulous Shabbat Dinner Guest

What to expect as a guest at someone's Friday night table. 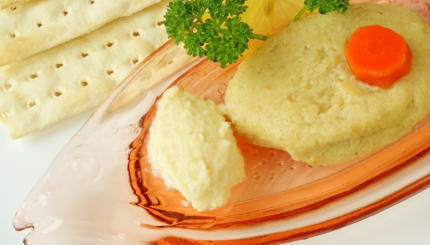 A history of the Jewish fish product.