On today’s daf, the mishnah provides measurements for a window that is considered large enough to halakhically connect two courtyards for the purposes of making just one eruv:

If there is a window measuring four by four handbreadths between two courtyards, and it is within ten handbreadths of the ground, the residents make two eruvim — or if they wish, they can make one eruv.

We are next presented with a math puzzle. The Talmud wants to know: if a standard, square window needs to measure at least 4×4 to be large enough to potentially “connect” the two courtyards for the purposes of eruv, what is the minimum circumference of a circular window that would also fit the mishnah’s requirements — that is, a circular window that would encompass the minimum size square? If you’re so inclined, give it a try now! 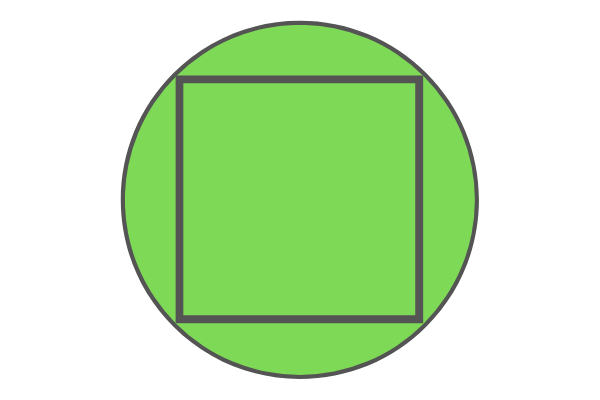 OK, do you have an answer? Let’s see how your math compares to the rabbis’!

This second answer is much closer, but relies on approximating pi by a value of three instead of using its proper value of 3.1415… and rounding the square root of two down from 1.4142… to 1.4 (those ellipses indicate that both pi and the square root of 2 are irrational numbers, and the numbers after the decimal points continue infinitely without repeated pattern). If we use more precise values for pi and √2, we discover that the sages’ suggestion of 16.8 is actually a bit too small to circumscribe a 4×4 square. So while Rabbi Yohanan grossly overestimated, the other sages were off too and dictated a round window slightly too small.

If you are disappointed at the imprecision of the sages’ math, you are not alone. Medieval Jewish thinkers grappled with the Talmud’s inexact calculation as well, especially since it seems to lead to a halakhic mistake — a window that is a bit too small. Both the Tosafot on Eruvin 14a and Maimonides’ commentary on the Mishnah struggled with the fact that the rabbis round pi down to 3, but they couldn’t come up with any real way of resolving this mathematical error without contradicting the rabbinic ruling.

The rabbis of the Talmud were creative and brilliant legal and exegetical minds, but rabbinic culture did not prize all forms of intellectual pursuit to the same degree. Although they weren’t exact about the values of these mathematical constants, they were at least pretty close.

Incidentally, the right answer is as follows: the diameter of the circle that would circumscribe a square is arrived at by multiplying pi times the length of the diagonal of the square (which is the side length times the square root of two). In this case, it comes to approximately 17.77 handbreadths.

Read all of Eruvin 76 on Sefaria.

This piece originally appeared in a My Jewish Learning Daf Yomi email newsletter sent on October 24th, 2020. If you are interested in receiving the newsletter, sign up here.