Yesterday we saw that when a young student stumbled on to the true understanding of the merkavah (divine chariot) as described in Ezekiel 1, he spontaneously burst into flame. This unfortunate accident prompts the sages to consider banning the Book of Ezekiel altogether, lest other unwitting individuals discover the divine secret and get burned.

But what happens when it is not a hapless student but the greatest rabbis who contemplate the merkavah? Can they do it safely? This is the question addressed in several stories on today’s daf, and it includes one of the most famous in the Talmud.

The sages know that mystical speculation is playing with fire — literally. For instance, when Rabban Yohanan ben Zakkai, credited elsewhere in the Gemara with saving rabbinic Judaism from extinction, and his student Rabbi Elazar ben Arakh (also no slouch) are riding together, the latter gains his teacher’s permission to recite just a single piece of the merkavah tradition. This is what happens:

Rabban Yohanan ben Zakkai alighted from the donkey, and wrapped himself, and sat on a stone under an olive tree.

Rabbi Elazar said to him: My teacher, for what reason did you alight from the donkey?

He said: Is it possible that while you are expounding the merkavah, and the Divine Presence is with us, and the ministering angels are accompanying us, that I should ride on a donkey?

Immediately, Rabbi Elazar ben Arakh began to expound the merkavah, and fire descended from heaven and encircled all the trees in the field, and all the trees began singing.

We always knew the rabbis thought learning had enormous power. But when it comes to the study of the merkavah, its power is otherworldly. Rabban Yohanan ben Zakkai instinctively knows what will happen when his student begins to recite: God will descend among them. Ben Zakkai dismounts his donkey out of respect and wraps himself in his cloak, presumably to hide his face so he cannot look directly at God.

In a similar story, this time about Rabbi Yosei the priest and Rabbi Yehoshua, God’s presence looks very different: a clear sky is suddenly thronged with clouds that crack apart to admit a beautiful rainbow. Ministering angels rush to the scene, rejoicing as if it were a wedding.

In both of these stories, God’s presence, called down simply by the act of studying the divine chariot, brings grave danger (a ring of fire, an ominous cloudbank) but also ecstatic joy (singing trees, celebrating angels).

It is in this context that we encounter one of the most famous stories in the Talmud. Now, instead of one hapless student stumbling on the secret, or a cautious rabbi expounding a fraction of it to another (in keeping with the Mishnah’s admonishment that the merkavah is only taught in one-on-one settings), we have four rabbis who together embark on a journey of mystical discovery:

Four entered the pardes and they are as follows: Ben Azzai; and ben Zoma; Aher, and Rabbi Akiva.

Rabbi Akiva said to them: When you reach pure marble stones, do not say: Water, water, because it is stated: “He who speaks falsehood shall not be established before my eyes.” (Psalms 101:7)

Ben Azzai glimpsed and died. And with regard to him the verse states: “Precious in the eyes of the Lord is the death of his pious ones.” (Psalms 116:15)

Ben Zoma glimpsed and was harmed. And with regard to him the verse states: “Have you found honey? Eat as much as is sufficient for you, lest you become full from it and vomit it.” (Proverbs 25:16)

Aher cut down the shoots.

Versions of this story, told in just a few lines, are found scattered throughout rabbinic literature. It is also the inspiration for at least two modern novels: Milton Steinberg’s As a Driven Leaf and Myla Goldberg’s Bee Season. The story was clearly as resonant for the ancient rabbis as it is for us today.

These four rabbis don’t just study the merkavah; they go in search of it. The word pardes literally means orchard and is etymologically linked to the word paradise, both reasons interpreters have supposed that it alludes to the Garden of Eden, the original paradise, with its forbidden Tree of Knowledge at the center.

Another interpretation holds that this four letter Hebrew word is an acronym for the four traditional methods of biblical interpretation: p’shat (plain), remez (hint), sod (secret) and drash (inquiry) — suggesting the journey these four undertook had to do with attaining the most esoteric levels of scriptural understanding. However we understand where the rabbis went — Rashi suggests they literally ascended to heaven by speaking one of the divine names — they were clearly in search of some deep mystical understanding.

We don’t know why these four rabbis went on such an obviously dangerous mission. Perhaps the thought of meeting God was impossibly compelling. Three would never be the same again. Ben Azzai immediately loses his life, Ben Zoma is harmed (usually understood to mean that he loses his mind; the verse attached to him suggests his system is overwhelmed by God’s glory), Aher — a rabbi who is simply referred to here as “other” because he became a heretic, commonly presumed to be Elisha ben Abuya — “cut down the shoots,” meaning perhaps that he annihilated future generations. Only Rabbi Akiva emerges from God’s presence unscathed, putting him on par with Moses who was able to see God panim el panim, face to face.

Why Rabbi Akiva? Certainly, he was a significant rabbi. In fact, if you were asked to pick the most significant rabbi of all time, Akiva would be a defensible choice. More than any other, he was responsible for designing the entire rabbinic enterprise. His philosophy of midrashic interpretation, his halakhic thought, his organization of the Oral Torah, even his decisions about what to include in scripture — all of it shaped the rabbinic project (see, for instance, Sanhedrin 86a). He was so significant that there are many legends like this one about his life, from his humble beginnings to his iconic marriage and heart-breaking martyrdom. The Talmud relates that Moses himself was privileged to sit in Akiva’s classroom — and understood nothing, acknowledging Akiva as the greater scholar. (Menachot 29b)

Perhaps the real key to Akiva’s genius is what we see on display in this story, his Einstein-like ability to creatively imagine that which is difficult to expect and nearly impossible to conceive. As he and his colleagues prepare to ascend to God’s presence, he warns them: “When you reach pure marble stones, do not say: Water, water.”

Akiva knows that the divine realm will be unlike anything experienced on earth. He seems to have anticipated that the marble of God’s palace is so perfectly polished it will shimmer blindingly, like water under a hot sun. He warns his colleagues: Do not trust your eyes. Do not assume you know what you are seeing. Do not be blinded by radiance, and keep your focus. But in the end, his is the only mind that can adapt to such splendors.

Read all of Chagigah 14 on Sefaria.

This piece originally appeared in a My Jewish Learning Daf Yomi email newsletter sent on February 23nd, 2022. If you are interested in receiving the newsletter, sign up here. 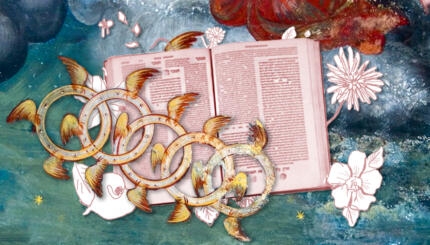 To see and be seen.