Jewish mysticism proper may be said to have begun around the second century C.E. (although some of the early texts may be older) with the advent of merkavah mysticism.

The merkavah mystics focused their attention on the startling vision that opens the book of Ezekiel, in which the exiled and shackled prophet sees a manifestation from “the heavens,” an astonishing tableau ringed with fire, of four winged creatures “like burning coals of fire,” faces, surrounding a heavenly chariot. (Obviously, Ezekiel’s vision itself is evidence that there was some mystical strain in the prophetic era, long before the period of the merkavah mystics.) The idea of the students of the chariot was to re-create Ezekiel’s experience and ascend in the chariot to explore the heavens, or the chambers of which Heaven was supposed to consist. The latter was the chief province of the heikhalot mystics who, in works like Heikhalot Rabbati (The Teaching of the Chambers), expounded on the journey through heavenly precincts.

These mystical writings are profoundly visionary in nature, clear examples of scholar Moshe Idel’s intensive mode (a type of mysticism aimed at ecstatic experience), a search for the formula that would allow practitioners to make the same journey the prophets had made. Jumping off from Ezekiel’s vision or passages in the Shir Ha-Shirim (Song of Songs), they paint a vivid and imaginative picture of God’s heavenly domain. In one of these works, Shi’ur Komah (The Measurement of the Height), the author actually describes the Creator in anthropomorphic terms, a humanlike creature of such gigantic dimensions as to occupy the whole cosmos: his neck is 130.8 million miles long, his fingers are each 150.3 million miles in length.

The mystics who engaged in such creative speculations are unknown to us, but their works are proverbially (and incorrectly) attributed to such prominent men as Akiba and Rabbi Ishmael (sages of the first and second century C.E.), and there is a tradition that they were, in fact, members of Akiba’s circle. Within the rabbinic literature, there is some justification for that view. The Mishnah, Tosefta, and both Babylonian and Palestinian Talmuds all contain parallel passages in which it is explicitly stated that “it is forbidden to expound the Work of the Chariot before more than one” listener, passages in which Rabbi Akiba always figures prominently. Clearly, what Akiba and his colleagues were acknowledging is that a secret known by more than two people is not a secret, and a master must be sure of a pupil before giving him such highly charged information. Indeed, in each version of this proscription, the teachings are explicitly linked with two other topics that may be conveyed only under highly regulated circumstances: the secrets of Creation and the laws of incest.

In the Talmud and midrash, visions of the Divine Throne are achieved by studying the Torah. 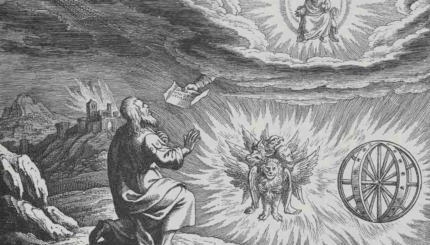 The first chapter of the biblical book of Ezekiel served as the textual starting point for the merkavah mystics—and hints at an image of God.