“Judaism only cares about what you do,” many of us have been told; “it doesn’t care about what you feel.” It is a notion no less false for being widespread. Jewish sources are in fact passionately invested in inwardness and motivation; the heart is central both to Jewish spirituality and to Jewish ethics. As a particularly salient example, let’s take our interactions with people who are poorer than we.

When we lend money to a fellow member of the covenant, this week’s Torah portion, Mishpatim, instructs, we must not act as a creditor toward them; we must not charge them any interest. If we take the borrower’s garment in pledge, we must return it to them each night. Not content merely with laying down the law, the text explains why we may not keep the borrower’s garment overnight: “It is his only clothing, the sole covering for his skin. In what else shall he sleep?” (Exodus 22:24-26) The Torah makes a direct appeal to empathy: Imagine how hard it must be to be destitute, we’re told, and act accordingly.

Why does parashat Mishpatim appeal to the heart? On one level, the answer may be that the Torah will do everything it can to ensure that the poor are treated well. Reason may move some people, but most of us rely on emotion for motivation. On this level, at least, what matters most is action; the Torah turns to the heart to secure proper behavior on our part. This interpretation is arguably bolstered by another dramatic declaration appended to the law: “Therefore, if he cries out to Me, I will pay heed, for I am merciful” (Exodus 22:26). The Torah is not above threatening us when the goal is getting the indigent what they need.

Yet on another level, I think something else is going on too. The Torah wants us not just to perform the right action but also to do so for the right reason.

Imagine you have a friend who is stricken with cancer. Anxious and terrified, she asks you to accompany her to chemotherapy sessions. You agree because you feel you have to, but you’re reluctant and frankly a little bit resentful. You go, but your heart is decidedly not in it. Years later, your friend is diagnosed with cancer again. In the meantime you’ve worked on yourself, grown kinder and more compassionate. Again your friend asks you to accompany her to her treatments and again you say yes, only this time you do so full-heartedly, thinking to yourself that nothing could be more important to be present with a friend in need.

You performed the same action both times — you were asked to go, and you went — but it seems odd to suggest that there is no moral difference between your reaction each time your friend needs you. Yes, you did what you were asked each time, but your motivational state changed dramatically between the first instance and the second. You grew morally.  (It’s difficult to imagine that you were as fully present and loving toward your friend the first time — your underlying attitude likely made a visible, qualitative difference. But my point is that even were this not the case, there would still be a significant moral difference between your first response and your second.)

This may be part of what the parashat Mishpatim has in mind. We’re instructed not to keep our neighbor’s garment in pledge, so we don’t. But in one instance we’re filled with bitterness towards our neighbor (“Why couldn’t he have just asked someone else? How did he get into this situation in the first place?”) whereas in another we’re moved by genuine, heartfelt concern for his well-being. There is a significant moral difference between the two responses and the Torah wants to draw us down the second, superior path.

Another example: In Leviticus, the sabbatical year (shmita) is about land: every seventh year the land is to lie fallow. But in Deuteronomy, shmita is about something else entirely, namely debt forgiveness: every seventh year debts are forgiven so that people who have fallen into debt can have a fresh economic start. The text is emphatic that lenders should not cease making loans out of fear that the shmita year will release borrowers from having to repay them; when people are in need, Deuteronomy says, even entertaining the thought of withholding loans is downright “wicked.” The text warns Israelites to be “neither hard-hearted nor tight-fisted” in dealing with their needy kinfolk. Notice the concern both with action — a tight-fisted refusal to give a needed loan — and with emotion — a hard-hearted refusal of empathy for the person who finds themselves in financial straits. Deuteronomy is concerned not only with what people do but also with the spirit in which they do it. The text instructs: “Give to [the poor person] liberally and be ungrudging when you do so, for on this account the Lord your God will bless you in all your work and in all that you undertake.” (15:10) In a careful reading of the verse, the Jewish philosopher Rabbi Joseph Albo (c. 1380–1444) observes that the divine promise of future flourishing is attached not to the action (“give liberally”) but to the spirit in which it is undertaken (“be ungrudging”). Virtue, he reminds us, consists not just in performing the right action, but in doing so willingly and even joyfully (Sefer Ha-Ikkarim, 3:33).

All of this is perhaps most simply encapsulated by the talmudic sage Rabbi Elazar, who insists that tzedakah is rewarded only according to the degree of kindness (hesed) with which it is performed (Sukkah 49a). That we give obviously matters, but how we give does too.

It’s important to avoid misunderstanding. When it comes to assisting those who are poor, Jewish texts always prefer that we give even if we do so only begrudgingly (as long as we don’t broadcast that begrudgingness to the recipient). Giving without heart is undoubtedly better than not giving at all. But giving with heart is better still. 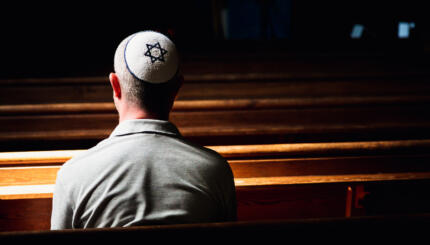 My Very Own Fiscal Cliff

In the spirit of Thanksgiving, let me be sure to say that I am thankful for everything and everyone that ...