Abraham is the founder of Judaism (and thereby of all monotheistic faiths). God singles Abraham out for a unique and special relationship and promises that he will be the father of a great nation — the Jews — and that his descendants will inherit a promised land. Abraham vows to worship only God, making him the world’s first monotheist.

Unlike all the other Biblical characters who came before Abraham, from Adam to Noah, who obeyed God’s commands (or not), Abraham had a profound and personal involvement with the one God. And his deep involvements extended beyond the divine. Abraham was also a loving, loyal, caring human being, who went out of his way to have good relationships with everyone he came into contact with who shared his moral vision. He loved his family and he loved humanity.

Abraham’s relationship with God was complicated. It began when God commanded him to leave his birthplace and travel to Canaan, an unknown land where, it was promised, he would thrive and grow in every sense. But that’s not how it worked out — at least initially.

Abraham and his family (his wife Sarah, his nephew Lot, his retinue of servants) followed the divine command faithfully and left their homes to live in Canaan. And yet as soon as they arrived there, that fertile land was stricken with famine. Their lives were in danger. Abraham had to go down to Egypt, an alien and antagonistic land, where his wife was temporarily taken from him by a wolf-eyed Pharaoh. And it wasn’t just his wife who slipped from his grasp. No sooner did he get Sarah back and return to the promised land, but then there was not enough pasture room for his herds and his nephew Lot’s. Lot went down to Sodom. But Lot got kidnapped and, in the process of getting him back, Abraham was dragged into a war between rival coalitions of petty kings. And all the time Sarah was childless. How would the divine promise of raising up a great nation of descendants be fulfilled without a single child?

Abraham suffered one trial and disappointment after another and yet he still managed to retain his profound faith in God, recognizing that God saw the world through a different prism and perspective than ordinary human beings. This did not mean that he accepted God without question. When he was told that God would destroy the sinful cities of Sodom and Gomorrah, killing every single inhabitant, Abraham challenged God: “Will the Judge of the whole earth not be just?”

A decade went by, and Sarah remained childless. How would God’s promise that Abraham become the father of a great nation be fulfilled without offspring? Sarah took matters into her own hands and gave Abraham her maidservant, Hagar, as a concubine. From their union, Ishmael was born. 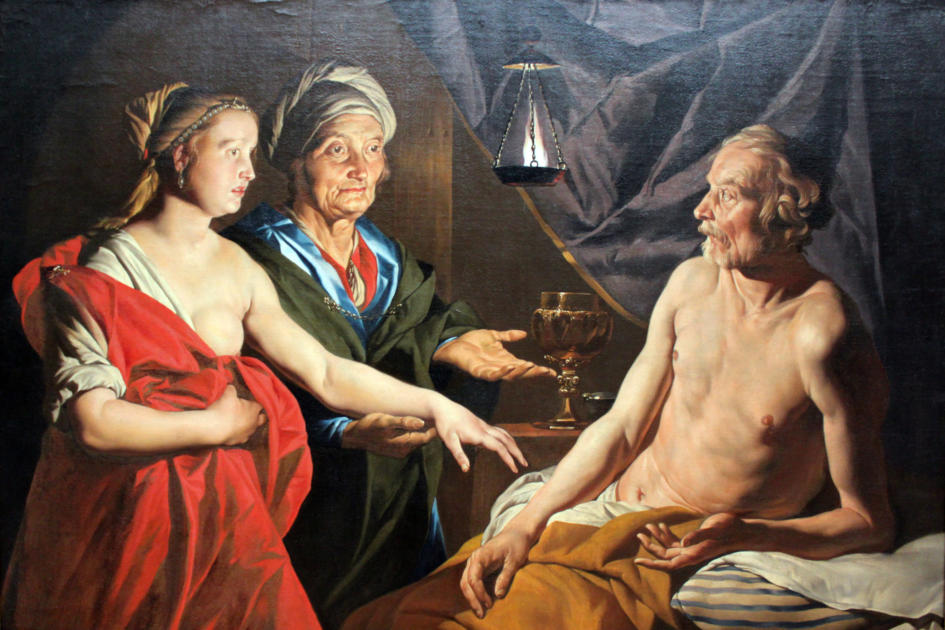 Thirteen years after Ishmael was born, and a quarter century after Abraham had heeded God’s call to remove himself to a foreign land, God gave Abraham a new commandment: to circumcise himself as a sign of their covenant. Though it had been ten long years and God was not apparently fulfilling the divine side of this agreement, Abraham circumcised himself immediately, and he circumcised Ishmael as well. Shortly thereafter, Sarah did conceive and Abraham had a second son, Isaac.

Though he was now happily the father of two sons, one by Hagar and one by Sarah, this was not the end of Abraham’s trials — the worst was yet to come. After granting Abraham that second son, God created the most difficult test yet — God commanded Abraham to sacrifice that son. And Abraham? He raised not a whisper of protest. Was this because he knew it was a test? Or was it evidence of an irrational faith? Perhaps it was simply a lesson for us that God does not require human sacrifice as was common then. Abraham dutifully built and altar and only as he raised his knife to cut his beloved son’s throat did God relent and send an angel to stay his hand.

Abraham never stopped having faith in God, but he also had a boundless love for his family. He loved Sarah, and had reluctantly accepted her suggestion that her maidservant Hagar should conceive by him. When Sarah later felt humiliated by Hagar and her son, he supported her. He loved Hagar’s son Ishmael. But he deferred to God’s instructions to obey Sara when she insisted that Hagar and Ishmael leave, so as to avoid conflict. Yet the relationship between the two families and rivals was maintained. In the end both sons not only lived in the same place, Hagar’s Beer Le Chai Roi, but also came together to bury their father.

Through all the trials, Avraham tried to take care of every aspect of his family life. Whether it was finding a wife for Isaac; buying the family burial place, the Cave of Machpelah; or ensuring that there would be no arguments over his estate by making settlements on his other offspring, the sons of his concubines. Abraham showed both love and practicality in taking care of his affairs.

There are of lots of Jewish legends about Abraham found outside of the Torah. Most famously how he persuaded his father that idols were powerless by smashing them and putting a hammer into the hands of one, whom he blamed for smashing the others.

My favorite, because it is so romantic, regards the wife he took after Sarah died. It’s not well known, but the Bible says that Abraham’s second wife was called Keturah. The rabbinic legend, however, says that she was really Hagar. They loved each other all along, the legend imagines, but Abraham’s primary loyalty to Sarah above all others was so strong that Hagar knew she could never have Abraham as long as Sarah was alive. And so, she kept herself for him alone even after he had sent her away. Keturah, says the commentary, was Hagar’s code name and it meant she was a good person, her actions were as sweet and good as incense, ketoret. Or perhaps it meant that she bound herself, keshurah, cut herself off from all men until Abraham was free to marry her.

What a romantic notion. And one that is precisely how later generations came to think of Abraham. That in the end, the message of religion is that the love of God and human beings can overcome the hurdles and complications that we all face and that are part of life on earth regardless of how spiritual we may be. Love can conquer all. And what an example Abraham was, spiritual, courageous, humane and loving. A great uncle, father, husband and capable of immense love. And it is this love for God and mankind, the faith in God and good people that he stood for and gave us his example to follow.

None of the commentaries questioned the legitimacy of the relationship between Abraham and Keturah.