This is an unusual and idiosyncratic solution.

Many vegetarians (those who use the Haggadot of Robert and Roberta Kalechofsky) use a combination of “dry” barley or wheat (wrapped in plastic wrap) along with olives and grapes. This second option comes with a modern midrash as its prooftext:

“As vegetarians, in place of the shankbone, we place olives, grapes, and grains of unfermented barley, which symbolize the commandments of compassion for the oppressed, to be found in the Bible. We use olives to commemorate the commandment to leave the second shaking of the olive trees for the poor, we use grapes to commemorate the commandment to leave the second shaking of the grapevines for the poor (Deuteronomy 24:20), and we use grains of unfermented barley (or other unleavened or unfermented grains), to commemorate the commandment not to muzzle the ox when it treads out the corn in the fields (Deuteronomy 25:4), in other words, to recognize the natural appetites of the animal and not interfere with them. This commandment is considered to be the oldest extant concept of ‘animal rights,’ and enshrines the dignity and rights of the animal.”– Haggadah for the Liberated Lamb (1985 [the next-to-last unnumbered page before the seder begins], 1988) and Haggadah for the Vegetarian Family (1993).

This is truly “liberating” the lamb, as it makes no mention of the lamb and has nothing at all to do with the role the lamb played in the Passover story nor the ancient biblical world.

A more common practice referred to among vegetarians is the use of a beet on their seder plate in place of a zeroa. The earliest reference to this I have found is in The Jewish Catalog (1973), page 142 in the sidebar:

“For vegetarians, who may object to using a lamb bone on the seder plate (as a remembrance of the paschal sacrifice): it is halakhically [legally] acceptable to use a broiled beet as a replacement.”

Those who use a beet refer to Pesachim 114b as their prooftext. I have read this passage numerous times. The only reference to a beet is:

“What are the two dishes? –Said R. Huna: Beet and rice. Raba used to be particular for beet and rice, since it had [thus] issued from the mouth of R. Huna. R. Ashi said: From R. Huna you may infer that none pay heed to the following [ruling] of R. Johanan b. Nuri. For it was taught, R. Johanan b. Nuri said: Rice is a species of corn and karet is incurred for [eating it in] its leavened state, and a man discharges his duty with it on Passover. Hezekia said: Even a fish and the egg on it. R. Joseph said: Two kinds of meat are necessary, one in memory of the Passover-offering and the second in memory of the Hagigah. Rabina said: Even a bone and [its] broth.”

The only inference I see that this has to do with the zeroa appears at the very end, where the text states that “two kinds of meat are necessary, one in memory of the Passover offering [the zeroa] and the second in memory of the Hagigah [the beitzah].”

“Those who are referencing Pesachim 114b as the source are mixing issues. Pesachim 114b’s citing of the beet and rice are to the two extra dishes on the table that are mentioned in the preceding Mishnah as being required at a seder table with matzah, maror, and haroset. This was proof of the early practice that a seder should be a vegetarian meal so as not to give any appearance in a post-Temple world that we were attempting to replace or offer our own zeroa without the Temple. The later additions of meat dishes as representing the Paschal sacrifice and the Hagigah in the Gemara are just that, later additions from a differing and apparently persuasive tradition. This is also where the addition of the zeroa on our plate come from.”

The beet used today in veggie seders is actually meant to replace the zeroa due to its blood-red color, which also reminds us of the Paschal sacrifice. To my knowledge, it is not connected to Pesachim 114b but rather an innovation for modern-day vegetarians who may or may not have realized how connected to tradition they actually are through a veggie seder.

Cynthia Baker of the Department of Near Eastern Studies at Cornell University offered a different explanation for the beet:

“What is the meaning of the beet? It is here to remind us of an incident that occurred in 1945, when women slave laborers in Buchenwald concentration camp changed a negative definition to a positive one. ‘It hit me suddenly that the Haggadah could have been written for us. If I only changed the tense from past to present, it was written about us…. At this time, the scene in the barracks was bad, there was really fighting, cursing, and yelling… so when I asked the women to be quiet it was like a miracle, this absolute silence in the barracks. I started the seder by asking why is this night different. And I said that every night we quarrel and we fight and tonight we remember. There were close to a thousand women there. I picked up the slice of sugar beet and I said, this is the bread of our suffering…. And then we made a vow that if we survived, a beet was going to be on our seder table.'”

I don’t know where the account comes from, but it’s the one I’ve seen and heard most often.

Vegetarians in the Jewish community have searched for a suitable replacement for the zeroa (shankbone), one of the components of the seder plate. There have been a number of candidates, the most popular being the beet. Reprinted with permission of the author from www.davka.org.

Placed on the Passover seder plate to remind us of the pascal lamb.

The lamb shank (Zeroa) is a crucial component of the seder plate, a reminder of the Korban Pesah (Paschal Lamb) ... 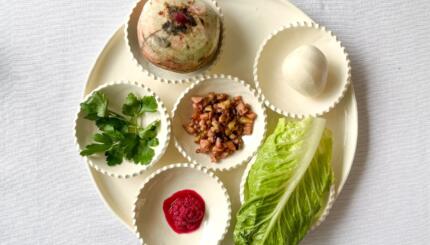