Thinking about Parashat Tetzaveh during President Barack Obama’s first week in office created some internal dissonance for me.

Watching the inauguration live in a bar in downtown Jerusalem made me feel proud to be from a country where an intelligent person from a relatively modest background can, through hard work, become the democratically elected leader of the most powerful free nation in the world. Reading Parashat Tetzaveh made me less proud: the highest ritual role in the Jewish nation, the kehunah–or priesthood, is assigned by birth, rather than by merit or popular vote.

At the outset, the kehunah smacks of hierarchy and privilege. Parashat Tetzaveh describes the elaborate, lengthy process through which Aaron and his four sons were consecrated to be priests. In future generations born to these sons, Nahmanides notes, there will be no consecration: birth alone will confer leadership.

As an example of this privilege, Parashat Tetzaveh describes, at great length, the special clothing worn by the Kohen Gadol, or High Priest. The clothing was “for dignity and adornment,” and Nahmanides equates each of the priestly garments with royal attire popular at the time.

In a society in which we value democracy and strive to assign leadership based on merit, what can we learn from the priesthood? A closer look shows that although the kehunah is an inherited honor, it is a role defined by service, not self-aggrandizement.

Rashi explains that the word “kehunah” itself means “service.” Called avodah, or work, the priestly service involved the hard physical labor necessary to prepare and offer all of the daily, Shabbat, Rosh Chodesh, and holiday sacrifices for the Israelites.

Lest one think that the kohanim served in pursuit of their own glory, the phrase to “be priests for Me” appears four times in Exodus 28 and 29. The clear emphasis here is that the kohanim were the servants of God. They also recruited others in the service of God: the word “l’shareit” (“to serve”) is used to describe the purpose of the golden bells and pomegranates on the hem of the High Priest’s coat.

Hezekiah ben Manoah, a thirteenth century French exegete known as Chizkuni, explains that these bells rang while the High Priest performed the service in the Temple, so that the Israelites would hear him and turn their hearts to God.

The Talmud says that each article of the High Priest’s clothing atoned for a different Israelite sin: the coat for bloodshed; the linen trousers for sexual impropriety; the mitre for arrogance; and so on throughout all eight garments. Thus, their elaborate attire, which at first seems to unnecessarily separate and elevate the priests, is actually a symbol of their service to God and the people.

Despite its hierarchical nature, the kehunah had many redeeming elements. It conveyed that service was a priority in Israelite society, indicating, through the royally-inspired clothing, that the role of public servant was honorable and important.

Transference of this role by birth ensured that a percentage of the Israelite community was constantly engaged in service for the greater good–an early model of compulsory service. By binding the nation together and reminding them that they were a part of a greater whole, the kehunah also promoted peace amongst the Israelite community.

We Are All Priests

While the priesthood offers us a compelling model for the importance of service, it was still limited to the priests, a narrow slice of Israelite population. Yet the Bible democratically declares that service is not just reserved for this select, elite few. Earlier in Exodus, God proclaims: “And you shall be for me a kingdom of priests and a holy nation.”  This declaration implies that the role of servant was not limited to Aaron’s descendents: it was and is for all of Israel.

Rabbi Yitz Greenberg articulates a compelling vision for Jewish public service, which he presents as an outgrowth of the Jewish idea that every human being is created in the image of God. This suggests that each person has infinite worth and that our obligation to other human beings is therefore limitless.

This obligation, Greenberg states, can be discharged only through public service, which he defines very broadly in economic, social, physical, psychological, mental, and emotional terms. He concludes that “service must be upheld as a norm expected of Jews” and suggests the eventual goal of a year or more out of every Jew’s life to be devoted to public service as a communal norm.

Let us each accept the mantle of obligation upon ourselves to truly be a kingdom of priests, committing ourselves to serve our communities, God, and the world, so that our belief in the infinite worth of each human life is truly reflected in how we spend our time and resources.

The metamorphosis of Aaron and his sons into priests was a process wholly transparent to the nation. 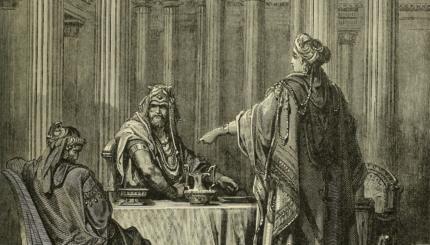 Both Parashat Tetzaveh and the Book of Esther are missing some central characters.

Parashat Vayikra is filled with the killing of animals.