Jews in Television #1: Mazel Tov on Becoming a Dad

Ode to the West Wing

Usually, I’m very much not a TV drama watcher. I like comedies. They’re a nice distraction on bad days and a reminder of the wonderful things in our world on the good ones.

Especially during the pandemic, I’ve been watching TV comedy after TV comedy. But recently I made an exception and started watching The West Wing, an NBC political drama that aired for seven seasons between 1999 and 2006. The show follows the lives of the fictional President Bartlet and his White House staffers, namely the Chief and Deputy Chief of Staff, Communications Director, Deputy Communications Director, and Press Secretary.

The West Wing was created by Aaron Sorkin, who was also the main writer for the first four seasons. Its executive producer (and often director) was Tommy Schlamme (yes, it rhymes). Who are Sorkin and Schlamme? Besides being widely respected (and highly awarded) TV, Broadway, and Hollywood talents, they’re Jews.

If there are any other big pop culture nerds out there, I’m sure you’re familiar with some of the main Jewish TV tropes— the Jewish Mother, the Jewish American Princess, and the Ambiguously Jewish character.

The West Wing is amazing to me because in its very first episode, it sends a very clear message that it won’t fall into the trap of that last (and perhaps most common) stereotype of the Ambiguously Jewish character. From the get-go, The West Wing’s writers and directors put real, complex Jewish characters on screen.

Josh Lyman, the Deputy Chief of Staff, and Toby Ziegler, the White House Communications Director, are both Jewish and unashamed of it. By the end of season one, we learn that Josh’s grandfather was a Holocaust survivor, which strongly influences Josh’s worldview (1.18 “Six Meetings Before Lunch”). We also learn that Toby is a synagogue-attending Jew whose moral and political compasses are informed by Jewish tradition (1.14 “Take This Sabbath Day”).

Josh and Toby share the Erev Yom Kippur tradition of apologizing to people before asking forgiveness from God with the Catholic President Bartlet (3.5 “On the Day Before”). I’ll be the first to admit this episode has a less-than-accurate description of this important spiritual tradition, but sharing this Jewish content is still an awesome moment for a TV show.

And beyond the honest-to-goodness Jewish characters who we rarely see on TV, the show is infused with its creators’ Judaism. Even the non-Jewish characters slip in little Jewish references that make me feel like the actual target audience of the show. During a campaign stop in season three, the very not-Jewish Bruno Gianelli, played by the very Jewish Ron Silver, asks Toby to write a speech “that doesn’t make me think I’m sitting shiva someplace—black curtains on the mirrors” (3.2 “Manchester: Part 2”).

It’s moments like these that make me feel seen and spoken to in a way that very little else on TV ever has. That’s not to say that the Jewish representation on The West Wing is perfect. Far from it. In fact, it’s all very New York-centric Judaism. But, for our southern and Jewish representation, we can turn to the director/executive producer Tommy Schlamme, who grew up Jewish in Houston, Texas.

And for some bonus Jewish content, you can check out The West Wing Weekly, a podcast hosted by Joshua Malina (a Jewish actor who plays White House staffer Will Bailey for seasons four through seven) and Hrishikesh Hirway. Malina’s influence means that the podcast discusses all the best Jewish moments on the show. Plus, they have southern and Jewish Tommy Schlamme as a guest on the podcast a few times.

So if you, like me, are looking to feel represented in a real way on TV, look no further than The West Wing. And we can all keep our fingers crossed that a show with some good southern Jewish representation will come along soon. 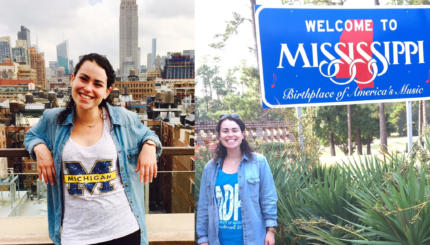 A Yankee Perspective on the Jewish South

What makes a Southern Jew different from a Northern Jew?

Jewish Characters on TV: The Best of 2009

There are lots of characters on TV that happen to be Jewish. Like the emergence of African Americans into mainstream ...