Dr. Ephraim Isaac was the first Ethiopian-born student to attend Harvard Divinity School, from which he graduated in 1963 with a bachelor of divinity, and the first to receive a PhD from Harvard. Last month Isaac, who is now 83, received a 2020 Peter J. Gomes Distinguished Alumni honor from HDS in a ceremony held on Zoom. Below are excerpts from his acceptance speech.

As a boy in Ethiopia in the early 1950s, I attended the Swedish Mission School in the place of my birth, Nejjo, Wallaga. With humility, I must admit I was the favorite student of the Swedish teacher and headmistress, the late Stina Ljungberg. She considered me her best student and instilled in me a love for Sweden. When I heard the Late Archbishop Krister Stendhal, Dean of Harvard Divinity School, was from Sweden, I took the initiative to write him for an interview and came to Cambridge to see him. He encouraged me to apply, and that is the beginning of my Harvard journey.

My father, a Mori/Rabbi of the Yemenite Jewish tradition, taught me the Hebrew Bible. (Yemenite Jews memorize the Hebrew Bible by heart and are regarded as the most knowledgeable Jews, having preserved the pronunciation of the ancient Hebrew Language.) At HDS, I wanted to learn about the New Testament and took Prof. Helmut Koester’s class. I also wanted to learn more about the distinguished religious history of Ethiopia, which the Psalmist says “raises her arms unto the Lord.” I had read that Ge’ez/Ethiopic was one of the first seven world languages to receive the Bible. Important lost Jewish books of the Late Second Temple period, the Book of Enoch and Jubilees, were found only in Ge’ez/Ethiopic versions.

Unbelievably there was not a single course at the Harvard Divinity School on Ethiopian church history and classical Ge’ez literature. So I went to Dean Stendhal and Prof. George Williams, one-time Dean of the Divinity School himself, to ask if I could do an independent study on Ethiopia. Fortunately, they both encouraged me to do so. Prof. Stendhal even started a seminar course on the Book of Enoch that I took. Prof. Williams, whose ancient church history I took, became my special advisor in the study of Ethiopian religions and history.

While I was at HDS, I resided in Divinity Hall, and with some of my dormmates I attended meetings of the Student Nonviolent Coordinating Committee (SNCC). I vividly remember the days of the peaceful marches in the 1960s, in which religious leaders participated. I was fortunate to have once met and greeted the Rev. Dr. Martin Luther King, Jr., and befriended the late Kivie Kaplan Boston, life member of the NAACP, and James Farmer, a founder and Director of Congress of Racial Equality (CORE).

Sadly today, however, we still see videos of real graphic white supremacist and racist ideology that openly say Blacks are inferior. Being of proud Ethiopian origin, over the years I have experienced myself the prejudice that exists in society, even including academia. Indeed, in the 1960s, when I was a student at HDS and then the Harvard Graduate School of Arts and Sciences, I could not find a single course on African languages and cultures. It was like whole cultures were dead.

On the other hand, I found in the library the works of Luis Agassiz of Harvard, Yale graduate John C. Calhoun, Herbert Spencer of England, Lévy Bruhl of France, Hegel’s Philosophy of History, anthropometry and eugenics research studies that demeaned and degraded Black people. (I also found works by Black writers like William Wesley Brown, W.E.B. DuBois, and others who decried racial hatred.) The treatment and murder of Black people and prejudice against them is deeply rooted in the fundamental lack of respect for the cultures and history and peoples of African origin, as well as the resistance to hiring and employing highly qualified Black scholars as professors. If we religious leaders do not speak out and correct this situation, who will?

Since my first days in the States, I have seen some progress made. I am glad to say that I struggled together with the African and African American Students Association to establish Harvard’s now well-known Department of African and African American Studies. As the first professor hired in the Department, I gave the first courses ever at this University on African languages and religions. I even introduced the first course ever on the “Concept and History of Slavery” going back to ancient times.

Despite the progress that has been made, I believe we still have a long way to go, even in academia. I know of instances even today where less qualified white professors are hired over more qualified native Africans to teach African Studies. This is not a forum to blame anyone, but a clarion call to university administrators and faculty members, who are equally responsible, to fix the problems.

During my time at the Divinity School, I helped develop the Ethiopian National Literacy Campaign that taught about two and a half million Ethiopians to read and write during 1961-1974. I am most proud of that important achievement. My other activities as a member of several peace-building organizations were all influenced and motivated by my interest in religion, which HDS fostered and cultivated. Among other positions, I served as chairman of the Board of the Ethiopian ad hoc Peace Committee, which helped negotiate the end of the Ethiopia-Eritrea war. My present activities for Middle East peace are focused on Iran and Yemen. I wish to extend my gratitude to all who collaborated with me in my peace and educational activities.

This honor is also for my beloved country of Ethiopia and its wonderful people. It is the land of Lucy that Diodorus Siculus already in the first Century BCE called the origin of humanity. The Greeks, the Hebrews, the Persians, Prophet Muhammed, the famous Renaissance humanist Damião de Góis all hailed Ethiopia home of a tolerant, just, hospitable, and peaceful people. Afroasiatic, a most important family of languages, ancestor of Semitic, ancient Egyptian, Cushitic, Berber, Chadic, et al. is thought to originate in Ethiopia. It is a country for which I have humbly served to spread education and promote peace. 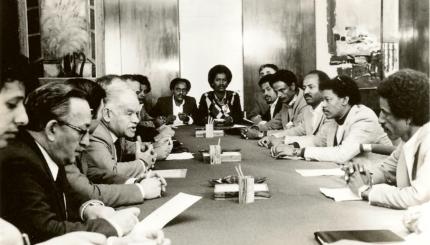 For one Hasidic master, Shabbat is not the weekend, but the sacred center of the week, which illuminates the days before and after.