Isha Clarke thought the environmental movement was just for white hippies. Then in 2017, as a high school freshman, the Black and Jewish teen attended a protest against the proposed construction of a coal export terminal in her West Oakland neighborhood. (The project has been delayed by an ongoing court battle.)

Feeling empowered by that experience, Clarke became more involved in environmental activism and co-founded Youth Vs. Apocalypse, an organization of young climate justice activists in the Bay Area. The group attracted national attention last year when they confronted Sen. Diane Feinstein in her San Francisco office about supporting the Green New Deal.

Now 17 and the recipient of a 2020 Diller Tikkun Olam Award, Clarke believes that climate justice and racial justice are connected. “Climate change is the consequence of fundamental systems of oppression like white supremacy, racism, and colonialism,” she said. “Because of this, people of color, indigenous communities, and working-class people are disproportionately burdened by impacts of climate catastrophe.”

I recently chatted with Clarke, who plans to enroll at Howard University in the fall of 2021, on Instagram Live. We spoke about the struggle against “environmental racism,” why young people should get involved, and how she practices self-care. Below are edited excerpts from the conversation.

What exactly is environmental racism?

What role do young people and people of color have to play in the struggle against environmental racism?

Before I started getting involved with climate issues, I didn’t feel connected to it at all because [the environmental movement] was advertised by the mainstream media as very white and hippie and woo-woo, and that didn’t feel like something that I connected to. And so I never plugged into it. But as a freshman in high school I was invited to participate in an action that was targeting Phil Tagami, who is a prominent developer in Oakland. He was and still is trying to build a coal terminal through West Oakland, which is where I live and is a community that is predominantly low income and of color and that already is suffering from extremely high rates of health issues that are related to poor air quality and water pollution.

Youth Vs. Apocalypse came out of that action. It was a group of me and some other middle and high school students, predominantly of color, who wanted to be a part of an environmental movement that called out what the actual issue is: Low-income communities of color being intentionally targeted by pollution and having years taken off of their lives because of that. This narrative of the environmental movement being “white” and “of privilege” is just false.

You’ve been doing social activism for a very long time. I’m assuming that it comes from a family history…

Yeah! I have grown up in a family that has their hands in change and in politics. The first person that comes to my mind is my grandpa, who is an amazing human being and has really dedicated his life to fighting for the people, specifically through the child welfare system. He was involved in a lot of actions around the Vietnam War, and he was just an all-around hippie activist, so I come from that lineage.

When I was younger, dinnertime conversations would be about politics and justice. I grew to learn about those things with my family and grew up participating in those conversations, and so now I’m sitting here as a byproduct of that way of growing up.

Could you tell us a little bit more about what inspires you to do this work?

Right now we are experiencing an unprecedented movement in history, and that is scary as hell. But it’s also motivation because we have this unique opportunity to be able to actually dismantle these systems of oppression and build something new in its place. If we don’t, then human beings literally will not be able to exist on this planet anymore. At this point justice is about the survival of every single living thing on this planet, no matter what your species is, no matter what color you are, no matter what your gender or sexuality is, none of that matters. It’s about our survival as human beings.

Since you spend a lot of time participating in community actions that are often based on painful experiences and life-threatening issues, how are you practicing self-care?

One thing I’d like to say to all of my women identifying folks, to all of my people of color, especially my Black and indigenous folks, I think it’s important to recognize that self-care is especially important to practice and to be intentional about. Part of racism and sexism and a lot of other systems of oppression that we face is people feeling that they have unlimited access to our energy and to whatever we have to offer. So to my Black women especially, know that by taking time for self-care you are literally challenging systems of oppression. You’re saying, no, I’m turning off my access right now and I’m focusing on me and I’m replenishing me.

How can more young people get involved with the fight for environmental justice in their communities?

The first step is getting all of the education that you can, reading, even just going outside and looking at what you see. Right now I’m sitting here and I’m looking outside at this freeway that passes right through a residential area. For me that’s a sign of environmental racism. I live near McClymonds High School in West Oakland, which just got shut down because of some chemical that was giving people cancer. I’m sure if I kept walking around my neighborhood I would see a lot of other signs.

To all my young people, your voice is so important and no matter if you’re just starting out or if you’ve been doing this for a while, there’s always more to learn, there’s always ways to grow. Don’t let anybody tell you that you don’t matter because you do. I love you and I’m sending you energy.

The Importance of the Community (Kehilla) in Judaism

The collective is an integral part of the Jewish experience. 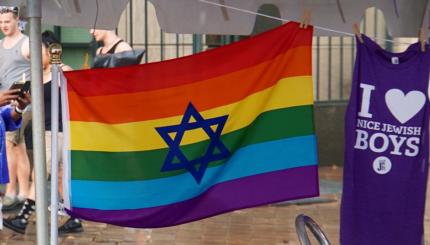