Today marks the end of the most prolific counting of days in the Jewish calendar. S’firat ha’Omer, the Counting of the Omer, consists of a seven-week period from Passover to Shavuot.  It is a poignant time-span in Jewish national consciousness, connecting us alternatively to our agricultural heritage and dependence on God’s beneficence, celebrating the journey from Exodus in Egypt to the moment of revelation at Mount Sinai, commemorating a lengthy lamentation of Jewish persecution, and offering a complex mystical-psychological matrix for spiritual development. But this year I have struggled to apply any of these contexts to S’firat ha’Omer. In the wake of Covid-19, is there any meaning left in a time-dependent ritual? What does it mean to celebrate the end of a period of days, culminating in the festival of “Weeks,” at a time when days no longer carry distinct meaning?

We have all lost track of the meaning of time as the days of social distancing have morphed into indeterminate weeks and now months. Staying at home all the time (except for those precious trips to the grocery store for supplies and desperately needed human interaction), wearing sweatpants day in and day out, hopping on and off Zoom calls, and repeating the same mundane routines, time no longer conveys distinction.

But time delineation is pivotal in Judaism. We differentiate between secular (Hol) and holy (Kodesh) based on circumscribed times in the Jewish calendar. And Judaism is very specific not only about these designated times but also about the way that we count them. Most famously, in the Babylonian Talmud, Tractate Shabbat 21b, the rabbis discuss a debate between the Academy of Shammai and the Academy of Hillel about how to celebrate Chanukah: Shammai argues that we start with eight candles on the first night and count down to one candle on the final night, while Hillel argues the opposite. The rabbis ultimately side with Hillel based on the principle of “Ma’alin bakodesh, ve’ein moridin”—in matters of holiness, we should always ascend and never descend. The great sage Maimonides applied similar reasoning in explaining why we count the Omer starting at one and culminating in 50. In his Guide for the Perplexed III:43, Rambam wrote: “In order to glorify and exalt [Shavuot], the days are counted from the first of the festivals up to it, as is done by one who waits for the coming of the human being he loves best and counts the days and the hours.”

This notion of counting up is all well and good from the perspective of historical halakhic development, but it no longer comports with our modern understanding of time. As my 4-year-old daughter with an impending June birthday reminds me hourly, we normally count down the days towards a fixed date, not up. We say that there are X days left until we arrive at a birthday, anniversary, or (in the case of my older kids) summer vacation. On New Year’s Eve, we count down the minutes and then seconds until midnight, not up. Counting up is indeterminate, indefinite; counting down is fixed and finite. Perhaps this accounts for why it is so hard to keep up with the simplistic task of counting the Omer for each of the 49 nights.  How, then, can we mitigate this conflict between the Jewish normative framework of counting up with the modern conception of counting down?

A third, Hasidic/mystical approach is to forget about counting up or down but to focus on the intrinsic worth of each Omer day. Rabbi Avraham Mordecai of Ger, a 20th-century Polish rabbi (credit and appreciation to Rabbi Gordon Tucker for introducing me to this source) focuses on the biblical timing of the days of the Omer preceding the revelation at Sinai and the subsequent sin of the Golden Calf in explaining why these days themselves are holy.

For these days of the Omer preceded the Israelites’ receiving the Torah. And it was only after that that they sinned. Thus, the days that we count are the days that precede sin, which came only after the receiving of the Torah. Now even though Israel eventually sinned, there already was, despite that, a residue in each person of that which existed prior to the sin. It is that residue that provides strength for everyone’s future since we are always able to draw on those innocent days. In fact, the holy Rabbi Isaac Luria said that whatever power a person has in his or her allotted years on earth comes only from these precious days, i.e. from the days of youthful innocence, before there was any taste of sin. So even though every person is destined to fall from that pedestal of innocence, there is yet in every person something from before the sinning, on which he or she can draw…..Therefore, a person should never, God forbid, lose hope in himself/herself, for there is always the possibility of reawakening that residue, which always remains from his/her prior days. (Likkutei Yehudah, Parashat Emor.)

The days of the Omer, according to Rabbi Avraham, are like the stem cells of the Jewish people, regenerative moments before the Israelites’ “original sin” of the Golden Calf that we can continually draw upon for spiritual and emotional rejuvenation. Relatedly, the Slonimer Rebbe, Rabbi Shalom Noah Berezovsky, writes in his Netivot Shalom commentary on S’firat ha’Omer, that the

“…work of Sefirat ha’Omer should be specifically in the secular and concrete elements of life, those of the ‘morrow of the Sabbath.’ Thus the seven weeks of the Omer are for finding elevation and holiness within that which is permitted, the bodily pleasures.”

These Hasidic masters are articulating a more profound, Jewish particularistic version of carpe diem. We should embrace the potential of each one of the 50 days of the Omer for the opportunities for meaning-making each one represents, no matter how quotidian the day appears to be. One rabbinic colleague recently embraced this approach to dealing with the Omer during the Coronavirus pandemic.

If I were to write this piece in any prior year, I would end it here. But this is not just any year. Covid-19 has obliterated the notion that carpe diem is a long-term sustainable strategy. I’d be lying if I claimed that I can embrace each day anew anymore. If this Coronavirus has taught us anything, it is that we can only stay in the moment for so long before the coherence and contours of the day slip away into an unintelligible fog (at least for those of us blessed to stay healthy and avoid the existential strains Covid-19 has placed on far too many). We are stuck in a pandemic that doesn’t seem to have an end date we can count down to or up from, despite the false messianism of anticipated “opening” dates, empty promises of miracle cures, and our illusory cravings for certainty and foresight. So where can we turn for some semblance of temporal sanity?

The best option, I believe, is to embrace the Jewish framework of cycles of time. The Jewish calendar is not linear but cyclical. It is based upon annual renewal, not a teleological journey towards “progress.” Shavuot 5780 (this year) is not inherently more or less holy or important than Shavuot 5779 was or Shavuot 5781 will be. But it does orient where we are relatively within the year 5780, giving us the opportunity to embrace (even if only via Zoom or live streaming) cheesecake, late-night Torah study, and everything else Shavuot can offer. We know that we need some structure to our days or else we all go Corona-crazy. But giving too much linear meaning to time risks a false idolatry towards endings and away from the inherent beauty and potential of each day. A cyclical orientation gives us a bit of structure but always leaves room for each day to matter. Purely counting upward (or downward) risks losing out on the inherent holiness of the days we count past, whereas living for the moment can only be maintained for so long. Finding a balance between these extremes is, I think, the true spirit of S’firat ha’Omer. It also is a pretty good prescription for navigating the remaining days of Covid-19. I wish you all good happiness and moments of meaning and inspiration this Shavuot and throughout the rest of the year. Hag Sameah! 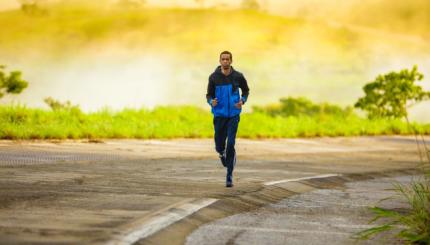 We need to be able to rest and recover from one run in order to perform at our best at the next one.

Almost eight years ago, on the evening of April 22nd, after a full day of labor, my husband Rick and ...