What makes the perfect story? Captivating plots, memorable characters, and articulate language, sure. As an enthusiast of novels and movies, I love that stories give us an escape from mundane life or, alternatively, allow us to look more critically at our values, biases, and decisions. When friends or acquaintances ask about my favorite film or book, my mind wavers in fear that I will carelessly disregard one piece over another. But eventually I always fall back on one heartfelt reply: The Princess Bride.

William Goldman, who sadly passed away in November of 2018, authored this brilliant fantasy work in 1973 and, years later, Rob Reiner adapted it into a celebrated film starring Cary Elwes, Robin Wright, and Mandy Patinkin. As the actual text explicitly mentions, The Princess Bride has everything: a kidnapping plot, an epic fencing match, the pursuit of true love, and the escapades of eccentric adventurers.

For me, The Princess Bride has special significance. On the evenings when my parents watched R-rated films, my sister Sarah and I ventured to the basement to hang out and watch VHS tapes. The Princess Bride was part of our regular movie lineup and became associated with the humor and joyfulness of growing up. The film’s setting also feels meaningful. As it begins, a young boy rests at home in a Chicago Bears jersey surrounded by colorful decorations and distracting toys. Such details were familiar based on my own upbringing in the Chicago suburbs; I felt like I could be the Fred Savage character.

Beyond these personal connections, I care about The Princess Bride because of its compassionate representation of the Jewish storytelling tradition.

Even if the movie itself is not overtly Jewish (although it has its moments…) the way it’s told resonates with Jewish tradition. For generations, rabbis and elders passed down the voice of their ancestors through parable and legend. Stories comforted children when they inquired about the world’s uncertainties and gave emotional substance to religious custom and law. While separated geographically, diasporic communities were connected by commonalities carried through their oral chronicles like the idea of triumphing over adversary through wit and wisdom. Storytelling figured largely in the development of my own cultural identity.

During the summers I spent away at Olin-Sang-Ruby-Union-Institute, our Shabbat celebrations were elevated by our camp director’s weekly stories. He retold the same tales each year, but successive listens offered new lessons as takeaways. The Princess Bride maintains the valuable exchange of storytelling as the film’s central grandfather character narrates an adventure to amuse his grandson.

As the on-screen action transpires, the grandson occasionally interrupts the narrative with his own commentary. He injects near the beginning “Hold it, Hold it! What is this? Are you trying to trick me? Where’s the sports?” The young boy’s frustration with his grandfather reflects that an audience influences a story just as much as its teller.

Indeed, as The Princess Bride makes quite clear, the best stories can be treated like a conversation between a giver and a receiver. The grandfather and grandson’s back and forth throughout the film illustrates that stories are a journey that people enjoy together, crafting plot and tone from their combined perspectives.

I hope that the example of The Princess Bride encourages you to spend time with friends and family and share stories. At the close of the book and film, the protagonists’ fate is still uncertain, but perhaps it is the perfect ending — the characters find peace in simply being together, with the next adventure just around the bend.

Why I Wrote “The Inquisitor’s Apprentice”

When I try to explain why I wrote The Inquisitor’s Apprentice — and why it’s emphatically not a Jewish Narnia ... 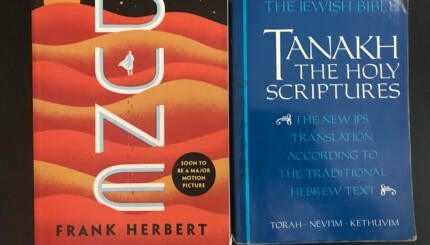 How Jewish is Dune?

If you haven’t schooled yourself on The Goldbergs — one of the first American sitcoms, a virtual one-woman show created ...