We were thrilled when we heard that Nice Jewish Boys of DC would donate the proceeds of their Mr. Nice Jewish Boy DC Pageant 2018 to Keshet. Such nice Jewish boys! Even better, the winner turns out to be former teen Keshet ally Jeremy Sherman.

We met Sherman when he was International Teen President of the Jewish youth organization BBYO. In 2011, BBYO signed Keshet’s pledge to end homophobic and transphobic bullying. In this pretty adorable video (love that Bieber ’do), a 19-year-old Sherman, speaks not as an openly gay teen but as an LGBTQ ally. He enthusiastically explains how Keshet inspired and supported a regional BBYO anti-bullying campaign, as well as an extraordinary, 800-person LGBTQ-inclusion rally at the BBYO international convention in LA.

“There were a lot of younger kids and younger teens that I don’t think knew explicitly in their minds that BBYO was a safe space for LGBTQ teens,” the now out-and-proud, 25-year-old Sherman says. “The partnership with Keshet made it very obvious that not only is [BBYO] a safe space, but you can be yourself, your authentic self, and be accepted. I knew that in my heart, but the relationship with Keshet said it loud and clear.”

Sherman grew up in West Bloomfield, Michigan, where his family belonged to a conservative synagogue. As a closeted kid, he was afraid of how his Jewish community would react to his homosexuality, especially given its emphasis on dating and marrying a Jewish partner. Sherman eventually came out in college, and both his family and his Jewish community embraced him. Because of the Keshet connection, Sherman’s Mr. NJBDC victory connects him to the high-school coming-out experience never had.

“My teenage years particularly in BBYO and through Jewish experiences were really transformative for me, and I know they would’ve been even more transformative had I had and known about that [Keshet] safe space earlier on. I’m most inspired by you all’s focus on teenagers and that critical moment and in that critical time in their lives,” he says, adding “It’s something I wish I always had, and I’m happy to now help support it for teenagers now.”

Sherman only recently moved to DC, where he works at Deloitte designing problem-solving experiences for executives. He decided to enter the Nice Jewish Boys Pageant at the suggestion of a friend. “I have a lot of friends in DC that are part of the gay community but they don’t sort of understand the Jewish upbringing that I’ve had in the background, and I also have a lot of Jewish friends in DC but they don’t understand and can’t relate to my gay identity, so I really want that intersection,” he says.

He is in a relationship with another nice Jewish boy. Does that make his family happy? “I think they are,” he says with a laugh.

Sherman doesn’t really have any official responsibilities as Mr. NJBDC 2018 but he’d like to use his imperial year to empower local Jewish LGBT teens. His message for them?  “Despite any fear you may have within your family or in your immediate community, know that there is a thriving community out there of Jewish LGBTQ young adult who are waiting to welcome you into the community.”

Day of Silence: Resources for the Jewish Community

One day each year, students across the country pledge to take some form of silence. In the hallways, in the cafeteria, they ...

A Space to be Young, Jewish, and LGBTQ

Last month, 76 teenagers, 9 college-aged CITs, and 18 adult educators from across the country joined together for our largest ... 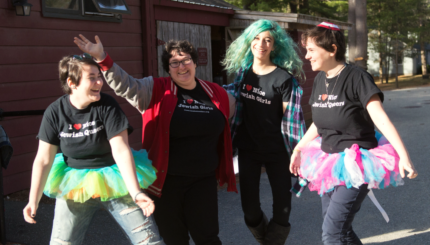