Rabban Gamliel, Mormons, and People Who Aren’t There

I recently had the opportunity to travel to Salt Lake City with a delegation of rabbis and Jewish leaders to meet with the leadership of the LDS Church. Under the leadership of Robert Abrams, former Attorney General of the State of New York and a passionate creator of dialogue and discussion between Jews and Mormons, and with support from the New York Board of Rabbis, we flew to Salt Lake City. The purpose of this delegation was to introduce us to leaders in the church and to allow us to learn about their religion, and most especially about the similarities between Mormons and Jews.

The Church of Jesus Christ of Latter-Day Saints, or the LDS Church for short, known as The Mormon Religion, is a ‘newer’ and a quickly growing religion founded in 1830 in the United States by Joseph Smith, whom they view as a modern-day prophet.  He published the Book of Mormon, the basic text for the LDS Church (and a great Broadway show). Fleeing from persecution, church members migrated westward until they discovered Salt Lake City, establishing their headquarters there.

Perceptions are everything, and many of my own perceptions about Mormons and the LDS Church were skewed.  I was completely ignorant about their overall mission and vision. I had no understanding of their overarching mission in helping the community, and I was also surprised to learn that there are approximately the same number of Jews as Mormons in the United States.

There are many similarities between Mormons and Jews, and also areas where we differ, yet there is no question that the leaders of the LDS Church feel a real kinship and respect toward the Jewish community.  There is also no question that there is much for Jews to learn from some of the incredible work of the Mormons.

The church leaders took great pride in welcoming us to their headquarters. They were so enthusiastic about sharing our visit with their greater community, as can be seen in this video. There is much that the Jewish community can learn from the Mormon community, and I hope that we can continue to dialogue about both our similarities and our differences, to support each other as groups of faith ultimately seeking to make this world a better place. 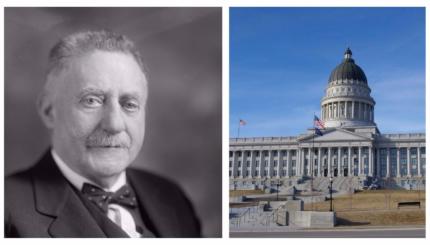 The Jewish “Gentile” Governor of Utah

Simon Bamberger was the first non-Mormon governor in a state where even Jews are "gentiles."

Is Gentile “Genteel”? (Or, What Should We Call People Who Aren’t Jewish?)

The other day, we had an extended discussion around the office about the proper term to use to refer to ...

What rights do we have to our soul?

Last week, while checking in on the latest articles on the Religion page of the Huffington Post, the following headline ...