Parashiyot Vayakhel and Pekudei: The Power of Embodied Love

In this week’s Torah portion, the first half of the double portion dwells lovingly on the generosity of the people in giving gifts to build the Mishkan, the portable sanctuary.  In the second half, Pekudei, the Torah continues telling of the skilled work of the “wise-hearted” in creating the beautiful vessels and decorations of the Mishkan. And then the Torah tells us that the people finished the work and proclaim, (ex. 29:43) “And Moses saw all the work…  and Moses blessed them.”

The Midrash Tanchuma notes that the Torah doesn’t say that “Moses saw all the work of the sanctuary,” but rather, “All the work: וַיַּרְא מֹשֶׁה אֶת כָּל הַמְּלָאכָה וְגוֹ” It explains that “all the work” isn’t just the work that the people did but all of God’s work of creation.

The Torah suggests that when the work is complete on the Mishkan, it is really a reflection on the work of all creation, and it is encouraging us to be expansive in the way we understand our actions in the world.  We think that when we do some action, it has a specific outcome, a narrow result that we can see and control. But the Torah is telling us that our actions – every one of them- when done in holiness is the work of creation that we partner in. When we act, our results don’t belong to us alone, but to all. And when our ancestors built the Mishkan, the holiness of their work and their generosity of heart allowed them to take part in God’s work – the work of all creation.

Unfortunately, we are living in a time of diminished generosity. We believe that our actions should be to protect only those who belong to us. That our wealth should only enrich our own families, that our work should benefit only those like us.  America has broken into splinters of societies, with each splinter hoarding for itself all that it can get, trying to prevent everyone else from getting a piece of what we believe is ours.

I’ve recently signed on to the revival of the Poor Peoples’ Campaign. We believe that it is our holy work to address poverty, structural racism, environmental degradation, the military economy, and most importantly, the moral tone of the national dialogue.

We are reviving the work of Dr. King, who also understood that to repair our national story, all of us would have to be willing to step beyond ourselves and offer our hands in generosity to one another. It will take a generosity of heart to address all the things that have caused us to splinter.

It is not by accident that in the first part of our portion, in Vayakhel, the artisans and craftspeople called to do the work of building the Mishkan and its objects are called “chacham-lev” – wise-hearted: Generosity is an act of wisdom. It is only when we are able to see the interconnectedness of our work and ourselves – that in building for one another, we bless the entire world.

Six Days Shall You Work

Shabbat is important, yet our behavior during the other six days is no less a part of religious life. 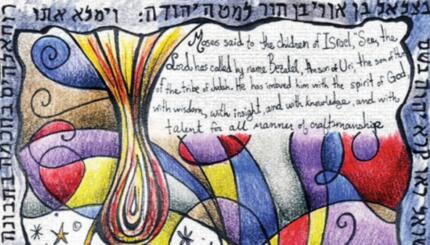 Parashat Vayakhel-Pekudei: Our Bodies, Our Holiness

This Torah portion teaches that holiness is not meant to suppress our physicality, but to elevate it.